After his starring role in the big-budget The Big Trail for Raoul Walsh in 1930, it all went pear-shaped for John Wayne. He had a few bit-parts in romantic comedies and appeared in non-starring roles in three dire Westerns for Columbia, and in 1931 reached his nadir playing a corpse. In 1932, however, he secured the starring role in Ride Him, Cowboy, the first of six Westerns for Warners, and in the same year the second of these was a talkie remake of the Ken Maynard silent Land Beyond the Law (1927) called The Big Stampede. 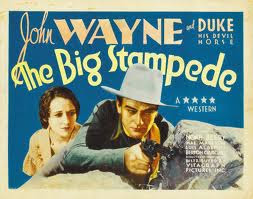 I see Duke is billed as "his devil horse". That's a bit unfair.
It’s about rustlers in New Mexico, led by evil cattle baron Sam Crew (Noah Beery Sr., who had started acting in movies in 1913 and was still at it after the Second World War), aided by the vicious Arizona (Paul Hurst, a character actor in over 300 films, many of them Westerns). Arizona wears his hat-string in front of his face which must have been as uncomfortable as it looks silly. He is seen beating a child, so is obviously evil (standard Hollywood code). Governor Lew Wallace (Berton Churchill, later the crooked banker Gatewood in Stagecoach) signs up undercover cop Deputy Sheriff John Steele to foil Arizona & Crew, and bring law ‘n’ order to the Territory. 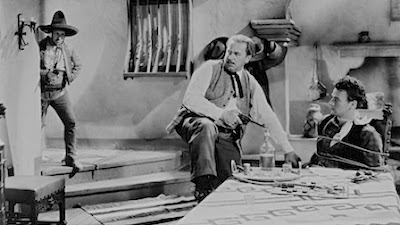 Noah gets the drop on Duke
Unfortunately, it also has the horse Duke in it (he usually got second billing) and Duke was one of those ‘intelligent’ nags who when ordered, can round up cattle, knock on a door and so forth. He was probably a role model for Trigger. Doubtless it was considered hilarious then, or lovable. Now it’s just dumb. 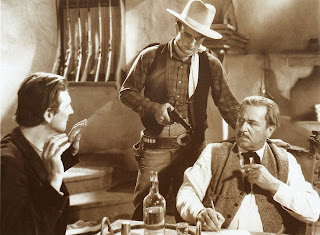 Duke gets the drop on Noah
Catalan Luis Alberini plays Sonora Joe, a joke Mexican guaranteed to annoy all south of the border. He becomes Steele’s deputy (for the hero cleverly recruits the less bad baddies to thwart the badder baddies) and provides ‘comic’ relief. There’s also an irritating small boy with a slingshot, Sherwood Bailey, who was then famous for nine films he made as the boy Spud. He has the same comic aim as Sonora but is equally annoying.


The love interest is pretty Mae Madison, fresh from roles such as ‘second nurse’ and ‘café maid’. This appears to be her only co-starring role.

Moderately big, in fact
Tenny Wright directed it, one of only four films he did. These Wayne movies for Warners got gradually better and the following year Wright directed Wayne in the very enjoyable and really quite professional The Telegraph Trail.


54 minutes of black & white, The Big Stampede is energetic enough and there are thousands of head of cattle, so no expense spared.