A bit short on Terror but still fun

John Wayne, 28, is a young sheriff, John Higgins, in Texas Terror. Chasing some Dastardly Robbers, he shoots into a cabin and upon rushing in thinks he has shot dead his friend, a rancher (though it was the DRs that did it). He resigns, grows a beard and becomes a recluse in the woods, befriended by Black Eagle and his tribe. No one knows who played Black Eagle but his performance was a masterpiece of bad acting. 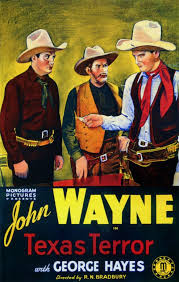 I think that's supposed to be John Wayne on the right
Then one day the dead rancher’s daughter (Lucile Browne, twelve Westerns 1930 - 37) arrives on the stage. The stage is attacked. Nothing unusual for a B-Western there, you may say. But hold! For the stage is a Model T with the word STAGE painted on it. The driver is killed by the bandits and bearded John, scooping up the damsel, takes the wheel and speeds into town. 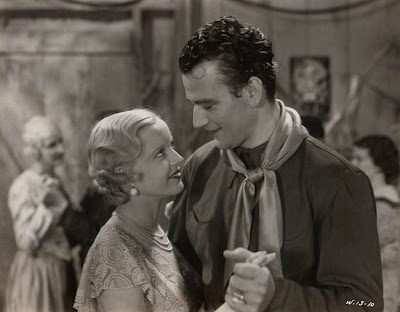 Duke romances Lucile
For the further ramifications of this gripping plot you will have to watch the movie.


There’s a lot of rather odd staring into the camera and saying lines slowly, presumably ordained by B-Western specialist, director RN Bradbury (who also wrote the story). The dialogue is wooden and the delivery of the lines by the actors equally so. The music is desperately old-fashioned; just like a silent movie.


There’s a Hallowe’en dance with a Virginia reel and a milking contest won by Aunt Martha (Fern Emmett). Gripping stuff, you will think, and I bet you can’t wait to buy the DVD. I hope they haven’t censored it by cutting out the scenes of gratuitous cow-milking, though.


The baddy, Dickson, looks a bit like Richard Nixon. He is played by Leroy Mason.

Richard Nixon                Leroy Mason
One of his cronies is played by Buffalo Bill Jr. (Wilbert Jay Wilsey). Yakima Canutt does the stunts, of course, though he doesn’t appear as an actor as he did in many of these Lone Star pictures. The already bearded Gabby Hayes, who accompanied Wayne in Westerns throughout the 1930s, is the sheriff who takes over from him once Wayne has grown his own beard. 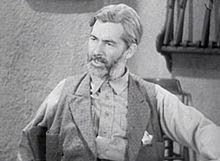 Sheriff Gabby
Wayne’s beard soon goes, however, as he shapes up and becomes the ranch foreman. He wears an unDukelike and rather dudish gunbelt. He does, however, exhibit that dandy roundhouse punch with both his right and his left. Quite impressive. A very handy addition to your armory in your next saloon bar fight.


Archie Stout was behind the camera again, though uncredited.


In the end a sidekick delivers himself of the opinion which you doubtless share, “Women are sure queer critters”.
But perhaps, because it all comes right and John  gets the gal and all the misunderstandings are cleared up, champion milker Aunt Martha sums it all up best by saying, “Like this fellow Spearshake says, ‘All’s well that ends well’.”