Lowbrow, maybe, but that suits me

Although many ‘comedy Westerns’ were dire, some were splendid. The Sheepman was the best of the 1950s, we had the magnificent Blazing Saddles in 1974 and in between we had these two most amusing oaters. Significantly, Support Your Local Sheriff! was written by William Bowers, who penned The Sheepman and what they share, apart from wit, is a love of the genre. They are affectionate parodies.


Burt Kennedy, who directed both, wrote and/or directed a whole heap of excellent Westerns. One thinks of the Randolph Scott/Budd Boetticher series or the very good Clint Walker ones like Fort Dobbs and Yellowstone Kelly. But he also did a number of comedy Westerns (Dirty Dingus Magee, Hannie Caulder and above all, one of my favorites, The Rounders). Kennedy understood and loved the genre, and it shows. 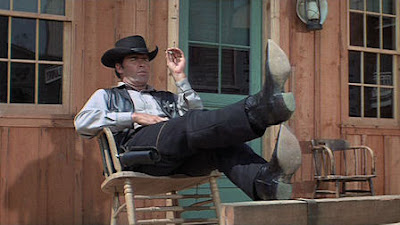 Garner doing his Henry Fonda Clementine act. Well, he was Wyatt Earp. Twice.
The most successful element of both Support movies was the casting. James Garner had established a character and a style through years of Maverick on TV and he brings the same self-effacing humor and grit to this movie. He is just right as the sheriff “on his way to Australia”, as he endlessly reminds us, who cleans up the town and in episode 1 gets the accident-prone tomboy daughter of the mayor. Joan Hackett (from Will Penny) as the girl and Harry Morgan as the mayor are both absolutely excellent. 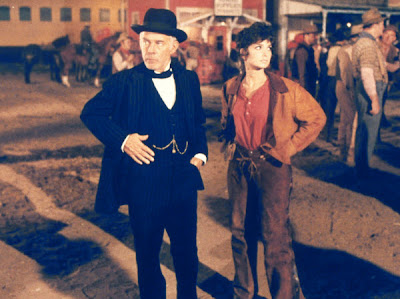 Harry Morgan was never successful in serious Westerns, for example as a heavy – you keep laughing - but was a comic genius. Then the choice of Walter Brennan to reprise and gently mock the ‘Old Man Clanton’ type role he had played so often was inspired. He plays it straight and is hilarious. Bruce Dern (my hero) is also outstanding as his dumb son. 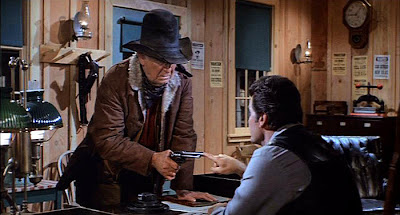 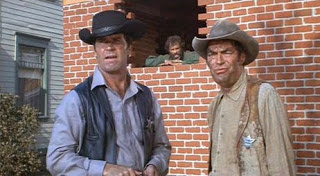 They haven't quite got their bars in yet
Best of all was the talent that Jack Elam discovered for comedy. He is great as the deputy. 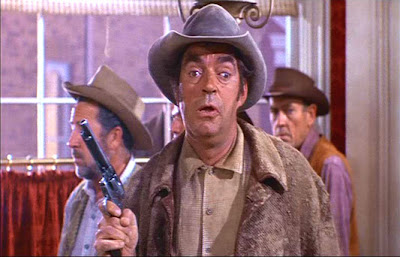 he plot is a take-off of High Noon, really, as the sheriff has to face down the bad guys without the support of the town that appointed him. Although I don’t recall that the citizens of Hadleyville hid in a whorehouse.


It’s all very silly, of course, but it is huge fun. Some of the comedy is on the low side (Elam says his former job was “to hold the horse at Madame Orr’s house”, with the inevitable spooneristic mangling) but it’s perfectly harmless. There is no irritating canned laughter, nor overly ‘comic’ music.


A sequel was inevitable, and enjoyed. Support Your Local Gunfighter reassembled most of the same cast. Sequels don’t always work and the joke can wear thin. This one, however, has a lot of the same pzazz and sense of fun.


It’s not quite as good as the previous one, maybe because Bowers didn’t write it: James Edward Grant, who did a lot of Wayne Westerns, though who had also collaborated on The Sheepman, was at the typewriter. It was wise of them not to make another, Support Your Local Outlaw or something, but it’s definitely worth seeing. You’ll chuckle.


Good old Marie Windsor is in it (as a saloon gal, natch) as well as John Dehner as a colonel. Chuck Connors is the real Swifty Morgan. 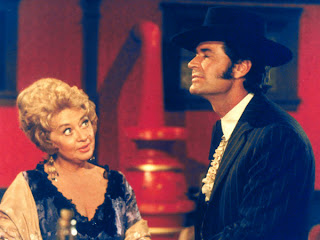 Class actors at work
Gunfighter is corny and slapstick and there are many jokes about people stealing burros and saying it’s your ass and so on (stolen from Young Billy Young, another Burt Kennedy film) but who cares? In fact the ass theme carries all through. The doc (Dub Taylor), who also acts as a veterinarian, says, “I doctor pack-mules, too. If you got a pain in the ass, you come see Doc Schultz”. That was witty and rather daring in 1971.


Garner is great again, this time in the old Along Came Jones plot of a man newly arrived in town mistaken for a crack gunfighter. He does his Maverick ‘cowardice is the better part of valor’ act. Jack Elam, comic star, is back as the scruffy incompetent posing as Swifty Morgan, gunman. Harry Morgan once again has a Calamity Jane style daughter (this time Suzanne Pleshette) and many of the other characters return too. 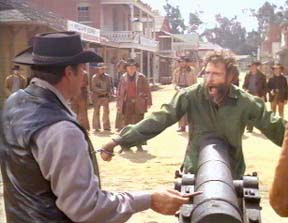 
You get the idea that the whole cast enjoyed making the movie and their fun transmits itself to the audience.


Once again Jack Elam has a closing monologue in which he tells us what happened to all the characters. As for himself, he tells us that he went on to become a big star in Italian Westerns. 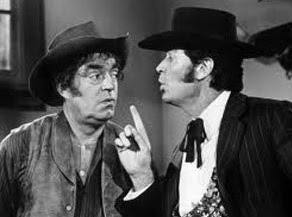 Two great comic actors
Some snooty critics, including Roger Ebert, panned both movies. It is true that they aren’t played straight like The Sheepman or The Rounders, which are funnier because they border on the serious. But the Support movies go for a different comedy, more obvious, less subtle but just as funny in a more upfront way. And they are respectful, affectionate spoofs, not cynical, mocking ones.


Oddly, Support Your Local Sheriff! had an exclamation point in the title (usually a sure sign of weakness in a movie) and its sequel didn’t. I might have to revise my theory, the well-known and much-discussed Arnold Ludicrous Exclamation Point Hypothesis (ALEPH).