Ride Him, Cowboy, aka The Hawk, was the first of the six Warners Westerns starring John Wayne that came out in the early 30s. Like the others it has a runtime of under an hour, is in black & white and features pretty corny dialogue but is noticeably better than the three dreadful clunkers he was forced into doing for Harry Cohn at Columbia. And he was the headline star again. The Warners contract must have seemed like a release. 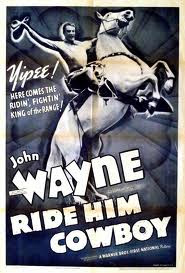 Love the 30s posters
This one tells how the wanderin’ Texan Wayne (who is called John Drury here) first meets up with the intelligent horse, Duke. Duke gets second billing. In this one, Duke saves Duke’s life because the equine Duke is put on trial in the first reel and the judge is just about to pass sentence when the two-legged Duke comes along and saves the nag. In every film the four-legged Duke does something clever (this time he unsaddles Drury’s mount so proficiently that we confidently expect him to saddle himself up as replacement). Small boys and teenage girls in the 1930s probably thought this was so cute. 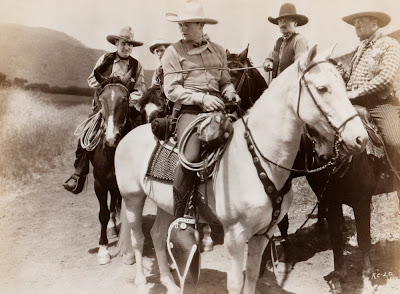 Duke on Duke
Thereafter, it’s a tale of a wicked masked bandit chief (Frank Hagney) known as The Hawk who is terrorizing the local ranchers. You’d need an IQ lower than the equine Duke’s not to guess who the masked villain is.


Duke, aided by Duke, foils the plot and gets the gal (Ruth Hall). 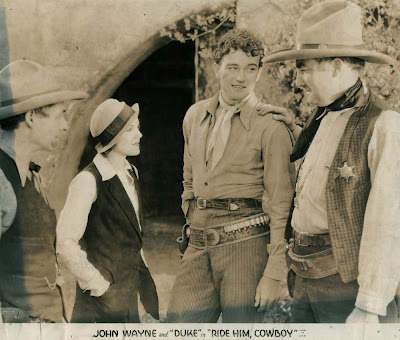 The heroines always had 1930s costumes. Odd.
In case you were wondering.


It’s set quite late for a Western as one character has stored his dress suit in an old newspaper and the headline of the paper is ‘Dewey Takes Manila’ (and that was 1898, as doubtless you know).


The comic relief this time is two-fold: a comically cowardly deputy (Harry Gribbon) and the sort of incompetent judge, Clarence ‘Necktie’ Jones (Otis Harlan), who would be drunken in any other time than in a Prohibition era B-movie but here is as sober as a, er, judge and uses an empty bottle as a gavel. 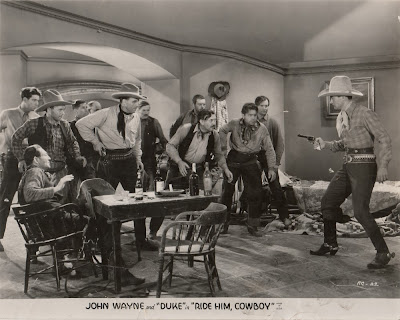 John holds off a whole saloonful of badmen
I don’t mean to be patronizing or dismissive. It’s perfectly decent for a 30s B-Western and, like all six of the series, it has energy and zip. It gallops along. It’s a high-budget A-picture compared with the Columbia dross he had just done.


And it’s interesting to see Wayne gradually growing into roles and slowly improving his acting skills.