The past is not another country. It’s this one.

Lone Star (the title has several meanings) is a very good movie but I’m not sure it’s a Western. It has quite a bit Western about it: we have a loner, a Texas sheriff seeking justice; we have a bad man with a Colt .45 on his hip; we have Texas locations. But really the movie is a murder mystery, a romance and a subtle psychological drama which comments on life in America today. 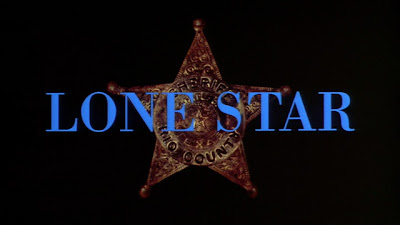 Sam Deeds (Chris Cooper, July Johnson from Lonesome Dove) is a youngish sheriff, son of a famed lawman (Matthew McConaughey), who investigates the 40-year-old murder of a predecessor, Sheriff Wade (Kris Kristofferson), whose body is turned up by accident on a disused firing range. The movie flits back and forth between Deeds’s time and Wade’s. Some characters are in common. It’s a complex plot and it’s one of those films that repays watching more than once. Cooper is very good as the sensitive, intelligent, compassionate protagonist, still living in the shadow his father so many years on. Everyone tells him incessantly what a great man his daddy was.


Kristofferson is formidable as the murderous, corrupt bully of a town boss. His part is short but his presence hovers over the whole town and whole movie. 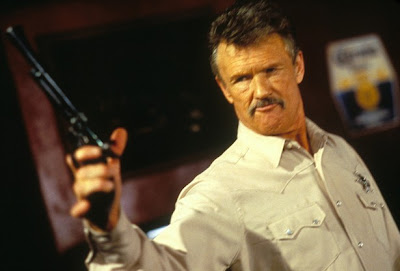 Other notable performances are by Ron Canada and Gabriel Casseus as the present-day and young Otis, the bar owner, and, especially, Clifton James as the old Mayor Hollis, formerly Wade’s deputy. Mercedes Cruz is extremely good as the successful restaurant owner Miriam Colon, mother of teacher Pilar, the girl Sheriff Deeds had been attracted to as a teenager and is now again (the relationship is shown in a wonderfully sensuous way). Mercedes so desperately wants to avoid such a match… As Pilar, Elizabeth Peña is determined, almost fierce, yet warm and loving. It’s an excellent performance. 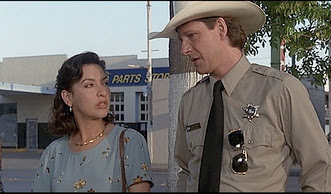 Gordon Tootoosis shines (as he always does) in a minor part as an Indian bric-a-brac seller. A minor part to underline how small is the role of Native Americans in the community.


This fine film shows us how the past can haunt the present and how we never really escape the sins of our fathers.


There is a slightly off-the-point sub plot about the Army which meanders rather and could usefully have been cut. I would also have dropped the episode with Frances McDormand as Deeds’s football-crazy "tightly-wound" ex-wife. But there are other sharp observations on Texas realities such as Mexican immigration, town politics, the clash of cultures and the teaching of history which are astute comments on the way we live now.

The music (Mason Daring) is very good. As is so often the case these days, it is fundamentally a series of carefully chosen songs.


Lone Star is a quiet, low-key, rather dark film, powerful and intense. It was directed, written and edited by John Sayles and the direction, writing and editing are of an equally high standard. The changes into and out of the present and past as characters simply step into them are brilliantly well handled.


The movie is not an essential part of the true Western fanatic’s collection but it’s most definitely worth a watch – actually, two.