The book and subsequent TV mini-series Lonesome Dove spawned a considerable number of prequels and sequels.


The first story in terms of the chronology of McMurtry’s heroes Woodrow Call and Gus McRae was Dead Man’s Walk, published in 1995 and made into a TV mini-series aired in 1996. 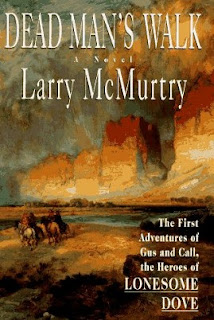 While the novel Dead Man’s Walk has little of the majestic sweep of Lonesome Dove, it is still an entertaining book, especially for Gus & Call fans who want to know about their youth. Lonesome Dove was essentially about two grizzled old men trying to recapture the old days of adventure, and towards the end describes the death of one of them. They were such larger-than-life characters that we inevitably want to know about those days of adventure of their youth, when they were Texas Rangers.


Mr. McMurtry starts us off on the banks of the Rio Grande with another strongly-drawn whore, this time the Great Western, the buxom Matilda Roberts, walking “naked as the air” from the river with a snapping turtle held by the tail. It is a memorable image. Of course in the TV version she is clothed in long underwear and throughout the film, as was the case with Lonesome Dove, language, nudity, violence (especially Indian torture) and sex are discreetly toned down for 'family viewing'. For this reason the books are earthier, saltier and more authentic too. Not that they are salacious. But they are more fun.


The two boys are on their first Rangers expedition, under a Major Chevallie (Chevallier in the movie), mapping a stage route to El Paso through Comanche country. Early on, Gus and Call come up against the feared Indian chief Buffalo Hump. McMurtry has a way with fearsome Indians. Blue Duck in Dove was pretty ferocious and here, Buffalo Hump, the horse- and child-stealer Kicking Wolf and, to a slightly lesser extent in terms of character and fear factor, the Apache Gomez are real malevolent presences. It is really Buffalo Hump who dominates and we get a real sense of the sheer power and ferocity of the Comanche. The Rangers, even the experienced ones, are completely outclassed.


On returning to Austin, Gus just has time to fall for the storekeeper’s daughter Clara Forsythe before the boys sign on for another, bigger enterprise: they are to march to Santa Fe, New Mexico, and take it from the Mexicans. Commanded by sea-pirate turned colonel Caleb Cobb, with a drunken General Phil Lloyd in tow as ballast, the rag-tag army sets off to pick up all the gold and silver they believe is lining the New Mexican streets.


McMurtry describes the sheer incompetence and amateurishness of these semi-military expeditions. Half a dozen Indians, and later a ragged army of Mexican boys make mincemeat of them. In no time at all they are afoot, starving and lost.


The real Santa Fe Expedition of 1841, a dismal flop, set out to claim the New Mexican capital for the Republic of Texas. It was an unofficial attempt (privately backed by Texas President Lamar) to gain control over the lucrative Santa Fe Trail. The merchants and businessmen were accompanied by a military escort of some 320 men led by Hugh McCleod which included a company of artillery. It was poorly prepared and provisioned and did indeed get lost. An advance guard finally arrived in New Mexico in mid-September 1841 where they were captured and forced to walk 2000 miles to Mexico City. They were held there until diplomatic efforts secured their release the following year. The whole affair increased tensions between Texas and Mexico and contributed to the Mexican-American War of 1846 – 48.


So McMurtry’s story is at best loosely based on the expedition. But as I have often said before in this blog, since when were Westerns supposed to give us historical fact? You want history? Read a history book.


The characters are very strong and were also very well cast in the TV version. Jonny Lee Miller, 23, in his only Western so far, makes an excellent Call, already showing those strong character traits of taciturnity, suppressed violence and almost autistic inability to relate to others, especially women. David Arquette, 24, a rather weak Jack McCall the previous year in Wild Bill, makes a very good young Augustus McRae, a gabby, squeamish, philanderer. They both have excellent accents (they set off for Santa Fy) and both have that slightly gangly, inexperienced naïvety of youth – though they learn fast. If you squint a bit, I guess they do look a little bit like a young Tommy Lee Jones and Robert Duvall. 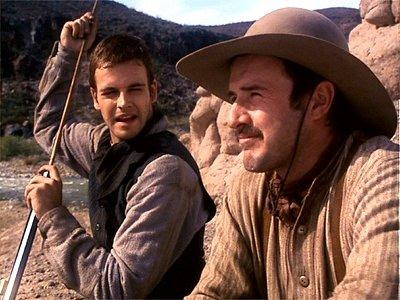 Miller and Arquette make very good Call and McRae
Their Ranger friends are distinct, recognizable characters in the book and on TV the actors chosen do an excellent job. They are led by Keith Carradine as Bigfoot Wallace and Harry Dean Stanton as Shadrach. With their long muskets, buckskins and in Shadrach’s case coonskin cap they are hardened scouts, more like mountain men or trappers than Texas Rangers as we imagine them. 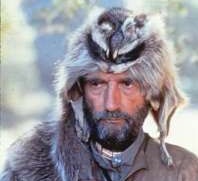 Stanton excellent as Shadrach
Ray McKinnon (unforgettable as the parson on Deadwood) is excellent as Long Bill Coleman and I loved Tim Blake Nelson as Bill’s one-eyed pard Johnny Carthage. In his brief part there is Julius Tennon, the brutal killer from Lonesome Dove, as Sam the cook.
As for the leaders, F Murray Abraham is Col. Cobb, with a parrot, Beelzebub, on his shoulder (Beelzebub was invented for the TV show but is a happy creation) and the first-class Brian Dennehy, the corrupt sheriff from Silverado, is Major Chevallie in the early part of the tale. Actually, though Abrahams was good, being a bit of a Dennehy fan, I did rather wish that their roles were reversed and Dennehy had led the Santa Fe expedition. 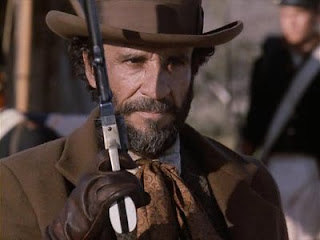 F Murray Abraham as Cobb, parrotless
The commanders are incompetent and murderous fools. When the pathetic and much-reduced group has finally crossed the Jornada del Muerto which give the story its name, they are handed over as captives to the loathsome Major Laroche, a Frenchman in the Mexican army, who organizes a particularly nasty and sadistic ‘ceremony’ for the prisoners. The only exception to these gutter officers is the stern but noble Captain Salazar, the Mexican soldier who leads them in the ‘dead man’s walk’, very well played by Edward James Olmos in the film. 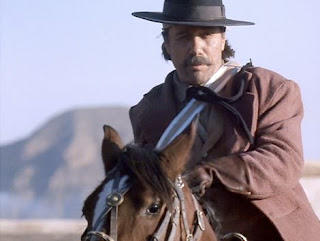 Edward James Olmos as the stern but sympathetic Capt. Salazar
As for the women, Mattie is a wonderful creation (don’t get me wrong if I say that McMurtry specializes in whores and Indians) and Patricia Childress does her justice on TV. The film invents a little more of a backstory for her and her relationship with Shad. Playing a young Anjelica Huston was a big ask but Jennifer Garner does an excellent job as Clara. She is sassy, forward, bold and full of spirit. I don’t know who played the veiled Lady Carey or her maid Emerald but they were good too. (Lady Carey sings an aria from Nabucco that Giuseppe Verdi had taught her in Milan in 1839; actually, though, Larry, the first performance of Nabucco wasn’t till March 1842. What, picky, moi?)  Unlike the book, the TV film gives more limelight to Call’s (semi-)relationship with the whore Maggie and ends with that. 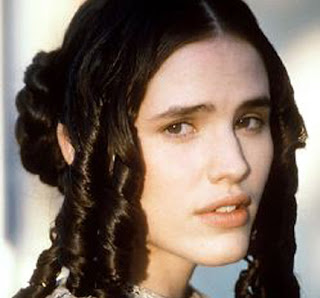 Jennifer Garner as Clara
Eric Schweig is always outstanding. Think of his seriously creepy Indian in The Missing. Here he manages to play a humpless hunchback with convincing aplomb. He is great and captures superbly the pure hatred and essential violence of McMurtry’s character. 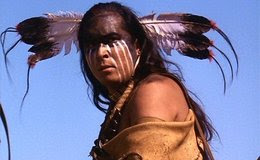 Schweig: superb as Buffalo Hump
Many of the elements of Lonesome Dove are carefully inserted, as if to telegraph them (though of course they were written afterwards) such as Gus’s loud voice and his keen eyesight, and Call says, as he did after another explosion of violence in Miles City, that he “won’t tolerate rude behavior”.


Both novel and TV movie are very good and I recommend them. Best is to read the book then watch the film right after.