It seems paradoxical that the really big, long Westerns these days are made for the small screen while movie theater ones have become smaller and more intimate. Compare the 2006 Westerns, Broken Trail or indeed Deadwood, both TV shows, with the movie Seraphim Falls. The made-for-TV mini-series have the budget and can tell (in episodes) long tales with complex plots and many characters.


Some of the made-for-TV ones are so good that they deserve to be seen on the big screen. Broken Trail is one. Superbly directed by Walter Hill and written by first-timer Alan Geoffrion, a real cowboy and a neighbor of Robert Duvall’s, the story is convincing, real, moving and gripping.


With production design by Ken Rempel and wonderfully authentic costumes by Wendy Partridge, the movie looks entirely right. It was filmed beautifully in Alberta by Lloyd Ahern, Hill’s preferred cinematographer. We are treated to huge panoramic landscapes and shots of swirling mustangs. What a pity we watch it on television! Still, there are some good big TVs these days.

Beautiful shots of the horses


The music, by Van Dyke Parks (who had also done Wild Bill for Hill) and David Mansfield is moody, atmospheric and occasionally fun.


Prentice Ritter (Robert Duvall, who plays the part as if Gus McCrae had survived to the late 1890s) seeks out his nephew Tom Harte (Thomas Haden Church) on a ranch in Oregon and explains that the fellow’s mother, Duvall’s sister, has died but left him nothing. Duvall proposes driving mustangs to Wyoming to sell to an agent for the British Empire and dividing the proceeds, so the movie describes a long drive in which elderly but still tough Duvall accompanies the younger man across the plains. 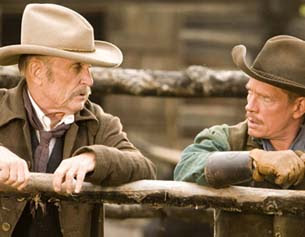 
Comparisons with Lonesome Dove and Open Range are inevitable, and in fact Duvall has said that he regards the pictures as a trilogy. What makes this one different is the unusual introduction of the adoption by the horse drovers of a wagonload of Mandarin-speaking Chinese girls who have been bought, like livestock, as prostitute-slaves by the odious Captain Billy Fender (James Russo, from Open Range). The men rescue the girls who end up accompanying them all the way to Wyoming. A cowboy film about prostitutes; it’s a sort of whores-opera.

Considering the hugely important part that Japanese and Chinese Americans played in the country's nineteenth-century history, there have been very few cinematic treatments. Kung Fu on TV 1972 - 75  was, I suppose, an exception, though it hardly dealt with similar themes and it had a non-Chinese actor as lead. James Clavell's Walk Like a Dragon in 1960 was a worthy contribution but such films have been very rare. 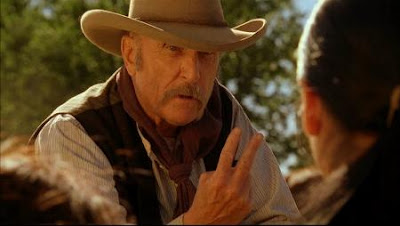 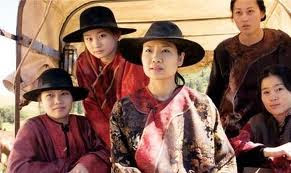 Women treated as livestock
It is a true Western in the sense that people faced with hardship, violence and injustice on the wild frontier are obliged to cope, and in doing so prove their mettle. And it is a Western that shows that the West was not only populated by white males with the occasional Indian. It was an enormously rich ethnic mix.


Greta Scacchi is tragically excellent as an abused women driven to sell herself. 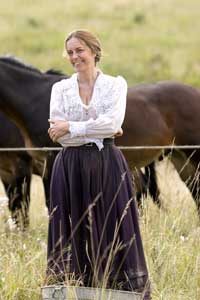 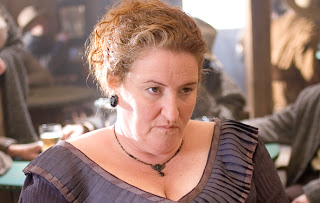 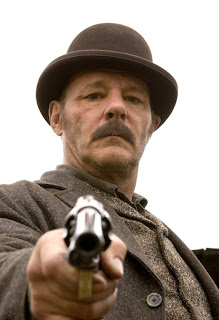 Big-Rump Kate and Big-Ears Byers, terrific bad guys
In fact that’s another merit of Broken Trail: it is superbly well cast. Hill tells us in an interview that Sam Peckinpah used to say that the success of a movie is 70% casting.


A terrific Western with all the ingredients. A must-see.