From one point of view, The Wonderful Country is a slow-paced Western with too little action. And certainly if you are expecting another Robert Mitchum gringo-in-Mexico picture with revolutions and machine-guns you are going to be disappointed.


However, on reflection the film is an intelligent, subtle, introspective story about a man in search of himself. On these terms, it is excellent. 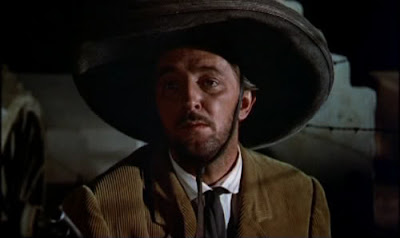 One of his greatest performances
How Mitchum loved Mexico! This was already the fourth time he had worked there. Author of the novel The Wonderful Country Tom Lea (writer and artist Thomas Calloway Lea, III) and director Robert Parrish, who set up the project, had first wanted Henry Fonda and then Gregory Peck for the part, and only went to Mitchum when they turned it down. But Mitchum was perfect for it. He spoke passable Spanish (though they took the slightly odd decision to have him speak English with a Mexican accent in the Mexican scenes, and straight American when he was in Texas). Mitchum genuinely liked Mexico and felt comfortable there. He always thought of himself as a renegade adventurer. He was just right for the part of Martin Brady, an American who fled across the Rio Grande when young and became a Mexican, but who would always be regarded as a gringo there and a Mexican when in the States. It was one of Mitch’s greatest performances. 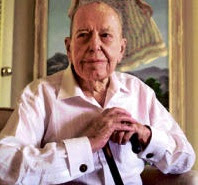 Director Parrish
It was also probably Parrish’s best film. He had not worked much on Westerns previously. He had done an 1850s San Francisco tale, The San Francisco Story, with Joel McCrea; the excellent modern rodeo picture The Lusty Men (also with Mitchum, outstandingly good), which he did, uncredited, with Nicholas Ray; and Saddle the Wind, a Robert Taylor Western which I think rather enjoyable (though John Sturges apparently directed some scenes uncredited). 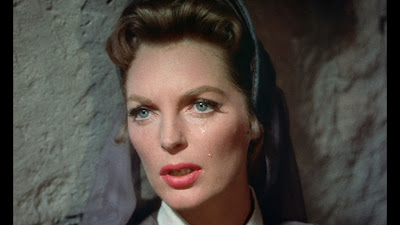 Julie London. Looks like a nun. But she ain't.
The last-named also starred Julie London. We often think of Ms. London as a jazz or pop singer and indeed, that was really where her fame lay, but before that, in the early and mid-1950s, she acted in quite a few pictures. Between Saddle the Wind and The Wonderful Country she had been rather good in Man of the West with Gary Cooper. She turned up on the set in Mexico with her boyfriend, Route 66 writer Bobby Troup, whom she later married and who took her away from movies into music.


Lea says “Mitchum had a very sharp lawyer” and took over the picture (Mitchum was executive producer) but adds, “But I got to like Mitchum”. Lea wrote the screenplay close to the novel but it was revised (by Robert Ardrey and Walter Bernstein) to give a bigger part to Julie London, among other changes. 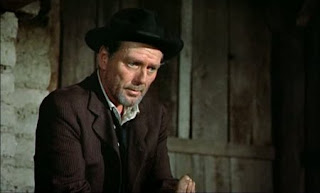 
Some friends of Mitchum’s were cast. Mitch offered his pal Anthony Caruso any role and he chose to play the Mexican farmer Santiago. Rowdy Charles McGraw (Blood on the Moon, Saddle the Wind) had a good part (and did it well) as the doctor who treats the hero in Texas when he falls from his horse and breaks his leg. Jack Oakie is a railroad man. 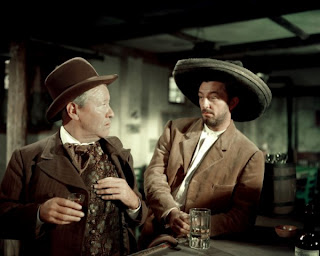 Railroad man Jack Oakie
Albert Dekker (the marshal the year before in These Thousand Hills and later to be Pat Harrigan in The Wild Bunch) is rather good as a sympathetic captain of Texas Rangers in a frock coat. 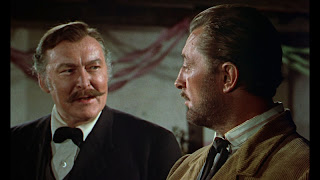 Captain of Texas Rangers Albert Dekker
‘Bad Chuck’ Roberson was stunt double and coordinator, and, as he often did, acted a minor character (Barton). Writer Lea appears too, as the barber. Probably the strongest minor character was that of the black Sergeant Tobe Sutton, a part which a judge released baseball star Leroy ‘Satchel’ Paige from a Florida prison to play. He turned up on the set with a young girl. “She’s my daughter’s babysitter.” Mitchum said, “But your daughter’s not here.” Paige replied, “How about that?” 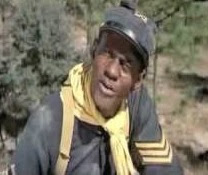 Satchel Paige
Durango in those days was still a pretty wild town. One night when Roberson and Mitchum were in a bar, two Mexican men got into an argument and one shot the other in the head. He died at the Americans’ feet.


The picture suffered at the editing stage and it causes some oddities. For one thing, Brady and Helen (Mitchum and London) never really get close while he is in Texas and yet the whole picture really depends on the fact that they are in love. But Mitchum never watched his own films and once shooting had finished, lost interest.


The Wonderful Country is an interesting movie. It has some action but is not really a shoot-‘em-up Mexican Western. It’s quiet, deliberately steadily paced and really rather sad.