One of the better offerings of the mid-1960s, The Professionals was well directed by Richard Brooks (he was nominated for an Oscar for it) and excellently acted by the principals: Lee Marvin as the tough, steely boss, all military know-how, marksmanship and gritty determination; Burt Lancaster as the smiling-roguish explosives expert (he had to be smiling-roguish); Woody Strode as the tracker and stealth man, skilled with the deadly bow and arrow; and Robert Ryan as the mild (though of course tough underneath) horse-loving wrangler. It’s a great line up and Ralph Bellamy as the ruthless railroad magnate who hires them to rescue his wife from Mexican bandido Jesus Raza, and Jack Palance as said macho bandido, add to the strength of the cast.


Claudia Cardinale as the kidnapped wife is OK in the early scenes, when she doesn’t have to say much but is the weakest link once her dialogue starts. Still, it must have been hard to act in a second language with the accent of a third. Marie Gomez as the amorous soldatera Chiquita, however, is splendid. 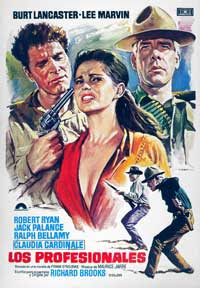 Richard Brooks, the Elmer Gantry and Cat on a Hot Tin Roof man, only directed three Westerns and to judge by the quality of the oaters he did, that was a pity because they were all rather good. His first was The Last Hunt, with Robert Taylor and Stewart Granger both very strong, then came The Professionals, and lastly, in 1975, the underrated Bite the Bullet, a 1906 horse race saga.


The Professionals is a 1917 caper movie and an adventure yarn, and is full of action. There are explosions and shooting galore. The screenplay (Brooks from a Frank O’Rourke novel) contains some terrific lines, especially the last one, although it also contains some rather pretentious pontificating on the meaning of life and so forth.

I guess its reputation has suffered from the fact that three years later Sam Peckinpah made the definitive American-mercenaries-in-Mexico film. The Wild Bunch did rather put The Professionals in the shade. Still, the earlier movie has merit. I wonder if Peckinpah had seen it? Probably. The Professionals also has some similarity to the fine Garden of Evil (Fox, 1954), with Gary Cooper leading the band of Yanks below the Rio Grande. 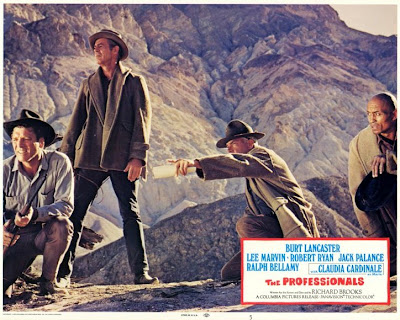 It does suffer from the rather unpleasant notion that it's alright to shoot down or blow up Mexicans in large numbers because they have droopy mustaches and don't shave and they are, well, foreign.


The movie is visually attractive, photographed by Conrad Hall at Lake Mead and the Valley of Fire State Park in Nevada and in Death Valley, Cal., and we sense the ordeal of the journey and the heartless barrenness of the terrain.

Unfortunately, as with many films about Americans going down to Mexico, they all troop from right to left across the screen as they go down there and from left to right as they ride back, which is a bit crude. 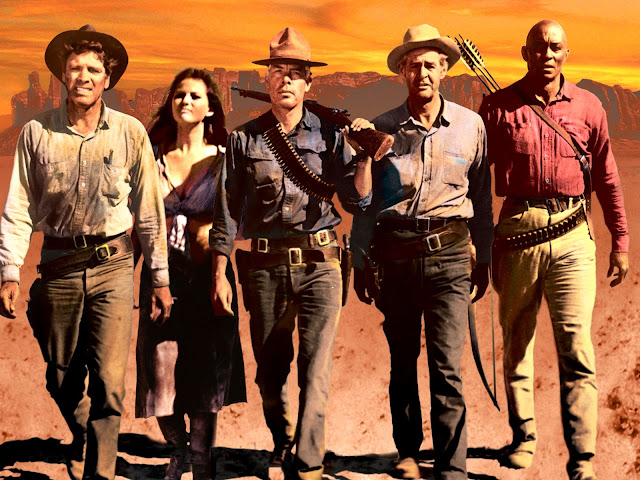 Stunts are quite impressive (Cardinale’s stunt double was injured in the scene of the exploding canyon) as befits an action movie such as this. The music by Maurice Jarre is suitably stirring. You get the impression throughout that all the cast and crew were indeed professionals.


All in all it’s a racy 1960s actioner with good plot twists and some amusing lines. There’s an element of modern cynicism but the Western heroes still respect the basic code of honor and they do what a man’s gotta do. Worth a DVD purchase or, even better, a visit to the movie theater if it ever comes on in some film festival.