Apart from a celebrity appearance in 1940 along with Gene Autry, Roy Rogers and several others in Rodeo Dough, The Miracle Rider, a Mascot serial of 1935, was Tom Mix ’s last appearance on the silver screen as a Western star. The whole 15-episode serial is now available on a DVD. It is huge fun.

Tom Mix was, of course, the silent Western hero par excellence. He never quite made the transition to talkies. For one thing, he had broken his teeth in an endless series of stunting and action escapades over two decades and he was conscious that he didn’t handle dialogue too well with his false ones, which clicked. By 1935 he was no longer fashionable in Westerns and was doing something he loved just as much if not more, touring with his Wild West circus. But despite the millions and millions of dollars that had poured like running water into and out of his bank accounts, he was hard up for cash and he decided to make one last Hollywood effort. He was 55 years old but he kept himself in fighting trim, even if his hair and eyebrows are suspiciously black. Luckily, and probably deliberately, he says very little in this actioner, although his voice is deep and rich and he handles lines no worse than the others, it must be said. (The dialogue is pretty corny). 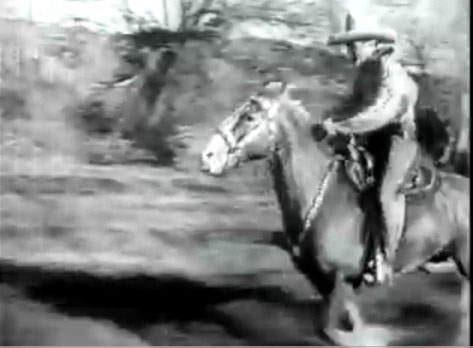 Classic
The first (50 minute-long) episode treats us to a potted history of the American West, featuring Daniel Boone, Davy Crockett and Buffalo Bill. It is interesting that the advance of what others might have called civilization is shown as the spreading of a black stain on the map as “Indian Territory” is reduced to a pitiful pocket handkerchief. This Western is notably pro-Indian and the bad guys are white men in suits. The action starts in 1935 as Tom ‘Morgan’, Captain of Texas Rangers and friend of the Ravenhead Indians, sets out to foil a heinous plot by an unscrupulous oil magnate to deprive the Ravenheads of their land. Tom recovers money stolen from the Indians, and Chief Black Wing (Bob Fraser) makes him a Ravenhead chief, giving him the name "The Miracle Rider”. 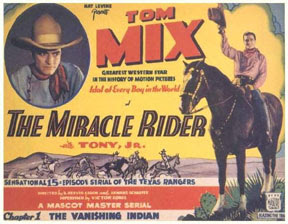 "Idol of every boy in the world," says the poster.
No prizes for guessing who the serial is aimed at.
In the episodes that follow, every kind of skullduggery takes place. Saturday morning Western serials of this kind, which were pitched at (sorry, girls) bloodthirsty boys, were fond of gadgets and had no scruples about period authenticity. As a result, the baddies have secret telephones and radio transmitters, they use a remote-controlled rocket-glider to frighten the Indians off their land, and motor cars (some of them really cool) play a significant part. The chief heavy is Zaroff (Charles Middleton, the Emperor Ming the Merciless from Flash Gordon), and he wants the Indian land in order to mine X94, a new high explosive that will make him, as he repeats in each episode, the most powerful man in the world. 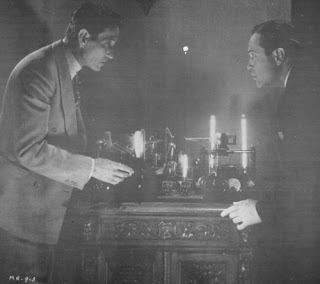 
B Reeves Eason shot all the outdoor action and stunt scenes while Armand Schaefer did all the dialogue.


Yakima Canutt is there (uncredited). Tom was getting past the age where he could do all his own stunts. Chief John Big Tree and Iron Eyes Cody are also present. One of my favorites, Earl Dwire, is an Indian scout. 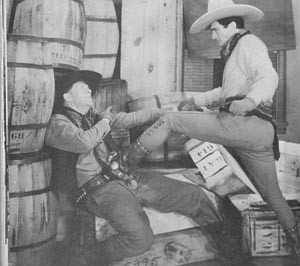 That spur must have hurt...
Tony Jr. saves the day in most episodes (once blowing a car horn to distract the baddies). Tom makes out with the daughter of the Indian chief at the end (who was to have been played by Tom’s daughter Ruth Mix but in the end the part went to Joan Gale, who, however, is called Ruth) but only with a chaste handshake. 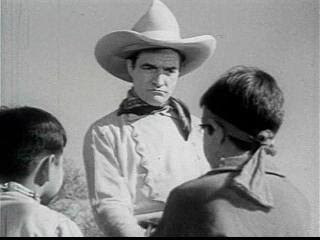 Three people for the audience to identify with
The serial did very well, grossing over a million dollars. Sadly in some ways, it has become the Western Tom Mix is most remembered for these days, I suppose because it’s a talkie, because it’s available and because it’s the most recent. It’s not pure Mix: to appreciate Tom in all his glory you need to look at a great feature-length silent like Sky High (1922) or Riders of the Purple Sage (1925).


Still, The Miracle Rider is good stuff and most definitely worth a look, fans!