Another in the long series of Audie Murphy B-Westerns for Universal was Ride a Crooked Trail. It was again directed by Jesse Hibbs and although not quite of the quality of Ride Clear of Diablo, was still fun. 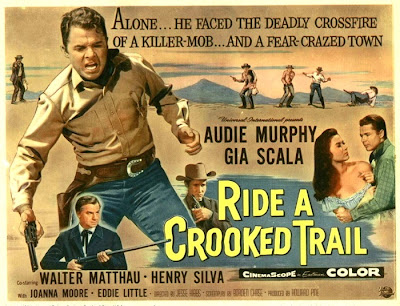 I didn't actually spot the fear-crazed town
It’s the old one about a badman being mistaken for a marshal and gradually coming round to the path of truth and light by doing the job.

It’s also the one about how he bonds with a ‘bad’ woman and a little kid and they end up forming a family. You know, Hondo, Yuma, The Tin Star, The Last Wagon, many more. Three of society’s outcasts (robber, moll, orphan) together find happiness and respectability.


The script is by Borden Chase, so quite literate, although he did do some plodders, it must be said. Hibbs knew his stuff so we have pace, action, and a certain amount of character development.


The film is made by the performance of Walter Matthau as the eccentric Judge Kyle. Kyle is almost Judge Roy Beanish with his quirky rulings and quickness to resort to firearms and the bottle. Matthau only did four Westerns. It was a pity; he was rather good in them. In 1955 he was the beastly whip-cracking villain in The Kentuckian with Burt Lancaster and he was the scumbag in The Indian Fighter with Kirk Douglas. And later of course he was superb as the sheriff in that fine film Lonely Are the Brave, also with Douglas. Here he is as lugubrious as you would expect (lugubrious having been put into Webster’s expressly to describe Matthau) and adds color and memorability.

Judge with a shotgun
The heavy is Henry Silva. He’d already been the opponent of Randolph Scott (The Tall T), Robert Taylor (The Law and Jake Wade) and Gregory Peck (The Bravados) so it was time for him to come up against Audie. He’s OK. No complaints.

Silva as heavy
The excellent Leo Gordon has a very short part as the trail boss, not a heavy. He only appears long enough for you to say Oh, Leo Gordon, then he’s gone.
Another excellent but uncredited bit-part player is Paddlefeet, the mutt. 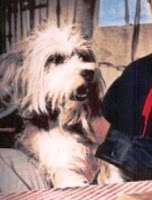 
Gia Scala as Audie’s girl is absolutely ravishing. It was her only Western. What a tragedy. She was actually born in Liverpool, England but is about as far from a Scouse as you can get. She moved with her Irish mother and aristocratic Italian father to Sicily and then to New York, where a Universal agent spotted her. She has great beauty, a delicious accent and a sparkle in her eye. Actually, Audie is quite saucy with her, for Audie. But who can blame him? 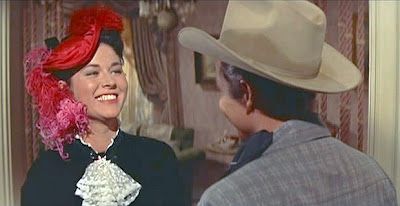 Audie being saucy with the gorgeous Gia
Well, it’s no epic of the genre. But Ride a Crooked Trail is a fun actioner which I enjoyed.