Bob Mitchum gets to lead in Westerns

After serving his time as heavy in Hopalong Cassidy movies in the early 1940s, Robert Mitchum finally made it to star in his own Westerns when RKO’s reliable Tim Holt was drafted. In 1944 Mitch led for the first time in the solid Nevada and the following year reprised the role in the livelier West of the Pecos. Both are available on the same DVD. 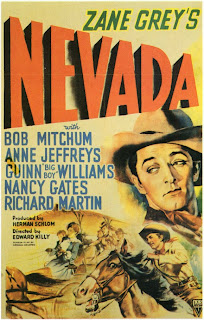 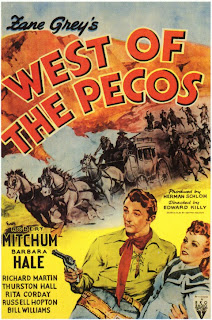 It was very much the Hoppy formula. Like William Boyd, Jim Lacy (Mitchum), nicknamed Nevada, rides with two sidekicks, a ‘character’ and a juvenile, though as Mitch was only 27, we had better say even more juvenile… Guinn ‘Big Boy’ Williams (a round 100 Westerns, from Jubilo in 1919 to The Comancheros in 1961) provides the ornery wisecracking pard as Dusty, while Richard Martin (37 Westerns, all Bs) is winning as the amorous Mexican-Irish guitarist singer Rafferty. Mitch is tall and handsome and has learned to ride surprisingly well. since his disastrous equine debut on Border Patrol.


A remake of the 1927 silent starring a pre-Virginian Gary Cooper  and a 1935 Buster Crabbe programmer, it’s a Comstock Lode yarn, supposedly a filming of the Zane Grey tale but a very liberal interpretation of it (screenplay by Hopalong hack Norman Houston). It follows the standard formula: young, brave hero (Mitchum), slimy baddie in a suit (Craig Reynolds) who has a thug-heavy (Harry Woods), two girls for the hero to dally with – the innocent, sweet one (Nancy Gates) and the more worldly saloon gal (second-billed Anne Jeffreys) – and a plot about assaying the pesky blue mud the miners hate, to find it is nearly pure silver. 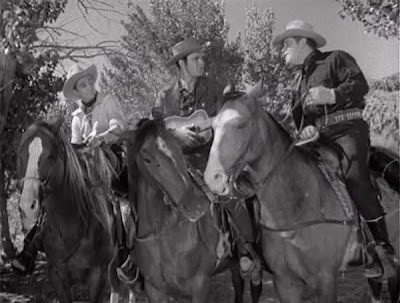 The three amigos, Mitchum, Martin, Williams
The story suffers from a coincidence too great to be credible, when the hero has $7000 in yellowbacks on him, won at dice, which is exactly the same amount and specie as was stolen from the shot man whose body he is found leaning over…


The Harry J Wild cinematography of the Lone Pine locations is rather classy and there’s some Paul Sawtell music, so it’s no zero-budget clunker by any means.


The pace of the movie is helped by not getting bogged down with love-making. Nevada is too busy solving the crime and rootin’-shootin’ to waste time romancing the girls. Doubtless that aspect appealed to the audience, 99% male, 66.6% of whom were boys. The 33.3%, their dads, probably enjoyed Anne Jeffreys’s very 1940s-sounding saloon song. And legs. 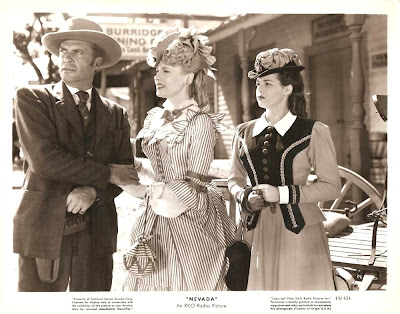 Dress heavy Reynolds, female lead Jeffreys, ingénue Gates
La Jeffreys has a pompous and grandiloquent closing speech which should have been cut.


The picture was directed by experienced Edward Killy, usually referred to as a “feisty little Irishman”, who knew his business. The movie is workmanlike and sound. It’s a fairly routine one-hour B programmer with few pretensions and it’s standard RKO fare (not to say fodder) but it marked the rise to Western stardom of Robert Mitchum and so it has its place in the history of the Western movie - ah, that noble subject.


Almost immediately, it was back to the scorching, alkali desert locations to film a sequel, West of the Pecos. The crew was much as before, with Ed Killy directing a Norman Houston-penned script from a Zane Grey novel. This too had been a silent (1922) and a talkie (1934). Harry Wild was back behind the camera and Sawtell again jotting down the crotchets. In front of the camera, Bob Mitchum was now Pecos Smith and Richard Martin’s $75-a-week contract had been renewed so that he could return with his guitar as Chito Rafferty. No Big Boy Williams though. He was singing a song in Texas for Columbia. 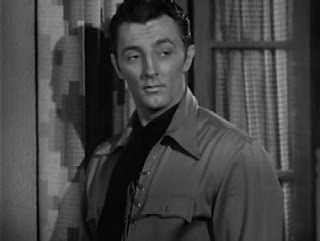 More hip
This story is a revenge tale as Pecos vows to a dying pal that he will kill the guy who shot him (Harry Woods, also the heavy in Nevada). He duly does, then gets away with the help of a cross-dressing Barbara Hale (in only her second Western; she went on to be the love interest in various, including Seminole with Rock Hudson and 7th Cavalry with Randolph Scott) , who has decided that West of the Pecos it’s safer to be male than a winsome maid. As they go off together, this, of course, gives rise to all sorts of hilarious ‘situations’ but we have to say that it’s all rather sub-Twelfth Night. 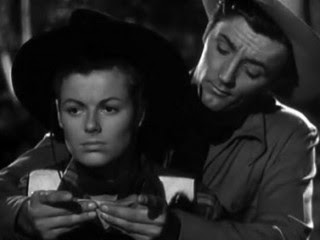 The style of Nevada was a rather straight B-Western one but Pecos is essentially comic in tone and Mitchum seems more confident and laid back. He’d moved on from Hopalong to be rather hip along the trail. There’s less classic cowboy action in this picture and more concentration on the romance. 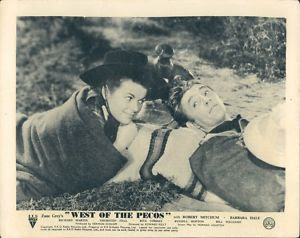 RKO were pleased with both films and wanted Mitchum to continue as lead in B-Westerns but he got into a fight with some policemen and was given the choice of enlisting or jail - he took the Army and so he was not to be the new Tim Holt after all. He did Story of GI Joe and became a big star. Westernwise, he graduated to Warners’ Pursued in 1947, an excellent Raoul Walsh-directed noir, then in 1948 the interesting Rachel and the Stranger and the fine Blood on the Moon. As for the B-Western series, Tim Holt came back from the war and resumed range-riding. Chito Rafferty sidekicked him just as happily.


Still, you could do a lot worse than these two RKO programmers. They do have a certain quality.