A classic gambler-gunfighter of the old West


We have made several references in this blog to Luke Short the writer of Western stories. That ‘Luke Short’ was the pen name of Frederick D Glidden (1908 – 1975). Let’s look today at the life of the other Luke Short (1854 – 1893), the gambler, whose name Glidden decided to take as a nom de plume. 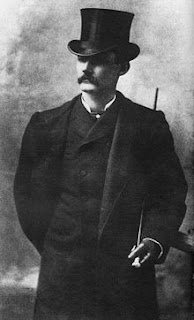 Luke the dandy
I have just read Luke Short: A Biography of One of the Old West’s Most Colorful Gamblers and Gunfighters by Wayne Short (Luke’s great-nephew), Devil’s Thumb Press, Tombstone AZ, 1996.

Biography by Luke's great-nephew
Let’s get the negatives out of the way first:


It is very poorly written. Mr. Short seems to have only the vaguest grasp of punctuation – commas seem to be inserted almost at random – and there are misspellings, poor grammar and basic confusions between words (capitol/capital, complement/compliment, it’s/its, etc). I try not to be too picky about this kind of thing and I am confident that comma-hawks will find errors in the writing of this blog from time to time but the solecisms and mistakes appear in Luke Short almost every other page and make reading a rather irritating affair. Devil’s Thumb Press (not a publisher with which I am familiar) doesn’t seem to run to an editor.


Secondly, Luke Short the gambler was a very private man. He wrote no autobiography and kept no diary. There are a few press reports, some family oral history and there are occasional mentions by those who knew him, for example Bat Masterson, but really there is precious little to go on. So the author is driven to invent, imagine and put words into his hero’s mouth or even thoughts into his mind. Up to a point this is acceptable but only up to a point. We get the feeling that the author has projected his own feelings, for example Luke’s pretended distaste for slaughtering buffalo, onto his subject. If Luke did indeed dislike the slaughter we should be told what evidence there is for that. Otherwise we just discount it as fabrication. Furthermore, there is much padding. For example, where a paragraph or even just a sentence on Custer would be sufficient to put Luke’s life on the Plains into context, we have a whole chapter (Chapter 8) on the general and Little Bighorn, events which Luke took no part in at all.


Right, so much for the tiresome bits. For the rest, we do end up with information on the very interesting life of Luke Short the gambler.


Born in 1854, Luke grew up in the tough environment of a Texas farm before the Comanche and Kiowa had been dominated, in tender years loading rifles for his mother to beat off attacks, and then shooting them himself. After stabbing the son of his school’s headmaster and fearing to have killed him (though he did not), as a teenager Luke joined an early post-War cattle drive to Kansas as wrangler and drover. Such was his education. 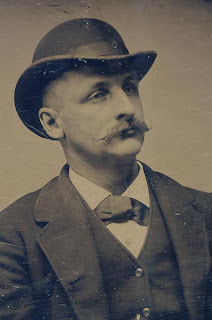 This might be Luke Short but is of doubtful provenance


Luke seems to have been determined throughout his life to earn enough money to be secure, even wealthy (an ambition he achieved) and was not too scrupulous about how to go about it – not that we should impose our 21st Century moral strictures on 1870s frontier life. He joined the ranks of the buffalo hunters who killed those beasts to such an extent that the herds were driven into extinction. He became a US Army dispatch rider up on the plains (a very dangerous occupation) and, with a partner we know only as ‘T.J.’, he sold alcohol to the Indians in great quantities. But most of all he gambled.


Luke evidently had a talent for cards and considerable skill. We see him run the gambling concession at the Long Branch in Dodge City, where he became friends with Bat Masterson, Wyatt Earp and many other notable figures of the day. He ran the gambling or ‘bucked the tiger’ (played as a freelance against the house) wherever money was to be made, in Cheyenne, Deadwood, Denver and Leadville, among other places, and was invited by Earp to work at the Oriental in Tombstone along with Bat, which he did. He finally settled in Fort Worth, Texas and ran the exclusive White Elephant there. 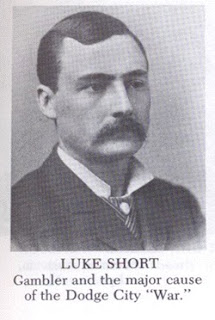 Rather smart
Luke obviously inspired friendship and loyalty, as was proved when Masterson, Earp and several others came to his aid during the 'Dodge City War' in 1883, when rival interests tried to run Luke out of town. 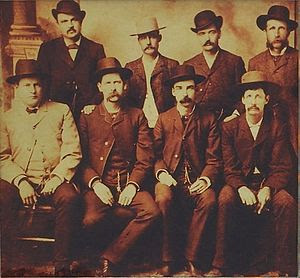 The so-called Dodge City Peace Commission, 1883.
Luke is in the back row, second from the left.
Luke’s reputation as a gunfighter (which we are told he detested) arose from these activities. He shot and killed five Sioux Indians when he was riding dispatch and killed two other men who tried to take over his illegal whiskey operation. He shot and killed professional gambler Charlie Storms in Tombstone in February 1881. 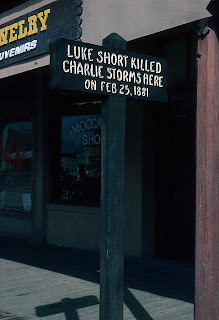 Marker in Tombstone
And of course he fought a duel in Fort Worth, shooting to death Longhaired Jim Courtright, an ex-lawman who was trying to shake Luke down with a protection racket. There may have been others. 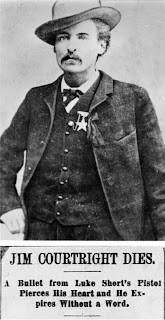 Longhaired Jim Courtright
Luke had a special Colt .45 made, with a drastically cut-down barrel and a gold foresight, and had his suits especially cut so that the pistol would fit, hidden, in a hip pocket and be covered by a longer vest than usual. Clearly, though, Luke was not the kind of Main Street-showdown gunfighter of Western legend. He was driven to defend himself on several occasions and was ready to use lethal force to do it. 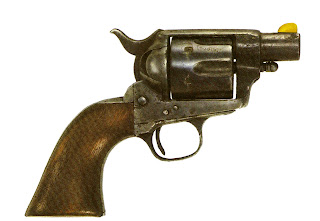 What Luke's cut-down Colt may have looked like
Luke was evidently a dandy and dressed with meticulous care and elegance. But little else is known about him for sure. He had a reputation as a ladies’ man but none of the specific ladies are known. We can say precious little even about his wife: only that she shared his mother’s name, Hettie. On the website Sweethearts of the West Ashley Kath-Bilsky says she was named Hettie Beatrice Buck Short and there is a picture of her: 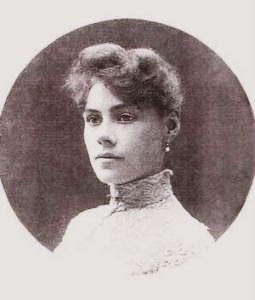 Very pretty
Gambling was eventually closed down in Fort Worth as it had been in other Western towns and Luke was driven into retirement. It is extraordinary, really, that after such a very full and eventful life he was still only in his thirties. However, he developed a kidney disease and died at the age of 39.


There is a biography of Luke Short by Bob Wood which I haven’t read and which may be better than the one I read. On the website http://truewest.ning.com/forum/topics/luke-short-his-wife-hettie, Mr. Wood says, “I've spent 5 years researching Luke Short and had many of the same questions you have. I own every book, that I know of, written about Luke, every magazine article, newspaper article and still I have questions.” Mr. Wood runs a website himself, http://www.lukeshort.info/


Luke Short appears rarely in Western fiction. He was played by a short, mustacheless Wally Cassell in Jim Courtright, a 1955 episode of Stories of the Century, with Courtright played by Robert Knapp. It's hero Matt Clark who talks Luke out of paying protection money to Courtright. Luke manages to outdraw Jim in the White Elephant, which is the usual ratty wooden frame saloon with batwing doors and not the elegant carpeted upper floor of reality.

In 1960, Bob Steele played Luke in the an episode of the CBS series The Texan. But I know of no movie which featured Luke Short. That’s rather a pity because it was in many ways a classic Western life and would make a great film.