See it if it comes on TV

An early-50s Western with a 1940s look and feel to it, this is a pretty standard oater about three Confederate soldiers returning to Texas after the war, brothers Robert Ryan and Rock Hudson, and ranch foreman James Arness. Hudson and Arness get right back into ranch life but Major Ryan can’t settle down and goes on to build an empire by rustling, corrupting judges and so forth. Ryan in German. Von Ryan?
Ryan is, as always, fine. He dominates this picture and without him it would have been very pale. Arness (6’ 7” or over 2m, so called Tiny) is adequate, Hudson just about acceptable. John McIntire is, as ever, powerful, convincing and sympathetic, as Ryan and Rock’s father (actually he was only two years older than his ‘son’, Robert Ryan). Raymond Burr is there too (he actually appeared in eleven Westerns before turning to TV), rather impressive as the slimy villain - Ryan gets him and snaffles his wife Julie Adams too. This was the tenth of Julie’s 30 Westerns and she was always pretty solid. Ray Burr, crook
Rodolfo Acosta is a Mexican general. Dennis Weaver, in his very first Western, also appears as Ryan’s overdressed right-hand man, Dandy. So the acting is either passable or downright good. 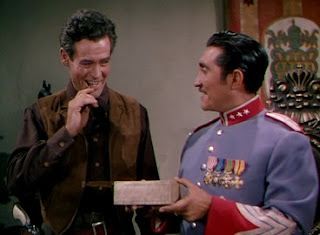 Rodolfo
The photography and music are OK. It was filmed up at Newhall, and California doesn’t really pass for Texas. They all seem to have very brightly-colored costumes. The story nips along and is satisfactorily directed by Budd Boetticher, though far from his best work and nothing like up to the standard of his late-50s Randolph Scott movies.


But that’s the trouble with this Western: it’s just OK. It never really grabs you. It’s routine. 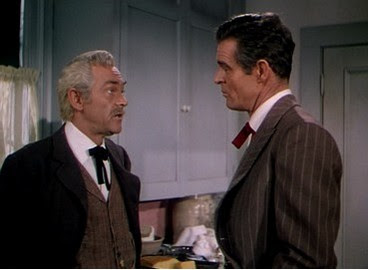 Father and son: McIntire as Dad was only 2 years older than his 'son'
Part of the fault must be down to Louis Stevens who wrote the screenplay from his own story. It’s wooden and predictable.


It also isn’t at all clear why it should be called ‘Horizons West’. Ryan goes south and starts wearing gray Eastern clothes. Perhaps that’s the trouble: there’s isn’t enough ‘Western’ about it. 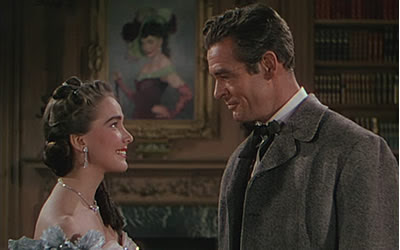 Julie and Robert
See it if it comes on TV. Robert Ryan is always worth a watch and, as I say, there are some good supporting actors. Miss Adams is certainly decorative. But all in all, don’t bother to buy the DVD. 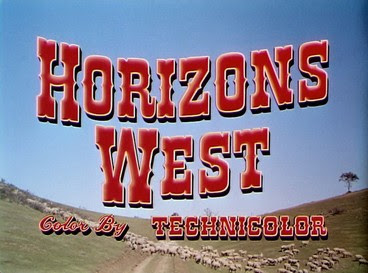