Gunsmoke (no relation to the TV series of that name) is one of the many B-Westerns that Audie Murphy made for Universal between 1950 and 1964, when he switched to Columbia. It's quite fun, and it was an improvement on his first three.


This was Nathan Juran’s first Western as director. He’d been art director on seven, including Winchester ’73, so presumably had learnt something of the craft. Indeed, the movie is properly paced, with the right blend of action and conversation/plot. He would do two more Audie oaters later. 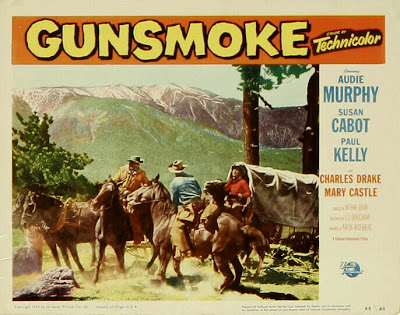 Based on the novel Roughshod by Norman A Fox, the movie was written by old Western hand DD Beauchamp. I have a sneaking suspicion that the character (excellently) played by Saul Rubinek in Unforgiven, the hack writer WW Beauchamp, is named in honor of DD. Both pronounced the name bo-champ instead of the beechum usual with that moniker. DD did a few Audie Westerns, including the rather good Ride Clear of Diablo in ’54. He did the Ronald Reagan Law and Order and various other B-ish Westerns. Perhaps his best work was the Glenn Ford picture The Man from the Alamo, which was quite classy. 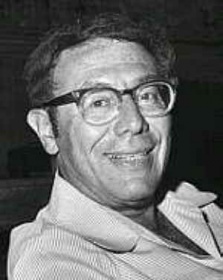 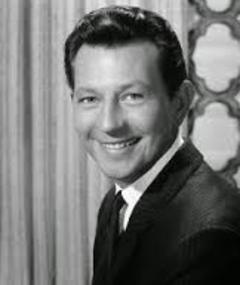 
The story tells of a gun for hire Reb Kittridge (Murphy) who wants to settle down and get a ranch. We are 1890s Montana (though the costumes, guns and so on say 1870s, as they usually did). Reb arrives in town where decent small rancher Dan Saxon (Paul Kelly, the crooked colonel from Springfield Rifle) is sure that Reb has come to kill him, contracted by the evil cattle baron Telford (Donald Randolph). Good old DD gives Saxon the hallowed line, “There’s a stage leaving town in a couple of hours. Be on it.” Great. They shoot it out but Reb just wings the rancher, who then takes a shine to him and comes up with a neat plan to get Reb to help him out. 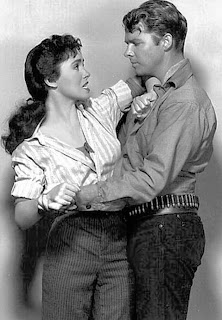 Well, I won’t go into the intricacies of the plot but as you may imagine there’s a girl, Saxon’s daughter Rita, played by Susan Cabot. Cabot was in six Westerns, three of them with Audie. Rita has a no-good boyfriend, Curly (Jack Kelly, for once not a gambler) who hopes to marry her and inherit the ranch but he stands no chance against our hero. He even tries to backshoot Audie with a buffalo gun from ambush, he’s that low.


When Reb won’t work for Telford and joins rancher Saxon, Telford hires Reb’s best friend, fellow hired gun Johnny (Charles Drake) to kill him, so we have an interesting set up. 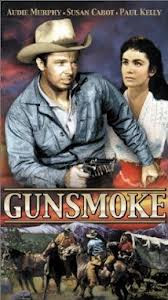 There’s a cattle drive as Reb and Saxon try to get the beef to market and pay off Telford’s mortgage and save the ranch. As on all cattle drives, there will be a stampede, shooting and all sorts of skullduggery.


Chubby Johnson is the doc in town and it’s always nice to see him again. There’s the inevitable saloon girl (Mary Castle) who sings the inevitable song (‘See what the boys in the back room will have’ in this case, so Mary does her Marlene bit).


Audie, in keeping with his tough-guy gunman part, appears unshaven and in dirty clothes sometimes, which was quite a departure for him. He seemed at last ready to shed his 'kid' tag.


No one would pretend that Gunsmoke is a devastatingly original Western but it's a good, solid 50s Audie oater, well-paced, enjoyable and entertaining. And Murphy was growing into the part.