By the mid-1960s we have to admit that the long series of Audie Murphy Westerns for Universal were getting a bit samey. Not that they ever became bad, you understand. They always, even on modest budgets, had reasonable production values – some decent photography, for example, and good character actors in support, even a train– but they were pretty formulaic.


Gunpoint, though, Audie's last oater for Universal, is a bit better. 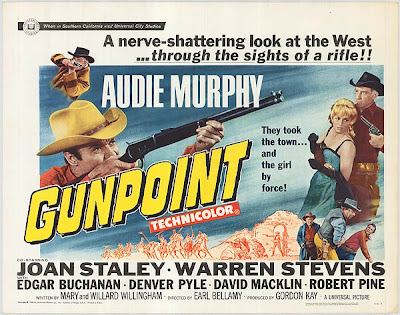 No, it isn't very nerve-shattering, I'm afraid. It's not bad, though.
It has the appearance of a ‘proper’ 50s Western, with Gordon Kay producing, lovely Utah locations, stirring Hans Salter music, an excellent cast, a tight Willinghams screenplay, and Audie on top form. It was directed by Earl Bellamy (The Toughest Gun in Tombstone, Seminole Uprising, Blackjack Ketchum, Desperado, etc., going back to Charles Starrett oaters in the 40s).

Audie is a tough marshal in a southern Colorado town. We must be somewhere between 1876 and 1912 because bandits make depredations in the State of Colorado and flee to the Territory of New Mexico. But then 95% of Westerns are set between those dates, aren’t they.


The raiders are led by the cruel Drago (TV Western actor Morgan Woodward) but he doesn’t have much of a part. He just has to dress in black and look sinister. We don’t get to know any of the other desperadoes either; they are just 2D screen bandits, there to get shot. 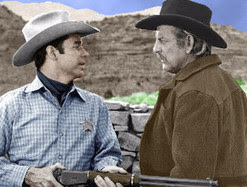 Sheriff Audie and bitter 'n' twisted Deputy Denver
The bad guys with color and a decent part are a splendid group of actors. First we have Denver Pyle as the deputy who betrays the sheriff by selling secrets to the badmen. He doesn’t do it for money; rather because he has been passed over for sheriff by a mere stripling, he who had commanded so bravely in the war. He’s rather good in the part, actually. I don't imagine Mr. Pyle ever really held his breath just before the Best Actor Oscar was to be announced but time and again he was solid in minor character parts. 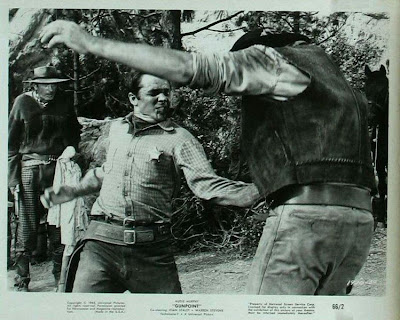 Audie beats the bully in a fitsfight observed by Royal Dano as dumb Ode. Great stuff!
And then we have a splendid Edgar Buchanan, enjoying himself in the role of the mean white-trash Pappy with mentally deficient sons, much like Charles Kemper as Uncle Shiloh Clegg in Wagonmaster or Donald Pleasance as Preacher Quint in Will Penny. One dumb son, Ode, is played by good old Royal Dano and the other, Big Ab, by another TV Western regular, Kelly Thordsen. They make a great trio. 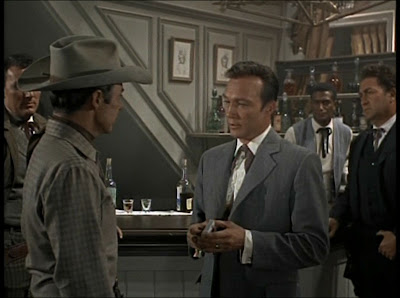 Slick gambler Nate, friend or foe?
The dress heavy, or semi-heavy anyway because he’s quite sympathetic and we kinda like him, is Nate Harlan (Warren Stevens), the cynical saloon owner (on the New Mexico side) who is in love with Uvalde (Joan Staley). Audie knows her from back in Uvalde when they were in love but then their ways parted. Audie calls her Bonnie. This is a classic Western convention: when women have the names of places, they are ‘no good’ saloon girls or even prostitutes. Audie knew her when she was young and pure but once Nate got hold of her she slipped down the slippery slope to dancehall-girldom. La Staley is rather attractive. She only did two Western movies, this and the B Gun Fight in 1961. Nate is played by Warren Stevens who participated in only six B-Westerns, including a small part in another Audie effort, No Name on the Bullet, but did loads of TV shows. In Gunpoint he looks a bit like Jack Kelly and indeed the role would have suited that Maverick. 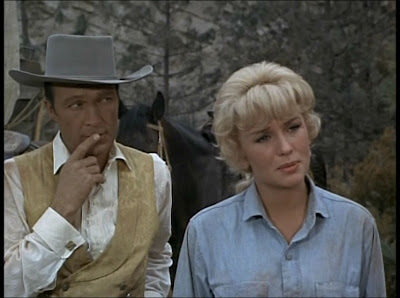 Nate begins to see he's losing her to Audie...
There’s also a youth on the posse, played by David Macklin, who was 19 or 20. One wonders why they needed one, with the eternal kid Audie around but I guess it was ’66 and even Audie was getting on, and maybe they thought having a kid would add age and weight to the sheriff’s part.


Anyway, the acting is either perfectly satisfactory or downright good, so no complaints there at all.


The photography (by William Margulies) of Utah locations is very good too. And the Hans Salter music is lovely. The writing is traditional, predictable if you like, but professional and solid.  Mr. Willingham was an experienced Western stuntman who had started writing on Audie’s TV show Whispering Smith. He and Mrs. Willingham did a fair few Audie screenplays. 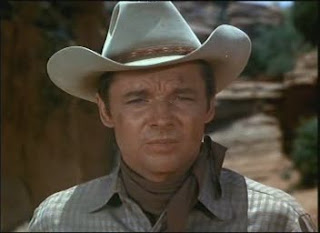 Still baby-faced after all these years
There's some budget-saving footage reused from other Westerns but that's OK.

Gunpoint is far from the best Audie B-Western. But it isn’t at all bad and if it follows the formula so closely, well, at least you feel comfortable with it, don’t you? I mean, what do you want from a Western, art? Originality? You’re in the wrong genre, my friend. That did happen but it was oh, so rare, and 99% of oaters were simple-to-follow straight-down-the-trail fun and action pieces – and none the worse for that. Audie left Universal on quite a high. I'm afraid it was downhill thenceforth. It's a pity, really, that he didn't end with this one.