Custer of the West (Security Pictures, 1967)

Robert Shaw, Quint in Jaws, didn’t do Westerns. He was a drunken priest in the dreadful sub-spaghetti (if such a dire genre be possible) A Town Called Hell (or sometimes Bastard) in 1971. And he was Custer. That was all. Actually, he quite resembles some photos of Wyatt Earp, so he should probably have done a Wyatt picture.

His GA Custer led the 7th Cavalry in Custer of the West, a big ‘Super Technirama 70’ picture of 1969. It was too long and the direction by Robert Siodmak dragged. Siodmak was also no Western specialist: he had only done one Karl May story with Lex Barker.

Quint as Custer
As with all Custer films, it bears little relation to history. Custer trains up the 7th Cavalry himself with grueling physical punishment. He is against the railroad interests (the exact opposite of the truth), is only informed late on of the discovery of gold in the Black Hills and is totally against the miners encroaching on Indian lands. Custer meets Dull Knife (Kieron Moore) just before the battle and tries to persuade him to go back to the reservation. In return, Dull Knife gives Custer (the last man standing) the chance to depart alive, which he refuses. Major Reno takes no part in the fighting and withdraws immediately into trees. The message urging Reno and Benteen to "come up quick" never reaches the intended recipients, the dispatch riders being killed by the Indians. And so on.  But as I have often said in this blog, if you are expecting Western movies to give you accurate history, you are on a hiding to nothing.


Telescoping Custer’s short but very full career into a couple of screen hours is notoriously difficult especially if you try, as Raoul Walsh did, to show his whole life. Why then, one wonders, fill up valuable screen time with invented and apparently unrelated happenings? The escape of a sergeant from Sioux by hugging a log as it hurtles down a water chute into a lake goes on for minutes and minutes. There’s a desert crossing in pursuit of Indians and firing of a cannon on them. A train is attacked by Indians and crashes off a burning trestle. There’s the massacre by Indians of hundreds of civilians in a town on Independence Day. The tedious episode with the deserter ‘Mulligan’ gives us a good opportunity to appreciate the great Robert Ryan but it is totally extraneous to the plot and furthermore is poorly written with meandering, pointless dialogue (Bernard Gordon and Julian Zimet).

Ryan: wasted
The acting is sub-standard. Alcoholic Major Reno is played by Ty Hardin with 1960s facial hair. Capt. Benteen is portrayed as passionately pro-Indian by Jeffrey Hunter in a Beverly Hills tan. Glaswegian Mary Ure (Mrs. John Osborne but the future Mrs. Shaw) in her only Western is a very unconvincing Libby. None of these characters is helped by the poor lines he or she is obliged to deliver (at one point Custer says to Dull Knife, "I know you got human rights"). About the best is Lawrence Tierney as Sheridan, who figures largely in the story. 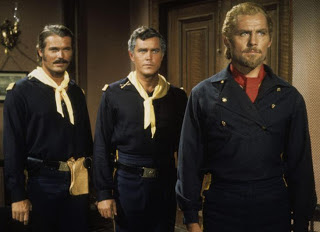 Reno, Benteen and Custer
Spain does duty for Dakota and Montana and the cinematographer was Spaniard Cecilio Paniagua (who later did the fun 100 Rifles). The photography isn’t bad. I also liked the modern, slightly jazzy orchestral score by Bernardo Segall.
There's no 'royal family', the nepotist Custer network, his brother Tom and so on, and there are no pro- and anti-Custer cliques.


Details are wrong: for example, much is made of the Stars and Stripes but a 50-star version is used, Custer wields a saber at Little Bighorn, he uses a silver Colt revolver and his troops have Winchester repeater rifles. And so on. In some ways these are minor matters but cumulatively they just make the whole thing look fake.


Really, Custer of the West is just a tedious, inaccurate biopic, poorly acted and spiced up with some invented action, much of it ridiculous. Give it a miss. You'd be better off with They Died With Their Boots On, an equally absurd picture historically speaking but at least it's well made and fun.