A fine little movie, only 79 minutes, black & white, The Ride Back was the sleeper of 1957. That was a good year: there were big A-Westerns such as The Tin Star, Gunfight at the OK Corral and 3:10 to Yuma. Less good but big box-office draws were James Stewart in Night Passage and Alan Ladd in The Big Land. In the more minor league there were the excellent Budd Boetticher/Randolph Scott Westerns Decision at Sundown and The Tall T and the trashy but popular Samuel Fuller picture Forty Guns. But while this movie may not enjoy the fame and reputation of those, it was taut, gripping, extremely well acted, directed and photographed and in my view ranks with The Tin Star and 3:10 as the very best Westerns of that year. 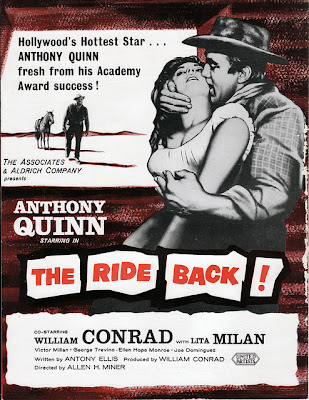 When William Conrad was Matt Dillon in the radio version of Gunsmoke, he came across a script by Antony Ellis that he was convinced would make a good movie. He persuaded Robert Aldrich of that and Aldrich agreed to produce it.


Allen H Miner directed. It’s not a name that comes immediately to mind when discussing Western directors. In fact it was only his second of three (he also did some TV work). He had been a war photographer who had seen much bitter action. One wonders why Aldrich did not direct himself. It is said that a fair number of scenes were handled by Aldrich’s friend, second unit director Oscar Rudolph. Whatever the truth, it is a tightly directed picture of real class.


Conrad, not a natural Westerner, is marvelous as the portly, sweaty deputy, reluctant, apprehensive, then downright afraid but nevertheless determined to accomplish his task. It emerges that he considers himself a failure in life; he has achieved nothing and his wife hates him. It makes us understand that courage is not the absence of fear. It is being afraid and doing it anyway.

Anthony Quinn’s character, on the other hand, is roguish, wily, handsome and brave. His hellcat-ish woman (Lita Milan) adores him. He loves children. Conrad envies Quinn, who is everything Conrad is not.


Yet slowly a mutual respect builds.


Quinn is astonishingly powerful in a part that asked to be hammed up yet which he underplays with control and discipline. What a fine actor he was. 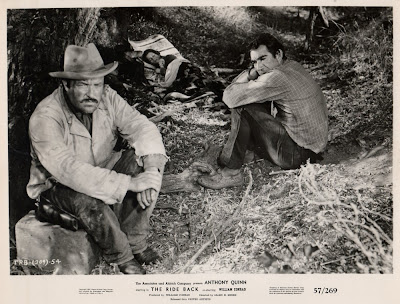 The screenplay gives us an exciting story as the deputy takes the villain, who fled to Mexico, back for trial, and faces escape attempts and Apaches along the way. It’s a minimalist Western which does not offer gunfights and action so much as an in-depth character study. Yet the danger that pervades the story prevents it being just a talky play.


They find a cabin containing a slain family, then a survivor, a little traumatized girl. The tale is grim, pitiless and savage. 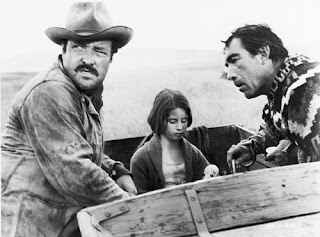 There is glowing black & white photography by Joe Biroc (Aldrich’s preferred cinematographer). It was filmed on location in Mexico.


Jorge Treviño is also terrific as the fat Mexican policeman.


The music, by Frank Devol, is very good – dark, discordant and tense.


It’s a ‘little’ Western with a small cast and, probably, low budget. In other hands this might have been a tame, predictable effort but Conrad and Quinn make it superb, and the tight direction, high-quality writing and good camera work make it one of the best Westerns of the late 50s. Outstanding. 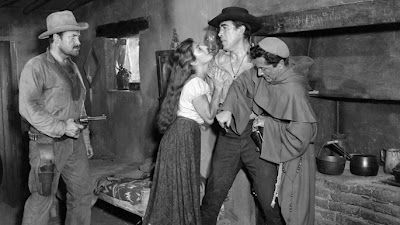