Close to a masterpiece

There are several good rodeo movies. One thinks in particular of Bronco Buster directed by Budd Boetticher (the same year, 1952) with Chill Wills as a rodeo clown, Cliff Robertson’s JW Coop (1971), When Legends Die (1972) with Richard Widmark or Junior Bonner the same year, in which Sam Peckinpah drew an elegiac picture of rodeo and elicited a superb performance from his actors, especially Steve McQueen. But tall in the saddle above them all is this last classic picture by RKO, a film with a few flaws but which comes close to being a masterpiece. 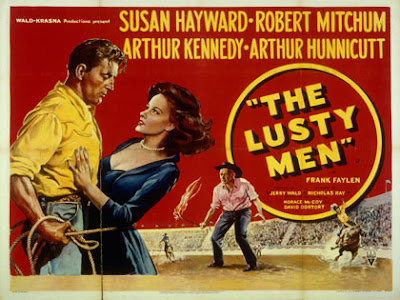 Standard semi-lurid poster
Whether rodeo films are Westerns is a question and this one probably isn’t. It doesn’t deal with essential Western themes such as man against nature or Indians on the nineteenth century frontier. But it is a later page in the history of the Western in the sense that it deals with the sadness of the passing of the old Western ways and the beat-up Westerner with nowhere to go.


The flaws? Well, although Susan Hayward was very beautiful, she was a New Yorker, and Arthur Kennedy was an urbane son of Massachusetts; the two make fundamentally unconvincing Westerners. They are too posh, their diction is too Eastern and they don’t quite cut it as a rustic Texas ranch hand and his ex-barmaid wife struggling to make a buck to get a place of their own. The script had to be rewritten to enlarge Hayward’s part. She had top billing (above Robert Mitchum) and was on expensive loan from Fox. (I would have had Ida Lupino: although London-born, she did that wrong-side-of-the-tracks Western woman supremely well). Hayward was a very talented actress and in fact was very good indeed in some Westerns (Canyon Passage and Rawhide in particular) but in this one, for me, she doesn't quite bring it off.

Another weakness is the writing by New York novelist David Dortort and journeyman screenwriter Horace McCoy - although he was a rodeo buff. A lot of the script was made up as they went along - three others worked on it, uncredited - and it was very mixed. There are moving, lyrical parts but at other times it diverges so far from the Western as to become soap opera. Bizarrely, in the middle of filming, McCoy went off to write part of the other 1952 rodeo picture, Universal's Bronco Buster. Then he came back and wrote the  authentic-sounding announcements by the rodeo MCs on The Lusty Men.

And the title was lurid - courtesy, of course, of studio boss Howard Hughes. It really should have been called The Losers. 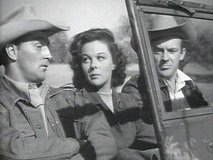 Mitchum, Hayward, Kennedy
But that’s all the carping I can do. The rest is superb. In particular, Nicholas Ray’s direction. What an interesting film maker he was; just think of Johnny Guitar or The True Story of Jesse James – though the latter movie was mutilated by the studio. He happily interspersed artistic creation with banal hack work. The Lusty Men is in the first category. Here he captures the atmosphere (just as Sam Peckinpah later did in Junior Bonner, or, to be fair, as Burt Kennedy did in The Rounders) with the inter-cutting of documentary footage – Livermore, Pendleton, Spokane, Tucson. We can almost taste the dust and feel the jolts as bodies crash to the dirt. There’s some luminous black & white photography by Lee Garmes. 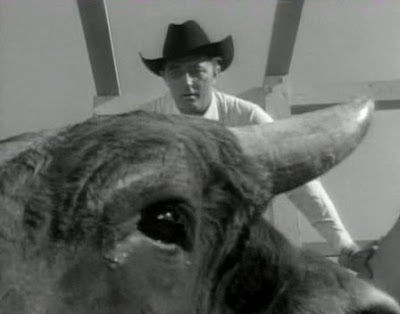 Fine photography
The subtly managed minor characters are brilliantly handled (the moment when the young tomboy (Carol Nugent) mouths silently “I love you” to the dying cowpoke, for example, is extremely moving). 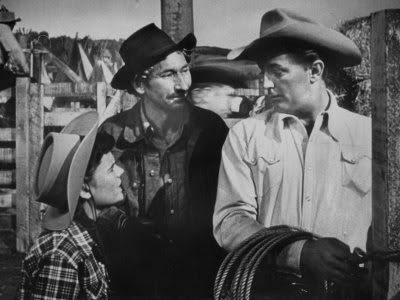 Nugent, Hunnicutt: excellent support acting
Arthur Hunnicutt turns in the performance of his life as the beat-up old timer. The nomadic pointlessness of the whole rodeo circus is underlined. The ending is down-beat (studio pressure for a happy ending was resisted). 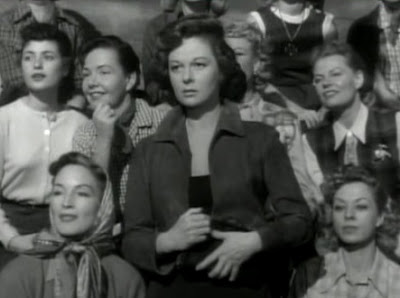 The film is as much about the women as the lusty men
Most of all, of course, there is the performance of Robert Mitchum. He towers over this, literally in the sense that he seems so much taller than anyone else but also in the authority and impressiveness of his portrayal. The sheer character and guts of the man dominate the film. It was one of his finest roles. Mitchum was fully capable of sleepwalking through a Western (look at Young Billy Young, for example, or The Good Guys and the Bad Guys) and he used to say that they painted eyeballs onto his closed lids, but when he was fired up he was truly magnificent. Tough, mean, hard as nails, he hints at a heart of marshmallow. He was in some ways the perfect Western hero. You believe totally in every one of his broken bones and erstwhile triumphs. He’s down on his luck, all broke up, an ex-champ with nowhere to go, but he retains one trait in spades, and that is integrity.

Ray wanted to work with Mitch again and tried to  get him for the Sterling Hayden part in Johnny Guitar over at Republic but sadly it was not to be. Pity, because they did superb work together on The Lusty Men. 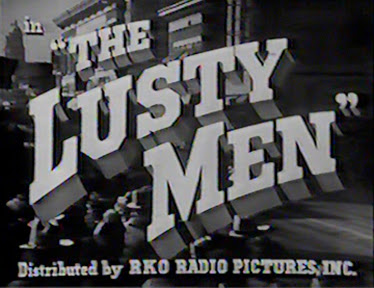 A must-see
Tom Gries was an associate producer and he always had interesting and thoughtful input to a Western, ususally directing and/or writing (The Bushwhackers, Will Penny, 100 Rifles, all good movies.)
The movie got good reviews, which Mitchum wasn't entirely used to. Bosley Crowther in The New York Times said, "With a literal and candid use of camera that would stand out in the documentary field, Director Nicholas Ray has really captured the muscle and thump of rodeos." But the public didn't know what to make of a drab modern Western with a tragic ending and they went to the rodeo instead.
But this is the rodeo movie and a must-see.