Hard on the hooves of Young Billy Young, Robert Mitchum made his last starring mainstream Western, The Good Guys and the Bad Guys. It really wasn’t very good.


Mitchum was tired of Westerns (this was his eighteenth in twenty-six years), he was aging and not so outrageous or hip any more (the scandalous dope-smoking habits of his past were now commonplace) and on the set of this one he was complaining (“How in hell did I get into this picture anyway?”) Throughout it, he just looks glum. 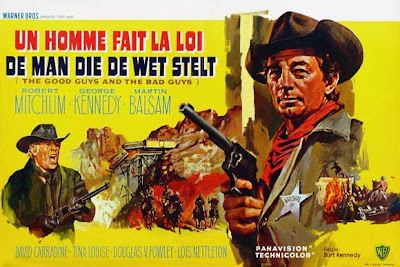 The European poster seemed to play it straight
The movie was directed (though not scripted) by Burt Kennedy and it has something of his Support Your Local Sheriff about it. Much of it is played for laughs (laughs, though, which it often does not get) and there is an attempt at satire. Even the title is a bit self-mocking. However, the pace is too slow. The mass chase of the train by automobiles goes on too long. The script by Ronald M Cohen (Last Stand at Saber River) and Dennis Shryack (Pale Rider), both capable of good stuff, is undistinguished.


The whole thing comes across as an attempt at Ride the High Country but diluted to the point of transparency.


It’s the story of two aging Westerners, a sheriff (Mitchum) and an outlaw (George Kennedy), who feel out of place in the early twentieth century of gaslights, motor cars and telephones (Mitchum’s town is called Progress in case we are in any doubt) and who team up to beat a band of modern thugs, the kind who shoot people in the back. There’s a smarmy, philandering politician mayor (Martin Balsam) who is quite good and stalwart Douglas Fowley is fun as the Gabbyesque old timer pard of Mitchum, Grundy (the best part of the movie). There’s also the stalwartess Marie Windsor as the saloon owner. 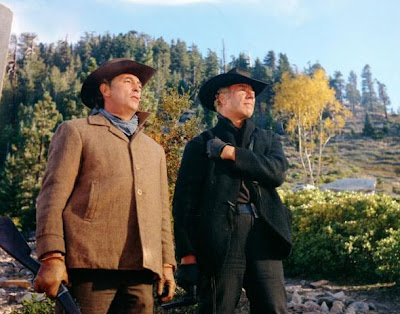 Two old hands
There are two Carradines (David and father John) and John Davis Chandler. The bad guys look mean alright but the screenplay doesn’t allow them to develop in any way. Kennedy is the pick of the bunch, acting-wise, and does it with the gusto that Mitchum lacked. He was fully capable of hamming it up but here manages energy without overacting.


There’s a grim title song warbled by Glenn Yarbrough, which, most unfortunately, is reprised twice during the action. At least Mitchum himself didn’t sing it, which was a blessing.

The bad guys (left)
The little boy Billy who idolizes the sheriff is uncredited but looks like the kid Horace from the previous year’s Will Penny, Jon Gries.


The scenery is lovely. It looks very like Colorado but was in fact shot around Chama, New Mexico. The train shots are great (Cumbres and Toltec Scenic Railroad) and the crash spectacular. Nowadays they can’t even afford to have a train at all, let alone crash one. Harry Stradling Jr. was the photographer so there was quality there. 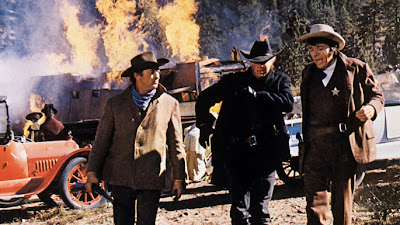 Crash
The three bad guys wait on the train at the depot, High Noon style. But the train doesn’t stop…


The best bit is what Sheriff Flagg does with the gold watch they pension him off with.