Now if there were a Western Hall of Shame...

On this blog we’ve talked from time to time about the British Western. Everyone knows about Italian Westerns but not everyone is aware that other countries, like France, Germany and yes, Great Britain, had their own traditions of making Western movies.


It’s easy to be superior about non-American Westerns. I am, very superior, about spaghettis. And indeed, sometimes they didn’t get it right at all, even when they were using American Western stars. Occasionally these movies were good and true to the Western tradition. Take Shalako, for example, a very European film version of a Louis L’Amour story. It’s rather well done and Sean Connery, especially, makes a surprisingly convincing Western lead.


There were some real turkeys among them too. The Singer Not The Song was odd (and needed a comma in the title). Catlow was pretty well junk. And Lawman and its successor Chato’s Land were absolutely awful. Worse, they were exploitative pulp with no understanding of the genre. 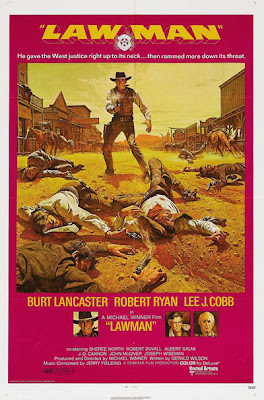 Pulp
Yet Lawman had some great Western actors in it. The first four names in the billing were: Burt Lancaster, Robert Ryan, Lee J Cobb and Robert Duvall. Well, you’d want to see a Western with that line-up, wouldn’t you?


Superficially, you have good Western actors and a fairly standard Western plot. Burt Lancaster is an implacable lawman come to arrest some cowboys for shooting someone in his town. Lee J Cobb is the big rancher who resists. OK. Burt and Cobb could both overact, especially Cobb, but they could be alright too. A straight rip-off of the Last Train from Gun Hill/Man With The Gun plot. That would work. 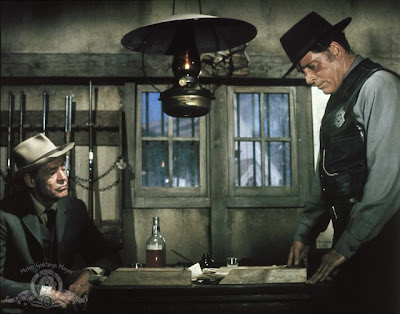 Washed-up sheriff and implacable lawman
Robert Ryan is the washed-up sheriff. Sounds good. Robert Duvall is one of the fugitives. Fine. And there’s a nice bit of Mexican scenery shot by Robert Paynter (though a lot is filmed ‘in town’). We get satisfactory if undistinguished, rather overdramatic music with a Mexican tinge by Jerry Fielding. None of this, yet, is actually bad.


The trouble comes from the direction and the writing. The movie is a series of clichés, right from the opening scene when Lancaster comes in, Tin Star-style, towing a dead man on a horse. Western lovers might like the references, were they affectionate quotations, but you just get the feeling that these are not: they are cynical rip-offs. 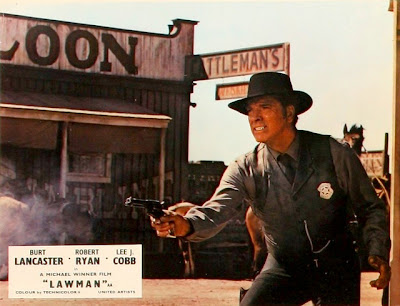 Wyatt Earp he ain't
The continuity is dreadful and shows a lack of respect for the viewer.


It’s unpleasantly violent, in a spaghetti western way (and indeed Lawman is heavily influenced by the Italian western). But it’s violence that appears just gratuitous; it has no point or message. It’s there to be gory. 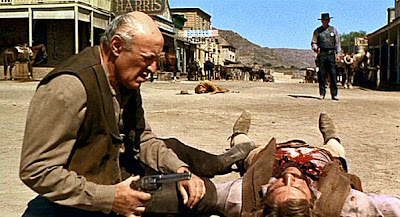 Trashily violent
The script (Gerald Wilson) is abysmally clunky and wooden. It comes across as plain amateurish. Ryan, post The Wild Bunch and in his very last Western, is the only one who manages to overcome it and shine. The others, even Lancaster and Cobb, just can’t do anything with such dire words. You get the feeling that Sheree North is just there to get into bed with Burt and show her breasts. It all looks cheap and 70s trashy. The ending is utterly implausible, even by 1970s Western standards. No, sorry, but it just won’t do.


Direction was by Michael Winner, a Londoner who wrote a column as a restaurant critic for a British newspaper and liked films. He is best known for the later series of pulp Death Wish movies with Charles Bronson, which was probably a more suitable destination for him. His favorite actor, and a friend, was Marlon Brando. Brando didn’t understand Westerns either. 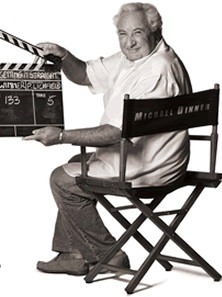 Michael Winner. Shoulda stuck to restaurants.
His writer was Gerald Wilson. Not the jazz trumpeter. Come to think of it, the big band leader would probably have written a better Western.


The Color by De Luxe has faded on my DVD and the sound is none too hot either. But I can’t imagine anyone ever wanting to remaster the print. 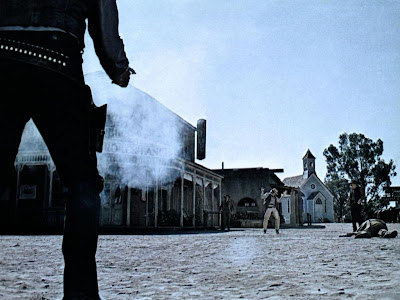 Been there, done that
It just comes over as a money-making exercise with no desire to make a good Western. Wilson and Winner made the cheesy Chato’s Land the following year, with similar results. That one had Charles Bronson in the lead. That’s probably where they got the idea for Death Wish. Winner and Wilson show no understanding, affection or respect for the genre. If there were a Western Hall of Shame, they should be inducted into it.