A bandit reformed by the love of a maid

Knight of the Trail is a rather charming 23-minute two-reeler produced and written by Thomas Ince, and directed by and starring William S Hart. Early as the film might be (1915) it was already a remake of a 1911 short. It tells of a bandit reformed by the love of a maid. This is classic Hart territory, of course. 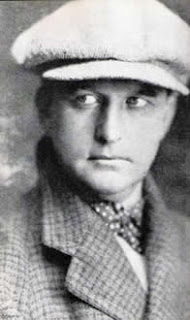 The great Thomas Ince
Jim Treen (Hart) is a cowboy with all the proper worn range duds and accessories so dear to Hart. He appears to be riding Fritz too. It’s a pinto anyway. 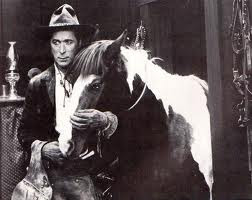 He loves a fair maiden, the waitress Molly (Leona Hutton). Rival to Jim for the affections of the winsome beauty is dastardly mine speculator Bill Carey, played by Frank Borzage, whose Western career stretched all the way from Days of ’49 in 1913 to the 1941 version of Billy the Kid. He actually isn’t after her heart at all, just her savings account, and he leaves her standing at the altar (or in a house anyway) as he takes the stage to the railroad depot. 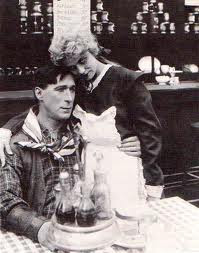 Jim and Molly. Made for each other.
Jim had been rejected, you see, because such a pure girl could never marry a robber. But our hero turns in the stolen loot to the sheriff, reforms, chases Carey and catches him at the station. There are fisticuffs, then there is gunplay. It’s dramatic stuff.


You may guess, and I don’t think that it constitutes a spoiler to tell you, that Jim and his true love live happily ever after.

These early oaters were hardly more than romantic episodes, really, but they have a charm of their own.


Hart had only started Westerns in 1914, yet this was already his twentieth (he did 17 in 1915). The shorts like Knight of the Trail became enormously popular and played for a decade afterwards under various titles all over America. They led to the feature-length movies that made Hart’s name.