For a Few Dollars More aka Per qualche dollaro in più (UA, 1967)

The best of the three 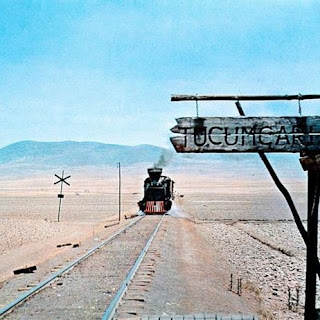 Even a train
Then there is Lee Van Cleef, rescued from obscurity by Leone to star as Colonel Mortimer, the Virginian gentleman bounty hunter, who partners the callow but tough Clint, a little as Gary Cooper teamed up with Burt Lancaster in Vera Cruz. And indeed, there are many references in this movie. Leone loved 50s Hollywood Westerns and he quotes, affectionately, I would say, not as rip-offs or clichés, various of them, notably The Bounty Hunter (Warner Bros, 1954), a Randolph Scott B -oater directed by André de Toth. Van Cleef is actually very good, far better than the stereotyped script allowed, and for the first time almost introduced an element of the moral into a spaghetti western: he actually has a reason for chasing El Indio, played by Gian Maria Volontè, who is even more vicious and depraved than he was as Ramon in Fistful. 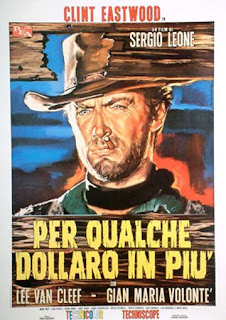 They didn't make it just for a few more dollars - or did they?
It was made rapidly to cash in on Fistful’s success (hence the title) and Clint has exactly the same poncho, cheroot, gun and grunt, but this time he is a little more relaxed and shows the odd twinkle, the occasional double-take, the odd one-liner. Actually, the whole movie is more confident and self-assured.


Roger Ebert wrote that “the film is one great old Western cliché after another. They aren't done well, but they're over-done well.” I suppose the movie’s amusing, in that way. 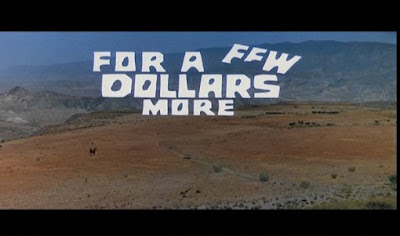 Those shot-at titles
But it’s still a spaghetti western, i.e. a stylized, trash-art movie. The music is lousy again: this time each character has a theme, like a (very) poor man’s Wagner opera. Of course there is something operatic about these westerns. It's just not so much grand opera as horse opera.


Everything is dubbed: the lip-synching is poor and the sounds are absurdly magnified (Leone was obsessed by ‘sound design’) and the whole thing looks, well, cheap.

Colonel Mortimer: the best actor in it
Even later big-budget Leone films looked cheap. The scenery is wrong, the Boccaccio faces are too European, even the horses are some fancy high-stepping Andalusians. There are the same Roman Catholic references throughout: the duel in the church, Volontè planning the bank robbery from the pulpit with his gang around him, lit like Renaissance disciples. Very stylish, no doubt, even arty – in short, European, and no doubt the French auteuristes loved it, but it’s not a Western with a capital W, only a spaghetti western.