After the three Dollars movies directed by Sergio Leone, Django and its 31 sequels, directed by Leone’s friend Sergio Corbucci (with Leone himself directing some scenes) are probably the most famous so-called spaghetti westerns. 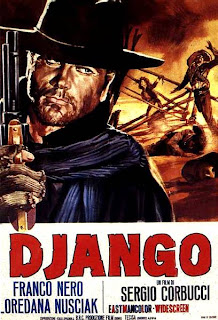 Films directed by Leone and Corbucci have much in common: cartoon violence, very poor sound, bad dubbing, minimal and low-quality dialogue and two-dimensional characterization. These Italian-Spanish and sometimes German co-productions are admired by spaghetti buffs and Django is considered a ‘cult movie’ by many, not least, of course, Quentin Tarantino. 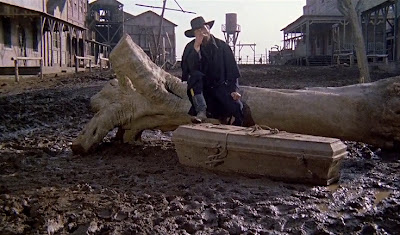 There are differences too: Django has more traditional, less jangly, or should we say djangly American-style music (Luis Enriques Bacalov). But it is even more violent. Django carries a machine gun around with him in a coffin (and this spawned endless spaghetti westerns with people hiding weapons - usually of mass destruction - in every conceivable container, from coffins to musical instruments). The evil Southern major shoots Mexicans for sport. The even eviller Mexican bandit cuts off a priest’s ear and makes him eat it. And so on. The body count is 138. The film was not released in the UK till 1993 and did not get a certificate in the US. 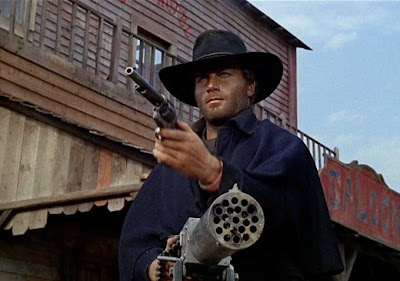 The plot is rudimentary. Corbucci also saw Yojimbo in Rome and admired it so guess what, Django arrives in a town dominated by two rival gangs. (In fact variations on the Yojimbo plot are the basis of 50% of all spaghettis). Like Clint in A Fistful of Dollars, Franco Nero, whose name this movie made, is a grunting outsider with almost supernatural destructive powers who can shoot six men with six pistol shots at two hundred yards with crushed hands. His machine gun has an endless belt of bullets. It can fire for hours and never be reloaded. 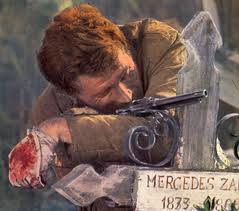 Women play perfunctory roles as whores to be traded. There is no overt sex, more just sleaze. It’s mostly violence.


The beat-up costumes are quite good and the town a muddy rat-hole.


The dubbing is so bad that sometimes victims fall down before the shot. Django’s voice (Tony Russell) doesn’t suit him at all and the bartender Angel Alvarez is voiced by an educated Englishman, which sounds most odd. Lip-synching is rudimentary at best. The gunshots are stupidly loud. They ricochet with a whine even when there’s no ricochet.


The major’s gang wear red sashes and hoods (maybe the Cowboys in Tombstone are a reference to this) to give them a KKK feel. 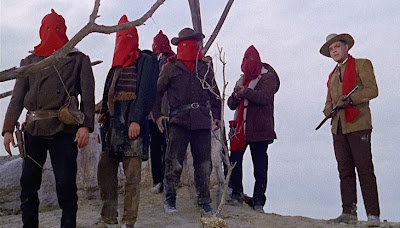 All in all, Django is junk (though Corbucci made even worse Westerns) but is worth a watch for its hypnotic awfulness and to see what all the fuss is about.


Well, I’ve reviewed the three Dollars movies, A Bullet for the General (the nearest a spaghetti got to being a good film) and now the famous Django. What more do you want? I’ve done my duty. Now we can get back to proper Westerns. 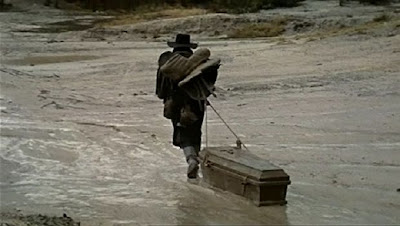