A Bullet for the General aka El Chuncho ¿Quien Sabe? (Argent Films, 1966)

On the front of the DVD box there is a quote from Alex Cox, an expert on spaghetti westerns: “It’s really one of the best, one of the top three Spaghetti Westerns.” That’s true. It might in fact be the best one. Not that it’s especially good. It’s just good by spaghetti standards. It’s not The Wild Bunch (even if Peckinpah was clearly influenced by it). It’s a lot better than Leone’s Mexican revolution picture. It has some good acting. Visually it’s high quality (great attention to detail, quite big budget, Almeria standing in for Mexico). 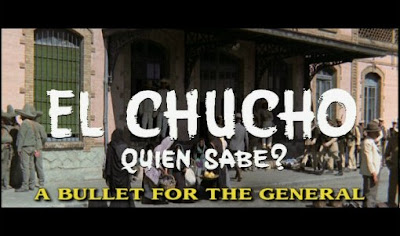 El Chucho, El Chuncho, whatever
The director, Damiano Damiani, interviewed on the DVD, is intelligent and articulate. He says quite clearly that it’s not a Western. It’s an historical film about revolution (all revolution). There was a trend of left-wing, quite political spaghettis and this is probably the best of them. 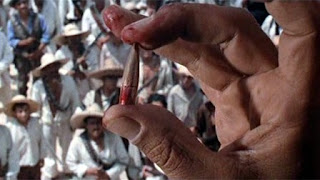 A bullet
It’s anti-American and the gringo is a cold-blooded mercenary. He is well played by Lou Castel (born in Bogotà, real name Ulv Quarzéll). This was quite a common theme: the gringo as arms dealer for pure profit. Sometimes, like Robert Mitchum in Bandido or Van Heflin in Wings of the Hawk, the gringo ‘gets religion’, as it were, and fights for the cause. In this case he’s a pure wicked imperialist. Gian Maria Volontè, variously called El Chucho and El Chuncho (I wonder what the difference is, or if it's just a mistake), is also a bandido out for money. The difference is that he finds a cause and at the end becomes a revolutionary while the gringo gets the gold from his paymasters and sets straight off back to the US. He really is a nasty piece of work.

Revolutionary and gringo mercenary
There’s a passionate revolutionary woman, of course, Adelita (Martine Beswick) but the gringo is too cold to go for her and anyway she loves an incompetent no-good. Klaus Kinski, El Santo, is a half-mad religious fanatic, the revolutionary priest of the sixties and seventies, who throws grenades in the name of the Father (bang), the Son (bang) and the Holy Ghost (bang bang). Jaime Fernandez is the general of the (American) title and looks a bit like Brando in Zapata costume. A landowner (Andrea Checchi) is casually murdered by the mob. It’s pretty red, this film. It was written by Franco Solinas, who had done The Battle of Algiers, so it has the pedigree. 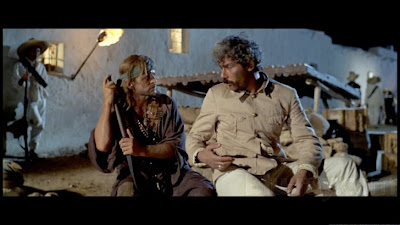 Religious maniac and bandit-turned-revolutionary
The music is by a Spaniard, Luis Enrique Bacalov, and is right for a Mexican drama. He later did Il Postino and Kill Bill. So quality there too, although the dreaded Ennio Morricone is also credited. Surprising if Morricone had a hand in it because it sounds quite good.

Plenty of killing
All in all, therefore, fairly good direction, excellent acting (specially from Volontè), a visually high-quality picture, A Bullet for the General has a lot going for it. It’s better than any Leone in this writer’s view. It is occasionally slow and it’s too long (there was a 77-minute version which might have been better; the DVD one is nearly two hours). You have to get used to Mexicans talking accented English to each other and that spaghetti overdubbing, including absurd gunshots (the ones that always whine with ricochet even if they don’t ricochet).


Damiani says it’s called ¿Quien sabe? (it was called this in Italy as well as in Spanish-speaking countries) because the hero genuinely doesn’t know why he’s doing (or in the case of deserting the village, not doing) something but he gradually learns. As Damiani says, this is not a Western but it’s the nearest that spaghettis came to a high-quality film. It’s not pulp like Django. It’s worth a look and is the only spaghetti to get more than a 2-revolvers rating on this blog. 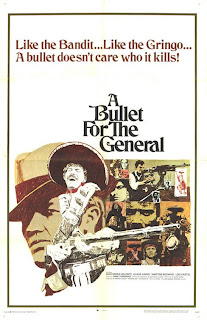