George Sherman directed more Westerns than any other kind of movie, 85 in all. Westernwise he’s probably best known for his last, the John Wayne vehicle Big Jake in 1971 (even though Wayne himself did most of the direction on that), but otherwise under his own steam he made dozens and dozens of B-Westerns, often very good ones, from Hollywood Cowboy in 1937 onwards. 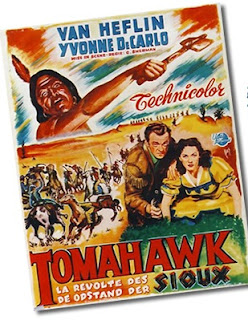 Universal’s Tomahawk in 1951 was at the top end of his output, as far as quality goes. It has certain merits:


It’s a Technicolor picture shot on location in the Black Hills of Dakota. Charles P Boyle was behind the camera: he was a B-Western cinematographer but had worked with Winton Hoch on the Oscar-winning photography of She Wore a Yellow Ribbon so he must have learned something.

Van Heflin starred as (an entirely fictional) Jim Bridger, in his fourth Western (the one before Shane), and while he was no Fonda or Peck, he was a more than adequate Western lead. And although, regrettably, Yvonne De Carlo was the female lead, at least she managed the whole film without a song, and I liked Preston Foster as Colonel Carrington. Alex Nicol has the chief baddy role, as an Indian-hating lieutenant who would have been welcome in the ranks of the SS. Jack Oakie as Bridger’s pard ‘Sol Beckworth’ and Rock Hudson have small parts. So the acting, while not perhaps super-stellar, is perfectly satisfactory.


And then the plot (screenplay by Silvia Richards and Maurice Geraghty from a Daniel Jarrett story) features the Fort Laramie Treaty and Jim Bridger so it has historical interest, although IMDb’s classification of the film as ‘History’ is perhaps somewhat on the optimistic side. Or, put another way, historically it’s a load of tosh. It’s a story of how Jim tries to restore peace with the Sioux in the teeth of the stupid Army, who want to build a wagon road up the Bozeman Trail because gold has been discovered in Montana, and they want a fort right in the Sioux hunting grounds – in defiance of several previous treaties.

Sioux braves                  Bridger argues the Sioux's case          Alex Nicol as SS Lt.
The movie has a great start as, to the strains of ‘Indian’ music, a highly ornate tomahawk thuds into a birch tree. A voiceover tells us that it is 1866, the Laramie Conference. The Sioux and the US Army are lined up facing each other. “It will take a great man to see both sides. Jim Bridger, pioneer, trapper and scout, is such a man.” Of course at this confab the white man speaks with forked tongue. This is a pro-Indian movie in which Red Cloud (John War Eagle, a real Sioux who grew up on the Yankton Indian Reservation in South Dakota but was, bizarrely, born in Leicestershire, England) is a real statesman and the white Americans the bad guys (especially Alex Nicol, of course). Well, the movie was shot in 1950, the year of Broken Arrow.


Although the writers have concertina-ed various historical events into a short period in 1866 and Jim Bridger did not lose an Indian wife and children at the Sand Creek Massacre in 1864, still there is some vague historical plausibility to the movie, to be fair. And accurate or not (mostly not) it’s still quite a fast-paced, exciting adventure.

Yes, Tomahawk is a George Sherman B-Western, and it’s no Broken Arrow, but it’s quite a lot of fun and by no means the worst offering of 1951. 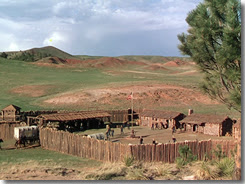