The Sea of Grass should have been the rancher vs. homesteader film par excellence. Spencer Tracy and Katharine Hepburn (their fourth film in harness), a substantial MGM budget, screenplay by Marguerite Roberts, direction by Elia Kazan, what more could you want for an epic and definitive Western?


Quite a lot, actually. Kazan himself said of the film in his autobiography, "It’s the only picture I’ve ever made that I’m ashamed of. Don’t see it."


It’s a sprawling, meandering family saga (dread term) which drones on for 131 minutes, no less, or until you beg for mercy, whichever comes later. 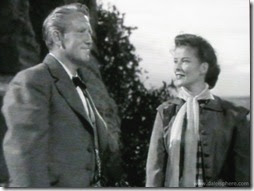 No magic this time
The principals are well enough chosen: Spencer Tracy as New Mexico cattle baron, OK, we can live with that, even if Tracy did seem to be just saying his lines at times; K. Hepburn as St Louis lady come out West to wed the rancher, yes, we can swallow that too, though she hardly sparkles; and Robert Walker as the wastrel son, well, he practically cornered the market in that part, he was the wastrel son. Need a wastrel son? Get Walker on the line. 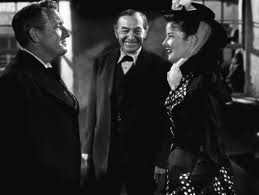 Harry Carey outacts the lot of them (except Edgar)
Harry Carey is, as ever, magisterial in the too-small part of Doc Reid. It was his penultimate Western of 132. Above all, we have a superb Edgar Buchanan as the family cook-cum-nanny in one of his very best roles. He is drôle, sad, wise and crusty, and just brilliant. 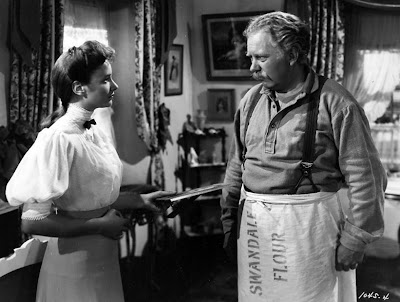 The star of the movie (right) and some bland forgettable actress (left)
The rest of the casting sucks, though. Whoever chose Melvyn Douglas as Hepburn’s lover must have been bonkers. At 46 he looked 66. He was a New Yorker, appears smarmy, plays a shyster lawyer and is utterly improbable as Tracy’s rival. James Bell and Ruth Nelson as the homesteader and his wife were melodrama ham actors of the corniest kind. All the other characters are completely unmemorable ten seconds after the film has ended. 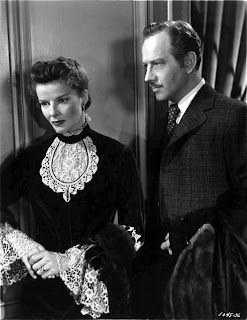 Improbable lover
The production is very poor. There are endless studio sets with back projection of reels and reels of black & white footage of grass prairie. Enough of that sea of grass already. We get seriously tired of seeing Tracy ‘ride’ one of those fake horses on a sound stage while action pans jerkily out behind him on a screen. Hepburn and her elderly paramour ride on a stationary sleigh in Denver in the same way. MGM were very bad at this and it disfigured many of their Westerns.


So where did all that big budget go? It seems to have been spent on Ms. Hepburn’s gowns (a different one in each scene) and the Victorian fripperies in the house. 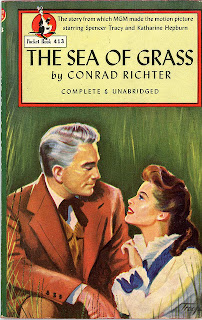 The Conrad Richter novel may have been good
but I'm not tempted to find out
The pace of the movie and whole look of it bring the word elephantine first to mind.


In some ways the theme was quite daring for 1947 – marital breakdown and separation, and an illegitimate son. But in others it is conventional and stifling. The act of procreation of this child is not even mentioned, never mind shown. After a while you just long for a verse or two of Let’s call the whole thing off on the soundtrack and end the movie after the first reel.


I think the worst crime of which this film is guilty is that it isn’t a Western at all but a cornball costume romance.


A Western would have highlighted the rancher/homesteader conflict; instead, this aspect is played down. Tracy makes an eloquent case for the ranchers in the courtroom scene, while the homesteader Sam Hall (Bell) is made unsympathetic, and acts stupidly, almost therefore deserving his fate. In any case the range war is skated over, to leave endless feet of film to devote to family interaction, sigh, and yet more bloody grass. Unsure whether to make a Western or a  melodrama, Kazan went for the latter but made a corny one.


Not my favorite film, I’m afraid.