It starts as an 1840s costume drama with the ladies in elegant dresses and the men in tail coats but as soon as Wayne appears in his usual garb (no concessions whatever to the 1840s) of red cavalry shirt, leather vest and gunbelt, exactly as he appeared in dozens of other Westerns set at any period you like, it goes out to ‘Texas’ where Duke is Ranger Jake Cutter and the action starts. The plot has ne’er-do-well New Orleans gambler Paul Regret (Stuart Whitman, who must have owned shares in Brylcreem), a part written with Cary Grant in mind, teaming up with Capt. Cutter to go undercover into Indian lands to thwart some dastardly Comancheros. In the book, Regret was the central character but for the film Cutter’s part had to be inflated, of course. Well, it was Duke. 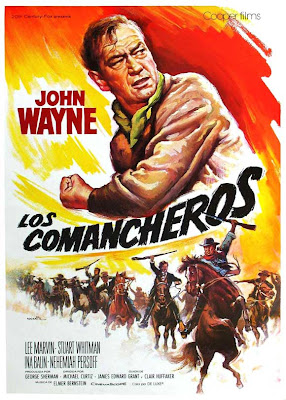 Don't you think Wayne looks like Harry Carey Sr? Duke would be honored, of course.
Perhaps it was deliberate.


Spanish Doña Pilar Graile (Ina Palin, in her first of two Westerns) flits from Mississippi river steamer to the Comancheros’ lair (it’s not clear why) and flirts with Regret and Cutter both. 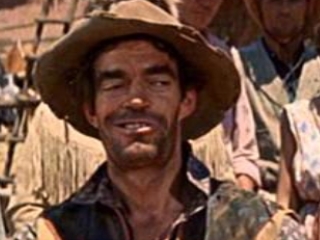 Horseface. Poor Jack, what indignities he had to suffer.
Jack Elam is in it (he is a Comanchero, natch, named Horseface – poor Jack) but only for the length of time it takes to blink. Ditto Edgar Buchanan as, obviously, an amusing judge of dubious probity, Thaddeus Jackson Breen. 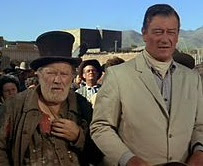 Judge Edgar (left)
It was the last film of veteran cowboy actor Guinn ‘Big Boy’ Williams, who died shortly after its completion. Curtiz’s younger brother Gabriel has a bit part. It was Bob Steele’s 176th appearance in a Western.


The best part is Lee Marvin as the partially-scalped Tully Crow. But most regrettably, Wayne is obliged to shoot him after only one reel, just when his character was getting interesting. 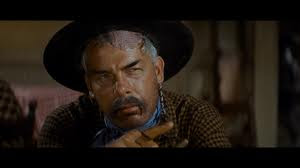 Tully Crow
They all have Winchester lever-action rifles and Colt Peacemaker six-shooters in the 1840s but never mind. The Comancheros are just like pirates in other films. There is a big, sub-Hondo battle with endless Indians being mown down as if at a fairground shooting gallery when the heroes win the prize. 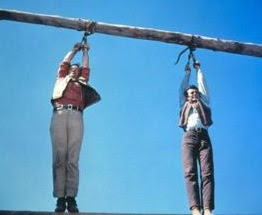 That's the trouble with these Comanchero camps.
They keep you hanging around so long.
The trouble is Michael Curtiz. It was his last film as director and he was hopeless. Don’t get me wrong, I loved Casablanca but he didn’t understand Westerns at all. He did 11 in all and the ones with Errol Flynn are quite fun - Dodge City and Virginia City, for example (though Santa Fe Trail isn’t much good). But they weren’t ‘proper’ Westerns, not really. You probably can’t do Francis of Assisi and The Comancheros in the same year and expect them both to work (though there could have been some interesting crossover… No, just being facetious). To be fair to the poor man, during much of the shooting, he was seriously ill (he died of cancer shortly after the film's release). First choice had been Budd Boetticher; now that would have changed everything.