A good mid-50s Western with a lot to recommend it

Dana Andrews started in Westerns (Lucky Cisco Kid and Kit Carson in 1940) and he was always solid and reliable, if possibly a tad dull. He always played the same type, but he did it well. He was Donald Martin in The Ox-Bow Incident. Probably his greatest achievement in the Western was as Logan Stuart in the excellent Canyon Passage, (1946) directed by Jacques Tourneur. In Smoke Signal he is tough, taciturn and misunderstood again. He is an army captain accused of treason and desertion. 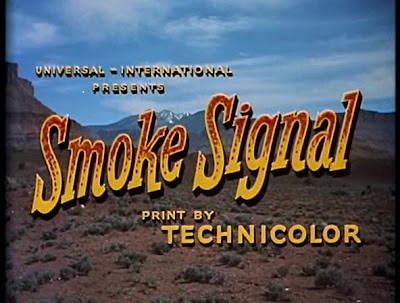 Universal-International, indeed. Didn't they think 'Universal' includes 'International'?
William Talman is the play-it-by-the-book captain who is charged with delivering Dana to the fort for court martial. But the pesky Utes attack and force the party to ride the rapids of the Colorado in frail small boats. So two classic themes of the Western combine as the characters brave both the wilderness and the Indians. 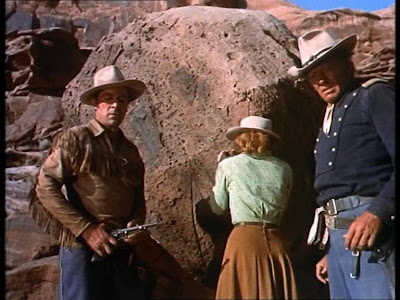 Personal conflict, Indians, savage nature. It's no picnic.
There’s a girl, of course: Piper Laurie worked for Universal for most of her career. She is the dead major’s daughter, visiting when the redskins attack. Her boyfriend is a rather Stewart Grangerish lieutenant played by Rex Reason. But he is a rotter. Slowly, she loses her Reason and comes round to Dana. 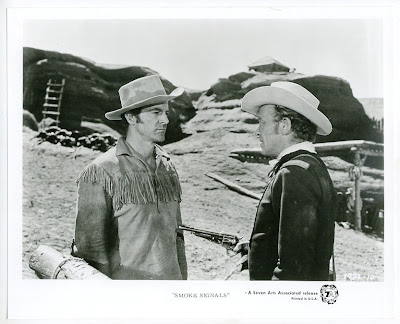 Cowardice? As if.
No great epic, this movie is nevertheless a tidy, well-acted Western. It benefits from some great locations (the Grand Canyon, photographed by Clifford Stine) and very good acting. The characters are strong and develop along the way thanks to quality writing by George W George and George F Slavin (that’s a lot of Georges). And the direction and editing are tight and professional. Jerry Hopper is not among the premier league of Western directors. This was his second (he’d done the weak Pony Express in 1953). He soon moved into TV Western shows (Wagon Train and Have Gun, Will Travel). But he does a good job here.
A lot of the boat scenes are staged, of course, shot in the studio with rushing water in back projection, but that was inevitable. There’s also a fair bit of real location shooting. 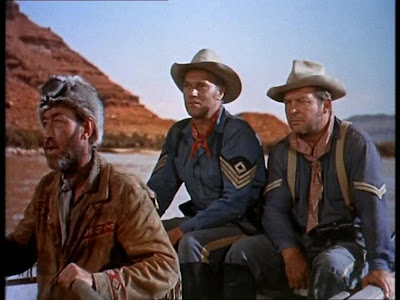 Sgt Robert J Wilke & Cpl Gordon Jones
with Arthur Hunnicutt-wannabe Douglas Spencer in coonskin cap
Douglas Spencer is very good as a trapper in coonskin cap and is distinctly Jay C Flippenish, or maybe he modeled himself on Arthur Hunnicutt. Good old Robert J Wilke is not a heavy, for once, but a decent sergeant. Milburn Stone, Doc from Gunsmoke, is also a sergeant.
I like this film. It’s a good mid-50s Western with a lot to recommend it. It’s no big-box-office Oscar winner or anything like that but don’t underrate it.
Posted by Jeff Arnold's West at 8:53 AM