Santa Fe Trail is a pretty noxious film. In some ways it’s not a Western at all: it’s too Eastern and too early. And at best it minimizes the evils of slavery, at worst even tries to excuse them. Of course it’s historical twaddle but I have never blamed Westerns for that. Most of them are, and we don’t watch cowboy films for historical truth. You want history? Read a history book. No, I have no problem with Hollywood playing fast and loose with the historical facts – unless it actively claims that what it is showing is factual. “This is the way it really happened”-type avowals were quite common, and that is irritating (and dishonest). But Sante Fe Trail doesn’t do that. 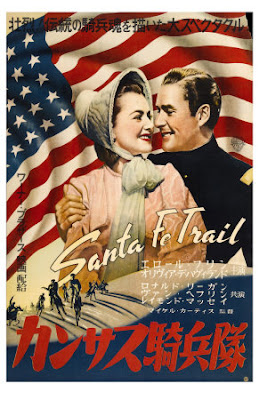 Nice poster
So we have The Jeb ‘n’ George show, with Custer (Ronald Reagan, bland as ever) as little more than the sidekick of JEB Stuart (Errol Flynn, dashing as ever). In fact, of course, Stuart and Custer weren’t even in the same class at West Point, Stuart graduating in 1854 and Custer in ’61. It might have been better to have had Philip Sheridan as Errol’s friend. At least they knew each other and were more like counterparts when the Civil War came, and the film would have worked just as well. Reagan would have been no more preposterous as Sheridan than as Custer. But I suppose Custer was more Hollywood.


Actually, of course, as you probably know, Errol Flynn graduated twice from West Point, once in 1940 as Jeb Stuart in this movie and once the year after as George Custer (in They Died With Their Boots On). And he fell for Olivia de Havilland both times. There’s quite a lot of similarity between the movies: Michael Curtiz and Raoul Walsh both directed boisterous, rollicking, blood-and-thunder tales of the military with gusto and humor. There is one big difference: Walsh was good at Westerns but Curtiz never ‘got it’ as far as oaters were concerned. He was wonderful at other genres, of course – just look at his track record – but none of the eleven Westerns he directed was really good. They had pzazz and they nipped right along but they just weren’t convincing as true Westerns. 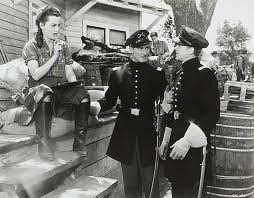 Olivia ponders
There’s a complex plot which I won’t recount here. I’m not quite sure why so many film reviews want to tell you the whole story in such great detail. Give a bit of the plot, yes, to whet the appetite, but what’s the point in describing what happens down to the last detail? You’ll see the film for that. Or not. 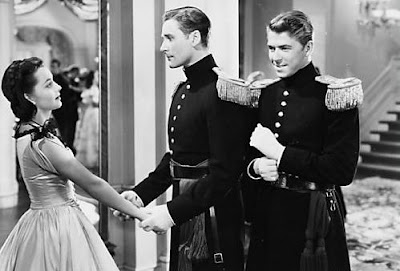 Olivia chooses
Suffice to say, then, that it’s about how Stuart, aided by Custer, foils John Brown’s attempt on the arsenal at Harper’s Ferry in 1859. Raymond Massey’s performance as a crazed Brown (“To the Devil with the Union!” he screams) is famous. He has a huge army (not the 20-odd men of history) at his disposal and throws them into the fight like a World War I general in the trenches. He thinks he is God and the script gives his part various lines of this kind: “We recognize no law but the law of God. You will do as I command.” The conflation of ‘God’ with ‘I’ is obvious. He gets his own Golgotha in the final reel (the scaffold on the hill is eerily shot by Sol Polito). Of course Massey chews the scenery, he usually did, but in this role he was entitled. Obliged, even. 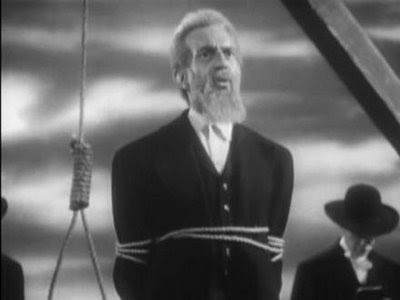 Shortly before moldering
Actually, the best actor by far in the movie is seventh-billed Van Heflin, as a passionate abolitionist expelled (by Robert E Lee) from West Point who joins up with Brown and provides the cause with military expertise. It is a subtle and powerful performance. Heflin had only appeared in one Western before, as a clergyman in The Outcasts of Poker Flat in 1937, and was to lead or co-star in Westerns from then on, with memorable performances, notably in Shane and 3:10 to Yuma. 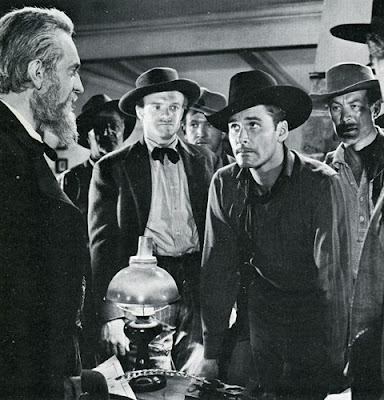 Ray Massey, Van Heflin, Errol Flynn, and (just) Ward Bond
Ward Bond is wasted in a micropart as an abolitionist volunteer from Illinois but is immediately written out. There’s comic relief from a pair of clowns, Alan Hale as Tex and Guinn ‘Big Boy’ Williams as Windy. They’re quite amusing, I guess. Good old Russell Simpson is there too.


Jefferson Davis plays a key role in it all – he is shown as Secretary of War (he wasn’t at that time in fact but never mind) and Jeff and Robert E Lee thwart the raid by sending in heroic Jeb – and the actor they got for Davis, Erville Alderson, looks astonishingly like the Confederate President. Custer gets to woo Jeff’s glamorous blonde daughter - who in historical reality was 4, but I must stop picking holes in the history of it. I can’t help it, you see. I studied American History at college. Anyway.


It’s no wonder really that Quentin Tarantino felt that we needed a corrective to how Westerns treated slavery (of course Django Unchained certainly did a bit of correcting…) Maybe Warners wanted the movie to sell well in the South, I don’t know, but they sure did a whitewash job. Stuart comes out with the astonishing claim that though of course slavery is morally wrong, Virginia is on the point of abolishing it and only needs a little more time. The slaves collected together by Brown are shown as stupid and they completely lack understanding of their own plight. Palmyra, Kansas, end of the underground slave railroad, is described as a “cancer”. Worse is a conversation Stuart has with a burly slave and his wife which goes as follows:


Jeb Stuart: What made you leave home?
Wife: Well, old John Brown said he was gonna give us freedom but shuckins, if this here Kansas is freedom then I ain’t got no use for it, no sir.
Husband: Me neither, I just wants to get back to Texas and set till kingdom come.


I suppose that Robert Buckner, author of the screenplay, wrote that Tolstoyan prose and Curtiz thought it good and left it in, and Flynn and the African-American actors were ready to say it.


Another odd thing about the movie is that it’s got nothing to do with Santa Fe. There seems to be a completely irrelevant plotline about building a railroad there along the Santa Fe Trail but I still don’t see what on earth it has to do with anything.


There are a couple of songs.


All in all, Santa Fe Trail has its qualities. It’s energetic and lively, and there’s a lot of gallopin’ and shootin’. There are a few funny lines in the script. De Havilland is decorative and amusing.  But the whole story leaves rather an unpleasant taste in the mouth, and furthermore, the film wasn’t even all that good on its own terms. Dodge City and Virginia City were more fun.