Purists will quibble as to whether this is a Western. But it certainly is, and a damned fine one too. And it is set in the West. Western Australia. How much further West can you go? 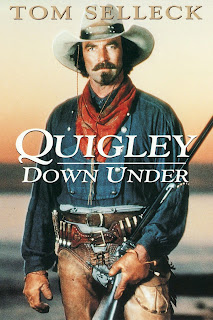 Howdy, mate
It has an outstandingly good screenplay, written by John Hill (his only Western). The film is tightly directed by Simon Wincer, experienced Australian director of TV shows who had worked on Lonesome Dove and was later to do a couple more excellent Tom Selleck Westerns, Crossfire Trail (2001) and Monte Walsh (2003). The photography of Northern Territory locations is by Mad Max-veteran Englishman David Eggby and is very fine. The original music by Kansas City-born Basil Poledouris is great fun, stirring and ‘Western’. He had also worked on the TV Lonesome Dove. So high quality all round. 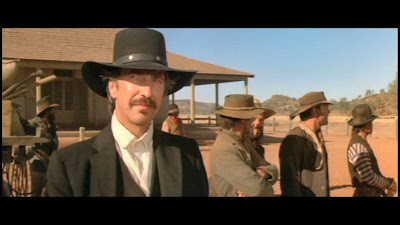 Like Kevin Costner, only bad
Best of all is the acting. Alan Rickman is dastardly as the sneering English station owner who thinks he is a quick-draw shootist in Dodge City. He’s the Sheriff of Nottingham in the Outback and his black frock coat costume is splendid. Chris Haywood is supercilious and arrogant as the English major (it’s quite an anti-British film). Rickman’s henchmen are suitably tough and murderous. The way Quigley declines Rickman’s offer of becoming a paid assassin of Aborigines (by throwing him out of his own house; through the window) is as deserved as it is memorable. 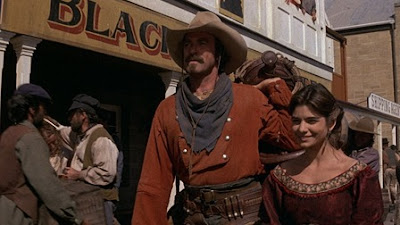 Roy and Cora
Laura San Giacomo is excellent as crazy, traumatised Cora who thinks Quigley is Roy, the husband who deserted her. She is beautiful and lively and gets the balance of sanity and oddness just right. And Tom Selleck (Orrin Sackett in 1979 and Mac Traven in The Shadow Riders, also for TV, in 1982, but Quigley was his first feature film Western) is superb as Matthew Quigley. He looks the part and has that perfect Western-hero laconic toughness with the hidden heart of marshmallow that all true cowboys have. His costume and equipment are almost as good as he is. The replica 1874 Sharps Long Range is a star on its own.

It’s a first class performance by Selleck. The movie was to have been Steve McQueen’s follow-up to The Hunter but of course he fell ill. McQueen would doubtless have done a good job, in a Tom Hornish way, but it is hard to imagine anyone doing it as well as Selleck.

Death at a thousand yards
Aborigines are, of course, the Indians and this is a very ‘pro-Indian’ film. The people are portrayed sympathetically and the Aborigine-hunting genocidal whites are quite as evilly racist as the Indian hunters of the American West. The Aborigines save Quigley and Cora when they are abandoned in the merciless desert, and the two cultures exchange bush and Western wisdom. Quigley then goes into action. So it’s a combined survival/revenge plot.

They had their Apaches or Comanches too
You could accuse Quigley of being a bit of a throwback and certainly it has a pretty conventional Western feel to it, but its setting and context are different enough to make it interesting and the look of the thing is excellent. Furthermore, even as an old-style Western, it is still very watchable on its own terms. In this way there were echoes of Silverado.

'Quigley Down Under' sounds a bit like a sequel, doesn't it? Like 'Quigley Rides Again' or something. Pity Selleck didn't make a prequel, about his days in Dodge. Would have been good.


Quigley Down Under is a first-class Western of the old school. It's no great work of art but it showed that in the 1990s a straight Western can still be entertaining, well-made and exciting to watch. Action heroes don't have to blow up helicopters and sleep with numerous glamorous women to impress. They can still be quiet and decent and tip their hats to ladies. But when they get riled, boy, badmen watch out.