Taming of the Western Shrew

Beware movies with exclamation points in their titles! They seem to want to make the story more amusing! Or dramatic! Probably because they were a bit weak in the first place! 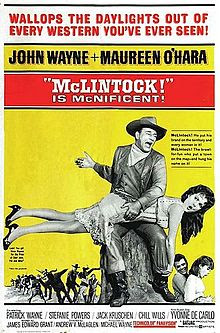 Hilarious, that spanking
This big box-office mid-Sixties hit was a sort of Taming of the Western Shrew and involved a lot of men spanking rebellious women and a famous brawl in which everyone, including Maureen O’Hara, ends up in a mud pool (a scene that apparently took a week to shoot). It says on the DVD cover that it is a “wild, raucous and hilarious Western comedy”. Yes, well. Personally, I think it’s junk. 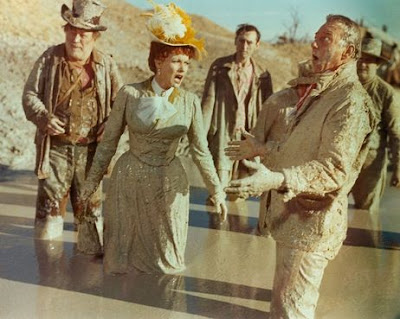 The star of the movie, Edgar Buchanan (left) with a couple of extras (center and right)
in the mudpool scene
John Wayne’s son Michael was a shrewd businessman and knew what makes a commercial success. It was Andrew V McLaglen’s biggest film to date as director. He was a pretty poor director of Westerns in my view, at best second-rate. He was son of John Ford stock company member Victor McLaglen and started on Gun the Man Down, a James Arness semi-TV spin-off which Wayne produced, in 1956. He then did a lot of TV work, notably 116 Have Gun, Will Travel episodes, 1957 - 63. He directed James Stewart in two of Stewart’s weakest Westerns, the soap-opera Shenandoah and the total turkey The Rare Breed, and Wayne used him quite a lot after McLintock!, for The Undefeated (1969), Chisum (1970) and Cahill, US Marshal (1973). To be fair, these last were commercial successes and many people remember Wayne from these late 60s and early 70s motion pictures.
The movie has its moments. It’s photographed by William Clothier in Arizona, for one thing. The supporting acting, for another: in particular, Chill Wills as Wayne’s long-suffering factotum, Strother Martin as the cowardly Indian agent, bald Hank Worden as ‘Curly’ and, especially, Edgar Buchanan as a dirty old trapper or miner. Good old Bob Steele is the train driver and the Indian chief Puma is played, obviously, by Australian Michael Pate, who cornered the market in Indian chiefs from Hondo on. 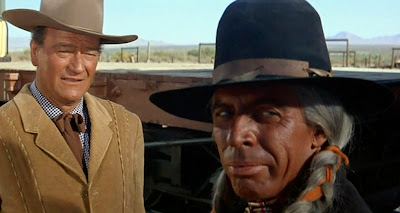 Duke and Chief Pate
The liberal and insipid Governor is called Humphrey, a 1960s dig at the Democrat Vice-President and Presidential candidate so despised by Wayne.
The snooty Maureen O’Hara and an aging Wayne do their Quiet Man act and there’s a lot of shouting. There’s none of the subtlety of the Wayne/O’Hara relationship of Rio Grande (the only time O’Hara came close to being any good). McLaglen isn’t Ford and the story doesn’t allow it. 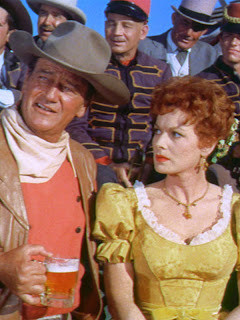 Rio Grande it ain't
Just when I was watching and thinking, ‘It could have been worse; there could have been songs,” they had one.
It’s certainly full of energy and the actors probably enjoyed it. But I don’t think we would be justly considered superior or patronizing if we called the humor broad. A lusty Western farce, perhaps. OK if you like that kind of thing.
One of the worst Wayne Westerns ever would be another way of looking at it!! 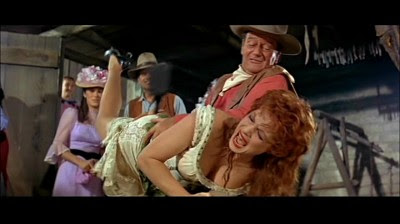