I don’t always go for comedy Westerns. I find the genre faintly sacrilegious.


But I do sometimes like them. There are honorable exceptions to be made. Buster Keaton's Go West of 1925 was truly wonderful and, of course, Blazing Saddles. Destry. Glenn Ford in The Sheepman. Among the acceptable ones is the Marx Brothers’ romp Go West which has all the usual ingredients: preposterous plot, musical interludes and gags galore. 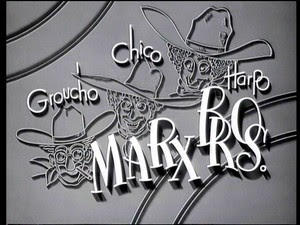 It’s all about Chico and Harpo getting the deed to a mine but being cheated out of their ownership by a crooked saloon keeper, and stealing it back. And so on. 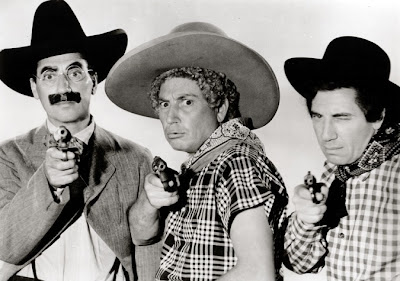 It’s nearly all filmed in the studio (including the Monument Valley bits!)


Great scenes are in the railroad ticket office and when they are drinking mint juleps in the saloon with the dancing girls. The best part, however, (which MGM nearly axed as being too expensive) is towards the end where the Marx Bros take over the train and race the baddies in a buggy galloping alongside. Harpo, Chico and Groucho have to break up the cars for wood to burn in the boiler. 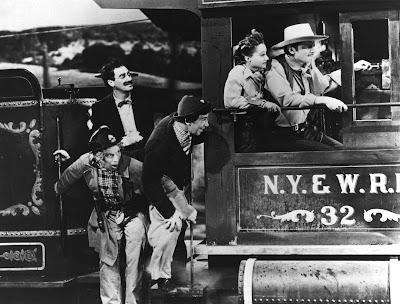 Harpo’s obligatory harp playing is provided in an Indian village where a loom is set up that happens to be strung tightly enough to play. Chico, of course, plays the saloon piano. Diana Lewis sings in her fine baritone.


There are a few quite daring bits for 1940: Groucho is ‘S. Quentin Quayle’ (San Quentin quail is of course jail bait). At one point he exclaims to a saloon girl, “Lulubelle, it's you! I didn't recognize you standing up”.


Though it’s not at all the funniest Marx Brothers film, it’s good for a chuckle and Harpo wears a twenty-gallon hat. We forgive them for stealing Buster Keaton’s 1925 title.


Say, didn't we meet at Monte Carlo the night you blew your brains out? 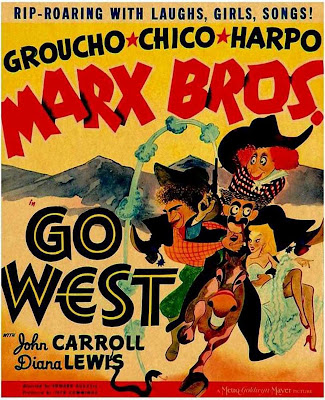