You could do worse

Cattle Drive is a children’s Western, really, or perhaps, rather, a boy’s one. The title says it all and it’s a straight tale of a cattle drive somewhere in the South-West but it’s the one about the spoilt brat (child actor Dean Stockwell, 16) who is taken in by a trail drive and grows up. A sort of Cowboy for kids. Or a Western Captains Courageous. 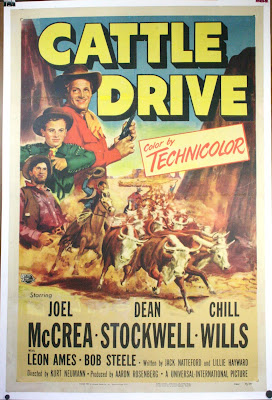 Actually, come to think of it now, I don't think there's a single woman in the cast. Probably, male audiences born around in the early 40s would have thought this an excellent movie.

There are two points in its favor: Joel McCrea and Chill Wills. The former (it was his sixteenth Western) is a tough but kind drover and the latter is the cranky camp cook. Together they teach the boy manners and to be a man.


It all has a heart-warming Disneyesque feel to it but manages to avoid cheap sentimentality. 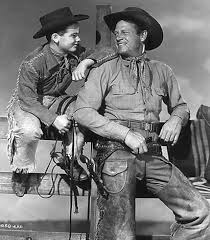 It was directed by Kurt Neumann. Who, you may say? Well, quite. But while it is true that Neumann directed nine eminently forgettable Westerns, including this one, we are forever in his debt because he did My Pal, The King in 1932, that quite splendid Tom Mix oater. Ah, Tom Mix, my hero. 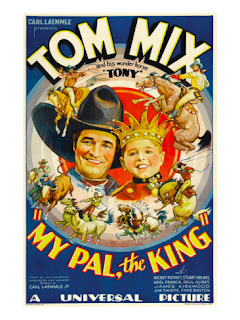 The first reel is used establishing the lad’s brattish credentials. You would cheerfully strangle him. Then he is abandoned accidentally by the train (his daddy owns the railroad) and is picked up in the desert by Joel who can somehow see the sand underneath the whipper-snapper exterior. 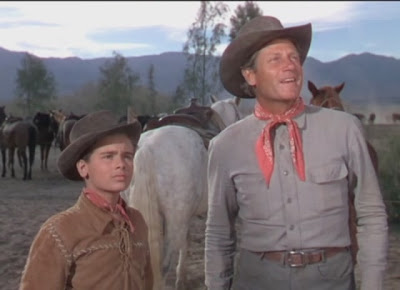 They chase a wild stallion together so Joel can set up his own horse ranch. The boy comes of age.

Howard Petrie (Bend of the River, Rage at Dawn) is the trail boss Cap, even if Joel really ramrods it, discreetly; he was to be trail boss in his own right seven years later, in Cattle Empire. Scar from The Searchers (Henry Brandon) is there too and Bob Steele is one of the punchers. Harry Carey Jr. was on the train.

There are some lovely shots of the Death Valley and Lone Pine locations by DP Maury Gertsman, with running shots of horses and cattle.


It’s all a bit predictable, I guess. And very far from Joel’s best Western. The ending tastes of saccharine. Still, it’s harmless, good clean fun and while you wouldn’t want to buy it on DVD and watch it twice a year (I mean Red River it ain’t), if you haven’t seen it and it comes on TV, you could do worse.


Anything with Joel and Chill in it can’t be lousy. 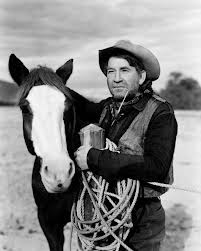