Everyone likes a Randolph Scott Western

This adaptation of the Ernest Haycox story Trail Town is a great little movie. It’s the good old ranchers vs. homesteaders plot as ruthless cattle barons and their allies in town are bested by decent homesteaders, the future of the US of A, aided by a bold town marshal (Randolph Scott, no less). 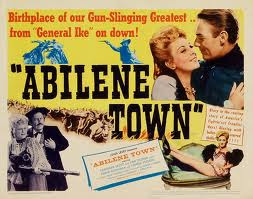 Come on, Randy, dump Dvorak and go for Rhonda

As black & white 1940s B-Westerns go, you won’t get better. Scott is an Earpish clean-up-the-town lawman who looks forward to the day when all the saloons, gambling joints and houses of pleasure in wicked Abilene will be closed down and replaced by stores and churches. Boring, huh.


The best actor in the movie, though, is Edgar Buchanan as Bravo Trimble, the cowardly county sheriff who contrives always to miss the action and any arrestin’ that needs to be done, leaving it to brave town marshal Randy. Bravo says he might go back to dentistry (a good joke when you know that Buchanan had been a dentist before becoming a Western actor) but is persuaded to campaign for re-election instead. He is a devotee of the card game fan-tan (which I always thought was Chinese roulette but what do I know?) 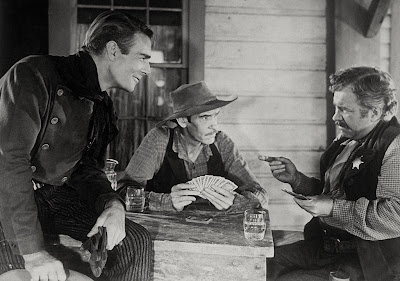 Bravo prefers to play Fan-Tan than actually arrest anyone
Some of the Harold Shumate script is a bit corny but Edwin L Marin’s direction is pacy and tight. He did eleven Westerns, many with Scott, as well as Tall in the Saddle with John Wayne. Abilene Town could be his very best.


There’s one thing very hard to understand, though: why on earth, when gorgeous Rhonda Fleming is in town and making eyes at Randy, he has to go for the second-rate Ann Dvorak. New Yorker Dvorak is truly awful in this, as indeed she was in the four other B-Westerns she made. Shoulda stuck to gangster moll roles. Oh well, no accounting for taste, I guess.


The excellent Lloyd Bridges is in it as a wholesome homesteader, still playing strapping-boy parts in his 30s, as he was to continue to do well into the 1950s. He was always very good in Westerns and we must do a Lloyd-o-rama career retrospective one day. Of course High Noon was the high noon of his Western career but he was also very good in several other oaters, notably Little Big Horn. 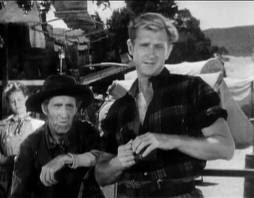 Lloyd Bridges, always excellent
Abilene Town was also the first Western of the capable Jack Lambert, as the heavy Jet Younger. I remember him from Bend of the River, Vera Cruz and any number of Western TV shows, always an excellent badman.

Randolph Scott is outstanding, full of enthusiasm and energy. It was one of his best roles of the 40s.

I suppose a 1946 movie would have something to say about end of conflict and reconciliation, or is that reading too much into it? Still, Abilene was Dwight D Eisenhower's home town and it was celebrating his homecoming. United Artists cashed in and the movie was a huge hit.


Archie Stout photography too. Abilene Town is a winner. Everyone likes a Randolph Scott Western and this one was out of the top drawer. 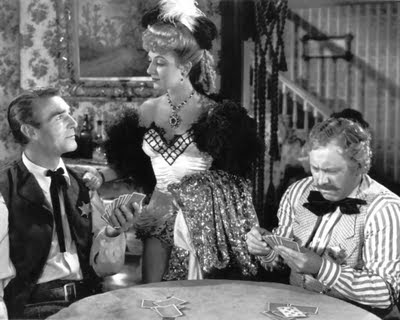 Marshal and sheriff with Abilene lady. Odd costume to wear at home.