Joseph H Lewis (1907 – 2000) was one of the greatest ever directors of gangster-noir B -pictures. Movies like Gun Crazy or The Big Combo (my favorite) have elevated this artisan into an auteuriste’s favorite. But he also directed film and TV Westerns from the late 1930s until the mid-60s. He started as an editor on Tom Mix and singing-cowboy oaters in the 1930s. He is probably best known as far as Westerns are concerned for his direction of 51 episodes of ABC’s The Rifleman between 1958 and 1963. 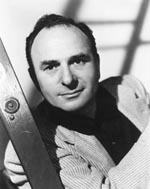 Joseph H Lewis
Lewis had worked successfully with Randolph Scott in 1955 on A Lawless Street (aka Marshal of Medicine Bend) and the following year came up with the excellent 7th Cavalry. 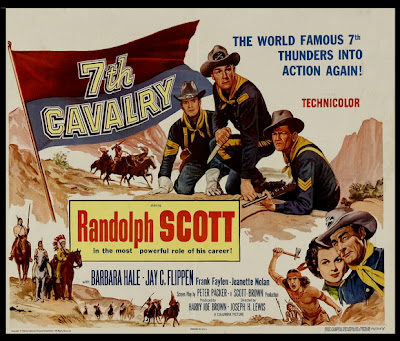 Big-budget B-Western
Rather like Lippert’s very good Little Big Horn of 1951, 7th Cavalry is only a Custer film tangentially. It starts immediately after Little Big Horn with Captain Benson of the Seventh Cavalry (Scott) returning to Fort Lincoln (one of those classic wooden Hollywood forts) with his bride-to-be Martha Kellogg (Barbara Hale, Rock Hudson’s love interest in Seminole), daughter of the big boss Colonel Kellogg (Russell Hicks, the prosecutor in The Return of Frank James), who does not approve. 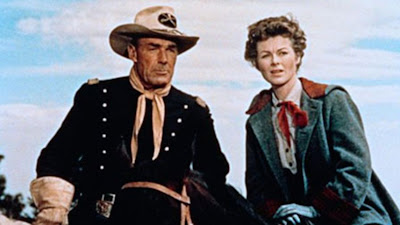 They find a deserted fort...
Benson finds the fort all but deserted (shades of Beau Geste) and is shocked by news of the death of Custer and his men. He finds himself accused of cowardice, having too conveniently quit the force just before the battle to go fetch his bride. Major Reno (Frank Wilcox, from several Errol Flynn Westerns) and Captain Benteen (Michael Pate, who had appeared in A Lawless Street as the gunslinger) explain away their behavior in an inquiry led by Colonel Kellogg, who confines Benson to quarters for protesting. Benson bravely rides above the slurs on his character and perseveres, volunteering for the suicide mission of recovering the corpses from the battlefield under the noses of the Sioux and Cheyenne.


He takes with him, dirty dozen-style, a detail of the dregs of the Army, drunks and no-goods. Leading drunks and no-goods are Denver Pyle and Leo Gordon, classic Western heavies, of course. Sergeant Jay C Flippen is there too. Also Frank Faylen (Blood on the Moon, Whispering Smith, The Nevadan), though he is decent really. 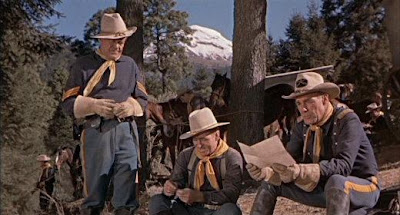 On a suicide mission
The real hero, though, is Harry Carey Jr., as Corporal Morrison. Dobe's supreme riding skills are put to good use as he gallops Custer’s thoroughbred horse Dandy with a skimpy English racing saddle, carrying crucial news that will save Benson’s reputation. I will say no more. My lips are sealed. Zippo.


It’s nicely photographed in Technicolor by Ray Rennahan with Durango, Mexico standing in for the Dakotas. Some of the scenes are wonderful. The Mischa Bakaleinikoff music is appropriately martial and goes all Indian whenever a Sioux appears, you know how they do.


I like the ending, which manages the tricky feat of dealing with magic yet not being hokey or a cop-out. It’s a tense climax.

It was based on a story by Glendon Swarthout, author of The Shootist, They Came to Cordura and The Homesman.


7th Cavalry is a superior Western, quite a lot better than the preceding A Lawless Street, which was a pretty conventional marshal/gunfighter affair. It deals interestingly with themes of cowardice and bravery, honor and betrayal (as did They Came to Cordura). And Scott, despite being a bit anno domini for a junior officer, is outstanding. It is one of his strongest roles. The film has its weaknesses: it is too talky (death for a Western) and there is an unquestioning acceptance of the heroism and military skill of Custer. Director Lewis said to Peter Bogdanovich:

I became terribly confused because I found out what a horrible man Colonel Custer was. Jiminy cricket! This was really a maniac -  despicable man. And that truly interfered with my work, because I couldn't tell a true story. And I couldn't make a hero out of this man because of what I knew about him, and you had to in the film. 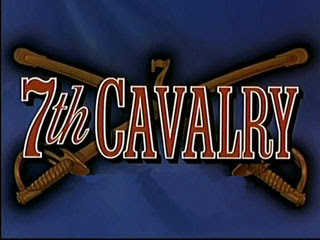 A Custer picture without Custer

But Burt Kennedy has said:

When the material was good [Randolph Scott] was excellent. 7th Cavalry, which he made for Columbia, wasn't too hot, but he believed in everything he did, so it worked.

Yes, and it's definitely worth a watch.