A Western that doesn't really work

These Thousand Hills has rather a slushy title and sentimental title song (to the tune of the hymn) and these do it no favors at all. I prefer the tougher French title Duel dans la boue, duel in the mud, which in fact is more representative in a way because the two protagonists slug it out publicly in the muddy street at the climax of the film and the central character is dragged through the mud metaphorically too. 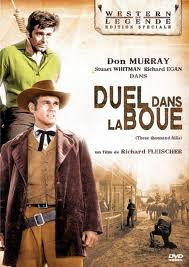 Fistfight in the mud. A better title.


Don Murray was certainly not in the front rank of Western stars and came slightly too late to the genre to rival the greats. This was his second oater, after From Hell to Texas, his first and best. He did the last Alan Ladd Western, One Foot in Hell, a weak picture, really, and afterwards, well, not much. But in These Thousand Hills he is perfectly adequate.

Don Murray, his second Western. Too decent to be the ruthless land baron


He plays a young cowboy (he was 30) with ambitions, determined to expiate the failure of his father and own a successful ranch. He is more than just determined, he is increasingly ruthless. In the original novel, by The Big Sky author AB Guthrie Jr, he teeters on the edge of madness but Murray plays it more feet-on-the-ground and in fact underplays the ruthlessness. His dumping of the kindly prostitute who first funds him with her savings in favor of the posher daughter of someone who will help his career appears, in the film, perfectly reasonable. 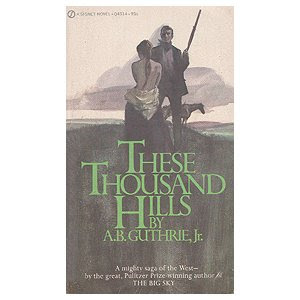 The book
The Alfred Hayes screenplay from the Guthrie novel and the direction by Richard Fleischer are implausible and rather clumsy. Murray’s character ends up the soul of reason and decency, and anyway his grasping ambition was mild compared with most of the Manifest Destiny ranchers, so it’s difficult to know what all the fuss is about. Really, the story descends to a personal one of his betrayal of the saloon gal and how he comes round to doing the decent thing. Kind of. 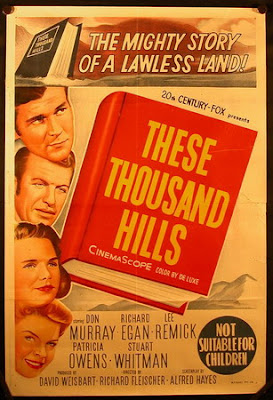 Not suitable for children, it says. Well, it would be these days.


Fleischer had done Bandido, one of those movies in which an American goes to revolutionary Mexico, and he later did The Spikes Gang in which an old rogue takes a gang of teenage robbers under his wing. He had also done a rodeo picture, Arena. But he was far from a Western specialist (even if I do actually quite like both Bandido and Spikes, mainly because of their leads, Robert Mitchum and Lee Marvin, respectively).


Lee Remick is the whore (tastefully alluded to, of course) and isn’t bad, though perhaps a little too refined. Richard Egan (Kansas Raiders, Love Me Tender) is the bad guy Jehu, a sneering gambler who fights dirty. I rather liked Stuart Whitman (Cimarron Strip, but also The Man from the Alamo, Rio Conchos, The Comancheros) as the simple, almost simple-minded cowhand Tom Ping, a Virginian Steve-like character who goes bad but is actually the decent one. He comes to a Steve-like end, I’m sorry to say. Those Wyoming and Montana types sure liked hanging people on their own initiative.

Lee, with a heart of gold


In the end the film doesn’t really work. Perhaps it was too difficult to make a 1950s Western with the hero an outright exploitative swine who treads on former friends in order to climb to wealth and the Senate. Because that’s what the story is really about. And Don Murray was just too nice to do that.