Huge, epic, but a bit of a clunker

Among the Western things I’m not overly keen on are covered-wagon stories, Andrew V McLaglen Westerns and pre-Civil War tales. All of these are present in The Way West, so it isn’t going to get too many plaudits from this blog. Huge, epic
On the other hand, I love William H Clothier photography, Robert Mitchum (when he’s not on auto-pilot and even sometimes when he is) and Jack Elam, and this movie has those too.


It seems to have been an attempt to do for pioneer settlers what The Big Sky had done for mountain men and trappers, namely to produce the ‘definitive’ movie. (AB Guthrie Jr. had, of course, written the novel that was adapted for RKO's The Big Sky in 1952 and Kirk Douglas had starred in that.) Given The Way West's predecessors such as The Covered Wagon, The Big Trail and so on, that was quite an ask.


The project was scuppered from the start, really, by the attempt to do Peyton Place on the Prairie, and though the AB Guthrie Jr. novel probably was 'the' covered-wagon story, the highly complex soap-opera plot and Ben Maddow/Mitchell Lindemann adaptation doomed the film version to box-office and critical perdition despite its huge budget.


Harold Hecht, the producer, and Andrew McLaglen, the director, had lunch with Robert Mitchum , who had agreed to take part (the fishing was good in Oregon) and asked him which role he would like. He gave his famous ‘Baby, I don’t care’ answer and was assigned the part of the scout. It was ideal casting though and Mitchum in his buckskins was the best thing about the movie. He was to play a man indifferent to his fate. Perfect. Apparently Bob had a fishing rod in the grass and cast his line between takes. 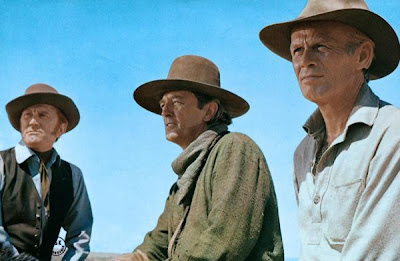 Driven senator, reluctant scout, angry farmer: Douglas, Mitchum, Widmark
Richard Widmark took the role of the farmer, populist challenger for the leadership. Is it me or does he shout too much in this one?

Kirk Douglas histrionically played the Bligh-like boss of the wagon train and apparently tried to be the boss of the film crew too. He was as competitive and driven as always. Assistant director Terry Morse (quoted in Lee Server’s 2001 biography of Robert Mitchum) said, “Kirk was arrogant and rude to everybody. That’s the kind of guy he was, and nobody really liked Kirk. He wanted everything his way. He was not a pleasant person to be around.” 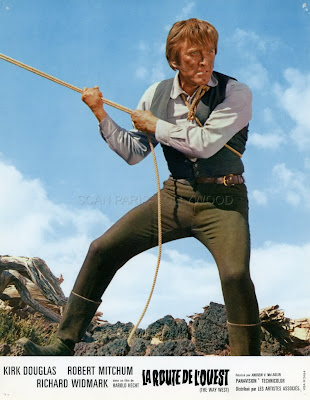 British-born McLaglen, Victor McLaglen’s son, was a kind of Ford/Wayne protégé, and he obviously tried for a Fordian movie here. He had first directed Gun the Man Down, a kind of TV-spin off movie with James Arness in 1956, and had gone on to do Gunsmoke, Rawhide and Have Gun - Will Travel episodes on TV.  McLintock! in 1963 was one of Wayne’s worst Westerns (well, it would be, it had an exclamation point in the title), then he did the quite dreadful The Rare Breed, with an under-par James Stewart, a dismally bad Maureen O’Hara and an even worse Brian Keith. Two later commercial Wayne vehicles, Chisum and Cahill US Marshal were about the best Westerns McLaglen did but really he was a slightly second-rate Western director.

Wide screen
The Bronislau Kaper music is appropriately grandiloquent and swelling but rather tiresome, and the theme song is really grim. The widescreen Clothier photography of the Oregon locations is splendid and one of the highlights of the movie, and there is very little interior or sound-stage stuff. Some of the activity is pretty impressive. Rivers were forded and wagons were lowered from cliff tops (all wagon-train movies loved that bit). McLaglen must have been one hell of an organizer. Jack Elam, who played the preacher, said, “Physically, [the movie] was as tough as it could possibly be. Working on the cliffs and in the sand and all that shit. On top of a mountain, the top of a ski-run that was bone dry in summer. Everybody had to take a ski-lift to the top … You’re up there, hundreds of feet up, nothing but rocks to fall on. Goddam scary … So the whole picture was one tough son of a gun.”


Elam added, “We worked so hard on The Way West, it was a shame it got such mixed reviews and kind of died somewhere on the vine. At the time we were shooting it, we really thought we were making a damn great picture.” But they were trying to make a 1950s Western in 1967 and it didn't work. If you look at the other movies that came out in 1967, this one was an anachronism.

Variety said it was "washed out in scripting, direction and pacing" while The New York Times called it "hackneyed hash". Huge, epic, nice to look at, it was nevertheless a bit of a clunker. The movie is (marginally) shorter than the trek down The Oregon Trail would have been and certainly less dangerous, but probably just as dreary.