Westerns starring Randolph Scott and produced by his partnership with Harry Joe Brown were often excellent, tight little grippers which were nicely photographed, had good writing and pacey plots. A very good example of this is their third collaboration, The Nevadan, aka The Man from Nevada. 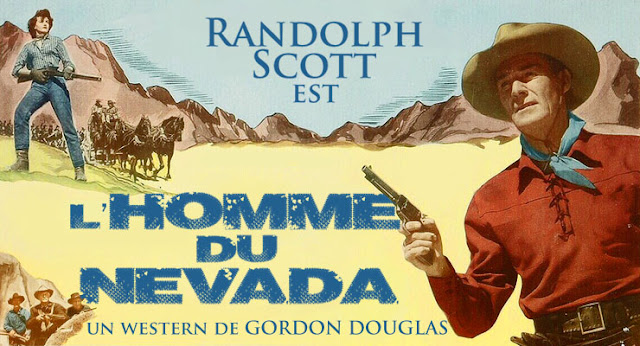 This one was brilliantly directed by Gordon Douglas, in his short stay at Columbia (he moved to Warners straight after). Douglas could do some very ho-hum stuff and churned out some stodgy oaters but he was also capable of very good work. One thinks of the flamboyant actioner Rio Conchos, the interesting post-spaghetti Barquero, the first class Clint Walker picture, Fort Dobbs. and in particular the excellent The Fiend who Walked the West. The Nevadan is in this category.

Douglas at the helm


It had the honor of being the first Western to come out in 1950, thus ushering in the greatest decade of the genre, its golden age. 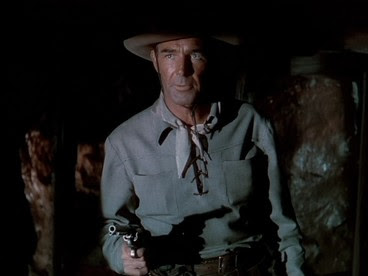 There are two particularly rewarding aspects of this movie. One is the pacing: it moves along at a cracking speed and your interest never flags. Yes, the plot is a bit formulaic – this was no original art work – but just watch how much of the back-story is established in the few scenes under the opening titles. When the movie starts we are already well down the trail. After that, it’s all action and plot development and we are carried along at the gallop.


The second aspect is the look of the thing. Though set in Nevada and Nevada is often mentioned in the script, it was in fact shot in California, but it sure looks like Nevada. Desert, rocks and pine trees: it’s pure Western terrain. It is most admirably photographed in those special Cinecolor tints by Charles Lawton Jr, one of the greats, who had done The Walking Hills with Randy and was to go on to do some superb work in later Westerns, notably Jubal, other Scott-Brown oaters such as The Tall T, Ride Lonesome and Comanche Station, and, in particular, the 1957 luminous black & white 3:10 to Yuma. A lovely color print of The Nevadan is available. 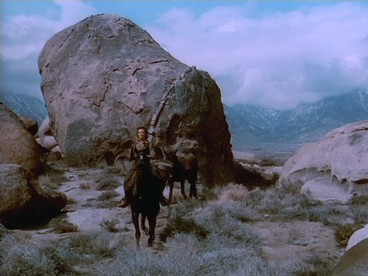 As for the story, I won’t give you here a summary of the complex plot. You don’t need that. Just be assured that the story is going to take you along with it. You won’t be bored!


The acting is first class. Scott himself was at the peak of his career. He had first appeared in Westerns in 1932 (having, as a true Virginian, coached Gary Cooper in accents for The Virginian in 1929, or so it is said anyway). By the late 30s he was taking leading or second-lead roles in major pictures, such as in Fox’s Jesse James in 1939 and in a similar part in 1940 in Universal’s When the Daltons Rode. Columbia’s The Walking Hills in 1949, directed by John Sturges, made him one of the best-known Western stars and all through the 1950s he was to appear in one quality actioner after another, notably the seven he did with Budd Boetticher. They were lower budget pictures, yes, but they were all highly professional and are still a good watch today; he finished of course with the magnificent Sam Peckinpah film Ride the High Country with Joel McCrea in 1962. A really great Western career. 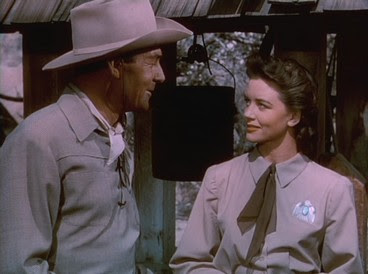 Anyway, I have wandered off the trail a bit in my fandom meanderings. I was talking about The Nevadan. Co-starring is Forrest Tucker, doing a first-rate job, as the rogue after the gold. He improved no end of B and TV Westerns from 1940 through 1987.

Female lead is the lovely Dorothy Malone (a stunningly beautiful woman and a fine actress), here as an independent young woman who goes her own way. She cares for crippled horses. Aahh, how nice. But it isn't a slushy romantic film at all. Her dad is the villain Galt, who owns the town and wants everything else, played solidly by George Macready (the unblinking blond badman of Coroner Creek two years before, also in The Doolins of Oklahoma, later in Vera Cruz).

I would also mention Frank Faylen and Jeff Corey as the squabbling brothers who love each other really, excellent performances. Charles Kemper (good in Yellow Sky) is amusing as the denture-sculpting, wise sheriff. Jock Mahoney has a bit part as Sandy but in fact did most of the stunt work as Scott’s double. 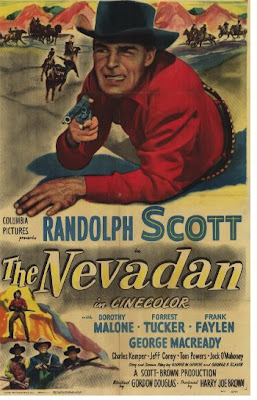 There’s a breathless climax with a fist-fight in a collapsing mine and a five-way (later a six-way) shoot-out in the rocks. Great stuff!


The Nevadan is very good. You won’t do better if you are looking for a good-looking, exciting, pacey Western.