A Randolph Scott/Harry Joe Brown Western but rather routine

H Bruce Humberstone directed quite a lot of low-grade movies such as Charlie Chan tales in the 1930s or Tarzan pics in the 50s. He only did three Westerns, all B ones, and Ten Wanted Men was his first. It is probably his best. 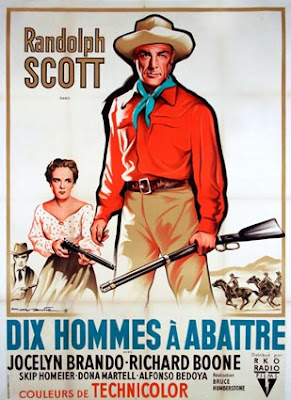 Nice French poster
It was filmed at Old Tucson so at least we get some Arizona scenery, shot by Wilfred Cline in nice color (the currently available print is very good). There are also a lot of stock Western actors: Dennis Weaver is the (rather feeble) young sheriff, Lee van Cleef is (inevitably) a gunman, in an excellent gray John Wayne shirt, and Denver Pyle is another. Lee and Denver both aren’t as fast as they think they are. Leo Gordon does a good job, as always, as lead heavy. He comes to blows with Randy in the final reel (or their doubles do anyway) and the result is rather crushing. 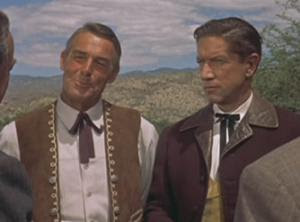 Rich Rancher Randy and Rancid Rival Richard
The principals are Randolph Scott, as rich rancher John Stewart, and a very young looking Richard Boone as his enemy Wick Campbell (maybe they were carrying on an old Scottish clan feud). Randy is good, obviously, yet I thought just a tad unconvincing when he was describing to his (rather English sounding) brother how he had built the Arizona ranch by fighting off Indians and killing outlaws. When a Chisum-Wayne says that, you believe it, but Randy seems too, well, gentlemanly to go round hanging outlaws or shooting Apaches. Lester Matthews, playing the English-sounding brother, was born in Nottingham, England, so that may explain it. I suppose they wanted an Easterner to be Randy’s newly-arrived lawyer bro, and you don’t get more Eastern than Nottingham.
Boone was already shaping up to be an excellent bad guy. He, Bruce Dern and Robert Ryan are probably my favorite badmen of all. They are tough, and believably bad. Excellent performance (of a rather routine script).

Scott liked Boone and used him again in The Tall T the following year. There was a rumor that Randy was considered for the TV role of Paladin but turned it down, not wanting the commitment and risk of typecasting, and Boone got it. 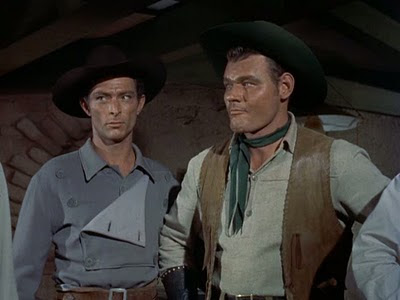 Gunman Lee (dig the shirt) and lead heavy Leo, genuinely tough
Actually the writing (a Kenneth Gamet screenplay from a story credited to Irving Ravetch and Harrier Frank Jr.) is one of the problems. It’s pretty plodding and formulaic. The characters do not develop; they are just standard Western good or bad guys.
The direction, too, is less than sparkling. The pace is uneven. There is intercut stock footage of cattle (from the much better Man in the Saddle, I think). It’s all fairly predictable. 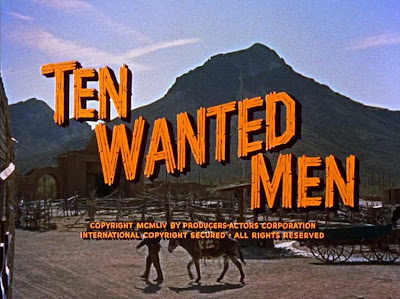 I only counted seven. Whatever.
Marlon Brando’s older sister Jocelyn is the girl Randy has been too busy empire-building to woo but the crisis at the end leads him to realize her qualities and to understand that he loved her all along. Doh.
The young challenger to Gregory Peck in The Gunfighter, Skip Homeier, came to corner the market in sneering punk-kid roles. Here, he has graduated to be a sneering nephew of Scott’s who basically causes all the trouble by romancing Boone’s girl. He’s a goody but still quite sneery-punky. He was to sneer-punk again in The Tall T.
I’m not quite sure why it’s called Ten Wanted Men. When the posse of bad guys go after Randy’s lawyer brother and shoot him, Tunstall-like in his buggy, they number seven (that mystical Western figure).

There's some dynamite-tossing which Howard Hawks may have seen before making Rio Bravo.
A bit of obscure Western lore for you: Franklyn Farnum has an uncredited micropart. Farnum, no relation to Dustin and William, was nevertheless in an untold number of silent Westerns and B 1930s talkies. Ten Wanted Men was honored by his (semi-)presence. I hope the rest of the cast was properly respectful. He took bit parts in any number of later Westerns.
There’s a Lincoln County War-type siege at the end with much shooting and many heroics. A rather corny double-wedding finishes it all off. It’s not bad – well, it is a Randolph Scott/Harry Joe Brown Western after all – but it’s one of the least of them and all a bit routine.