From the slushy name onwards, this film is very bad.


The claim on the DVD box that it is “The best Western since Tombstone” isn’t just cheeky, it’s impertinent. And way wrong. Are they seriously suggesting that this rubbish is better than, say, Open Range (2003) or even The Assassination of Jesse James by the Coward Robert Ford (2007)? 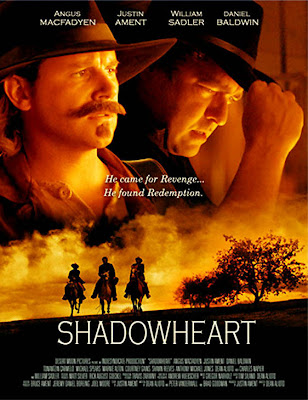 
Whatever were the producers thinking, financing a Western as corny and sickly as this in the 21st century? Have we learned nothing?


And it caters to the lowest and worst of American thinking, and harks back to the worst of the Western. Personal revenge with a firearm is perfectly acceptable. You just make the villain horrible enough and then it’s alright for the ‘hero’ (or someone else on the hero's behalf, that's a good cop out) to shoot bullets into him.


The production values are abysmal. Everyone is clearly wearing costume; no one looks even remotely convincing in the clothes. The actors have glowing skin and teeth bright enough to illuminate Los Angeles for a year.  The diction of most of them is 21st century Californian youth-speak. The acting is second class and occasionally (as in the case of Angus Macfadyen, the lead heavy) laughably over the top. It is his only Western and we must earnestly hope that he does not get the taste for them. 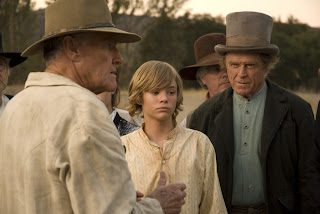 
The writing is probably the worst part. It is ‘credited’ to Dean Alioto, the director, and two accomplices, Peter Vanderwall and Brad Goodman. It is trite, clichéd, anachronisitc, clumsy and boring. No cast could make these lines sound convincing or even interesting. The second-rate actors employed certainly couldn’t.


The film can’t really decide whether to be a sickly-sweet sentimental love story gone tragically wrong or a traditional revenge drama that we’ve seen a thousand times (bad man kills hero’s daddy so hero grows up and gets his revenge, yawn). So it decides to try both at the same time. And fails.


The direction is turgid to the point of catalepsy. Was the director even present on the set?


I can’t think of a single thing good about this film. Photography, sets, music? Nope. The music is especially vomitworthy. The ending? Pathetic New Agey goo.


I have seen some bad Westerns in my time. Exploitative junk, failed comedies, ultra-low-budget spaghettis, sub-feminist women gunfighter tales, all sorts of very low grade stuff. But they all had something. This movie doesn’t. I have given it one revolver because it is a Western and they all get one, for having made a Western. I only once gave zero and this appalling dross isn’t quite that bad. So it gets one. But it was a struggle. I strongly advise you not to be seduced into buying the DVD or even watching it on TV. Any Western since Tombstone was better than this.