But whose side are we on?

If nothing else, Posse is an interesting Western and Kirk Douglas, whatever his faults as a Western actor (and in this case director) did at least make different movies, with something to say. 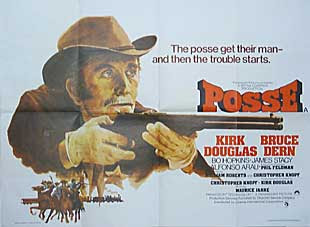 Very bad poster art...
Briefly, Howard Nightingale, a politically ambitious Texas lawman (Douglas), campaigns on an aggressive law-and-order ticket and with his professional posse runs down and captures a gang of badmen led by Bruce Dern. So far, so successful for Nightingale. But the bandit leader escapes and imprisons Nightingale in his own cuffs. He suborns the posse, men whom Douglas has cynically used, to join him. Now the boot is on the other foot…


This movie was made in the mid-70s, with Watergate on everyone’s mind and politics stinking with the whiff of dishonesty. It was a good idea: a political Western as a parable of today’s ills. Lawman with political ambitions
The trouble is, it’s all mixed up. We are invited to sneer at cynical politician Douglas – and to make it worse he is backed by the railroad, so he must be evil– and sympathize with a vicious robber and killer. This was never going to work. Furthermore, the notion that Nightingale’s whole political career will stand or fall on this one case seems rather implausible, to say the least. And why is Dern keener on exposing Douglas’s insincerity than on escaping? It just doesn’t ring true somehow.


Still, Kirk is rather dashing in his mustache and lawman’s badge and of course Bruce Dern is excellent. He always was. If you wanted a real badman in your Western movie, then it was down to whether you could get Richard Boone, Robert Ryan or Bruce Dern. Dern started in TV Westerns in the early 60s, and his first movie role was as Hammond in The War Wagon (also with Douglas). He was splendidly bad as one of the Quint boys in Will Penny and as Miller in Hang ‘em High. In the former, young actor Jon Gries, 11, said he was genuinely afraid of Dern on the set and it made him act realistically! Dern was also the truly nasty lead villain in The Cowboys, of course, and even shot John Wayne. Yes, a splendid badman (and no wonder Mr. Tarantino is still using him). And this is by no means his worst performance. 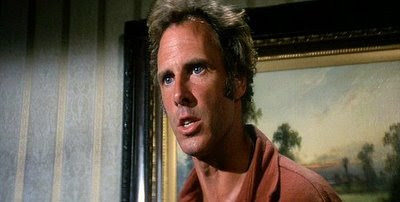 A great badman: Bruce Dern
Posse was written by Christopher Knopf, who did TV work, and William Roberts, who had helped write The Sheepman and The Magnificent Seven. The Fred J Koenekamp photography of Old Tucson locations is nice. The Maurice Jarre music isn’t very good though.


There’s a Matthew Brady-type photographer, and the politician Douglas sure knows the value of the posed picture.


There’s no shortage of action and the movie rattles along (though with the odd sag). It’s a pity the ‘message’ is a bit mixed up. But at least it’s different. 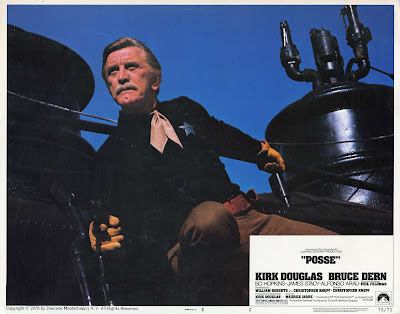