Open Range was released in 2003 and can thus claim to be the centenary Western.

The Great Train Robbery, a thrilling 11-minute silent Western, came out in 1903. Americans and the world immediately took the genre to their hearts and a century of glorious Western movies followed. Some people, poor deluded fools, have suggested that after 100 years, the cowboy film has said all it can say. Yet not only are Westerns still being made in the twenty-first century, good ones are coming out. The Western still appeals in some way, to American and global audiences, and clearly still has something to say.

And while certain recent Westerns are different, original, new takes on an old genre, such as The Assassination of Jesse James by the Coward Robert Ford or Django Unchained, other twenty-first century offerings such as Appaloosa, the 2007 3:10 to Yuma, the 2010 True Grit or Open Range are pretty straight-down-the-line oaters of the old school.

With screenplay by Craig Stoper from a novel by Lauran Paine, Open Range is a classic story of justice and revenge. Yes, it verges on the cliché and some of the language is almost corny ("Men are gonna get killed here today, Sue, and I'm gonna kill them") but after more than a century of Westerns there’s only so much new that cowboy dialogue can say. Most of the time the script avoids platitudes and corn, and gets right on with it.

We are in “The West” (actually filmed in Alberta, like many modern Westerns), 1882. The open range is gradually being fenced in and freegrazers like Boss Spearman (Robert Duvall) and Charley Waite (Kevin Costner) are a dying breed. They arrive at Harmonville, a town dominated by bullying Irish rancher Baxter (Michael Gambon) who uses his hired thugs to run them off. Baxter's’s men kill their cook, leave their boy at death’s door and, worst of all, it seems, shoot their dog, Tig. That really does it. It’s vengeance time. 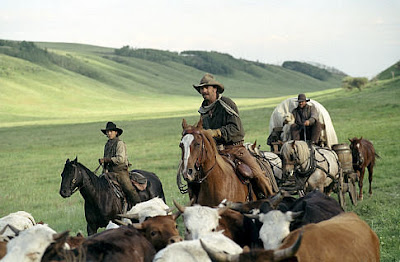 
This is a solid, old-fashioned, Western with grit and it culminates in one of the best shoot-outs you'll see anywhere. Duvall is superb and this film, Lonesome Dove and Broken Trail make an admirable trilogy of trail-driving pictures. In all of them he is an older, wiser hombre and he knows he is an anachronism. His days are already over. But like all true Western heroes he is fundamentally decent and will not stand for arrogance or dictatorial behavior. “It sticks in my craw,” he says. "Cows is one thing but one man telling another man where he can go in this country is something else." That’s right, you tell 'em, Bob. And you know the bad guys have it coming when he says to the doctor that he will “drink to good health for them that have it coming to them.” That does not apply to Mr. Gambon and his men… 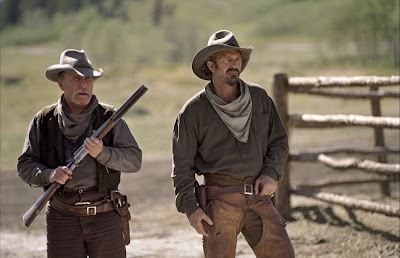 
Kevin Costner is his sidekick, ex-gunman, bristly, sometimes ornery but like his boss decent deep down. I think Costner 95% convinces in Westerns: there is that modern-day, PC eco-man for 5% but we can forgive him that. Costner and Duvall both look the part, that’s for sure. Duvall matured into one of the greatest ever Western actors. From about Joe Kidd onwards (1972), he was stunning.


Their crew is made up of big Mose (Abraham Benrubi), slightly simple, loyal to the death, and Button (Diego Luna), a Mexican boy they picked up in a Texas town throwing out garbage in a saloon. They don’t have many cattle. It’s a far cry from Red River or most cattle-drive movies of the 40s and 50s. But they do have the biggest star, the dog Tig, who is perfectly adorable. Once the baddies have killed Tig, no punishment is too bad for them. 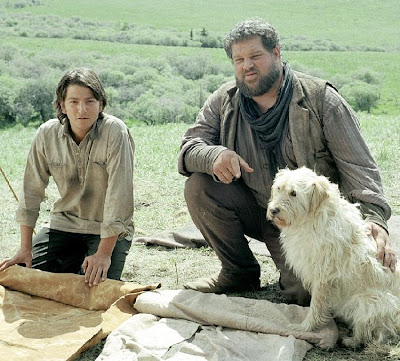 
Although his movies are often overlong, Costner's direction of this one is reasonably pacey (they made substantial cuts) and only flags occasionally. Visually the film is high quality. J Michael Muro photographed it, traditionally, usually in natural light (there is no hand-held, cinéma vérité filming going on or anything avant-garde or trendy) and Gae Buckley was production designer. Like most modern (feature) Westerns, the look is perfect. The Michael Kamen music has a memorable theme that you hum as you leave the movie theater and although the movie does get a bit soppy in the romantic parts, Westerns have to have some love interest, I suppose, sigh. 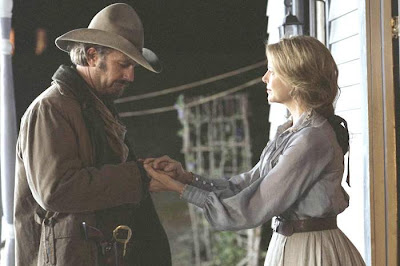 
Actually, the romance between Charley and the doc's sis Sue is rather sweetly handled, in a deliberate, almost staid Victorian way, politely, over tea, he clumsy and awkward and she demure but determined. Annette Bening is Sue. She is so good, and another advantage modern Westerns have is that the women are not just whores or angels any more, they are real people, tough as the West had made them, who stand on their own feet.


All the support acting is high class, from Britisher Gambon as the vicious Oirish rancher to the magnificent Michael Jeter, intensely enjoyable as ‘old’ Percy, the stableman who befriends the freegrazers (and who was actually 21 years younger than Duvall…). It's the sort of part Arthur Hunnicutt would have taken in the old days, or maybe Edgar Buchanan. James Russo as the bought-and-paid-for marshal also does a fine job. 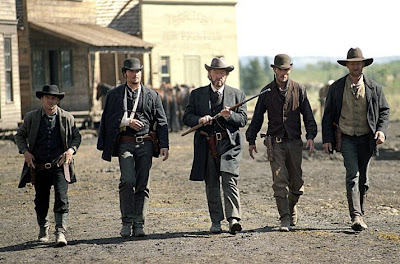 Baxter and his gunmen: the showdown


This is a deliberately ‘straight’ Western and can be compared to Costner’s others (Silverado, Dances with Wolves and Wyatt Earp) in the sense that all of them are linear narratives in a known Western tradition with little that is revisionist, self-questioning or post-modern about them. The heroes act according to their (Western) principles, even at the risk of their lives. But that’s what many people want. And why not?


Open Range (no relation to the 1927 silent based on the Zane Grey) is a fine Western. Full marks to director/producer/actor Costner and all concerned.