Not the best Randolph Scott Western but good fun anyway 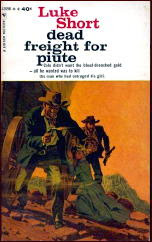 Great little novel
Dead Freight for Piute is a great Luke Short novel. Like all Short, this 1939 tale is gritty, hard and without a wasted word. The ferocious and deadly competition between freighting lines is not a subject often addressed in Westerns but it was authentic and deserved attention. 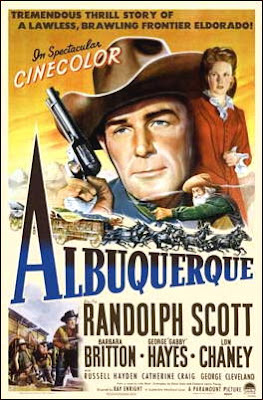 Gabby at his best
Sadly, however, the film version of it, as Albuquerque, wasn’t of the same quality, despite its starring Randolph Scott. Both writing (Gene Lewis and Clarence Upson Young) and direction (Ray Enright) leave quite a lot to be desired. The main weaknesses are the implausibility of it and the phony staging. The glamorous female spy (second-billed Barbara Britton; she appeared in a lot of Scott oaters) worms her way into the confidence of the good guys in eight seconds flat. The film builds up to the perilous descent of the ore wagons down a lethal, almost impassable road, but the vertical drop beside the trail is clearly a painted backdrop. First-time driver Randy overcomes a sabotaged brake and brings the wagon down safely. The fight between Randy and villain Lon Chaney is clumsily staged with very obvious stunt doubles. They even ‘ride’ those fake horses on screen, something that I can never remember Randolph Scott doing. So it’s pretty poor direction, despite a substantial Paramount budget. 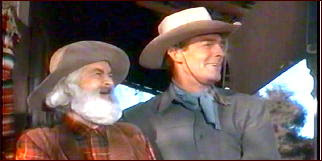 The Walter Brennan of the B-Western (left)
Having said that, it’s a whole lot of fun. Gabby Hayes, in a part not in the book, does his ornery ole timer act (he was the Walter Brennan of B-Westerns). Randy wears a great shirt. He gets to do some comic shtick, not entirely successfully. Russell Simpson, my hero, is the splendidly named Abner Huggins. The bad guys are really bad. The boss badman (George Cleveland), Randy’s uncle, is in a wheelchair and is splendidly villainous. He has Napoleonic ambitions to take over the whole West, rather like David Brian in Fort Worth a couple of years later. His main heavy is Lon Chaney, who doesn’t take the cigarette butt out of his mouth even when fighting, and whose face is several times shown in ultra-close up, like an embryonic spaghetti western. There’s a last-reel shoot ‘em up in Main Street, though it's a bit perfunctory.

Close up of Lon
There’s a nice print. Cinecolor was a kind of cheap Technicolor but I like it. It gives an almost pastel shade and highlights the reds and oranges (such as Randy's kerchief). Fred Jackman Jr. did some attractive photography of the Sedona, AZ locations. He’d done Gunfighters with Scott the year before. 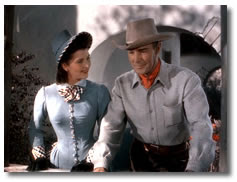 Guess who gets the girl? Nice Cinecolor.
The movie was not a major hit in 1948, the year of great Westerns Fort Apache, The Treasure of the Sierra Madre and Red River as well as a host of excellent and/or successful pictures such as Yellow Sky, Blood on the Moon, The Man from Colorado, Rachel and the Stranger, Four Faces West, Coroner Creek (also a Luke Short story with Scott; three 1948 oaters were Luke Short tales), Whispering Smith – the list goes on. Nor has it got much attention since. But it made money. One of the Paramount producers said, "We made it for $728,000 and grossed over two million in the US and Canada alone." And it’s by no means a clunker. Scott is very good and the basic Luke Short story saves it from banality.


90 minutes well spent, pardners. But you'll have a better time with the book. 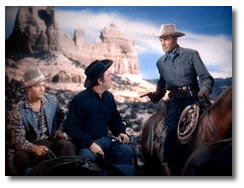