The Western career of Steve McQueen 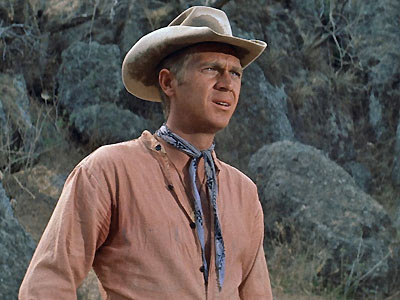 Vin
Steve McQueen is often thought of as a Western actor and was inducted into the Hall of Great Western Performers in April 2007, yet he only made three Western movies – four if you count Junior Bonner.


His being thought of as a Western character may be because he became such a big star (probably the hottest property of the 60s) and his tough-guy image made him a natural in Westerns – he just looked right.


He was quite good in oaters, in fact, judging by the few parts he played, although perhaps not right up there in the top rank. It could be that he came too late to Westerns: by the 1960s it was a case of ‘the glory hath departed’. He missed the mighty Western era of the 1950s.


The three movies were of course The Magnificent Seven, Nevada Smith and Tom Horn.


The Magnificent Seven (United Artists, 1960) - click the link for a full review - is one of the liveliest and most fun Westerns of all time, wonderfully written and directed as well as acted. As you know, McQueen played Yul Brynner’s sidekick Vin. He had thirsted for the role of Chico and was annoyed that it went to the young German Horst Buchholz, who ended up disliking him intensely, and McQueen is well known for having hogged the camera with every bit of actor’s ‘business’ known to man. But he’s ineffably cool in it. He certainly has some great lines and scenes, notably his first when he rides shotgun on the hearse. With the camera on Brynner as he said his lines, McQueen beside him kept fiddling with his hat, looking up at the sun, anything to catch the eye away from Yul. Brynner told him that if he continued that, he (Brynner) would simply take off his hat. That’d soon stop people looking at McQueen. 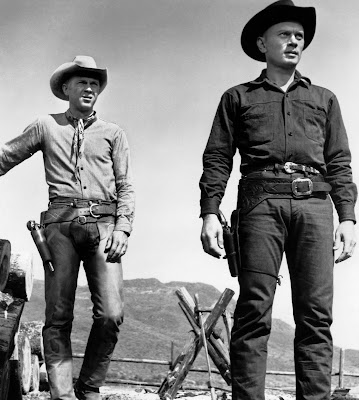 
The Magnificent Seven, er, shot Steve McQueen to fame and marked him out immediately as a Western actor of note. It is in some ways surprising that he didn’t do more in the genre, although of course Westerns were becoming less frequent and McQueen’s tough-guy persona could appear instead driving race cars or as a hard-bitten cop (or in the case of Bullitt, both). Steve was all for doing the sequel Return of the Seven but it is said that Brynner vetoed the idea.


Nevada Smith (Paramount, 1966), which was produced and directed by Henry Hathaway and photographed by the great Lucien Ballard, ought to have been better than it was. A straight revenge Western, it suffers from implausibility and wooden acting. McQueen was 35 and blond yet trying to play a sixteen-year-old half-breed Kiowa. The movie has a ponderous plot. It was written by John Michael Hayes “based on the character in” the extraordinarily popular Harold Robbins novel (not to say potboiler) The Carpetbaggers. Brian Keith is solid if uninspiring as the traveling gunsmith who befriends McQueen and teaches him to shoot after Karl Malden, Arthur Kennedy and Martin Landau have brutally killed the boy’s parents. But the rest of the acting is pretty dire. Of course, the cast are not helped by the corny dialogue. The worst is Karl Malden, never a good Western actor, who hams it up embarrassingly badly. He is last seen screaming hysterically at the top of his voice, a typical mode for Malden. 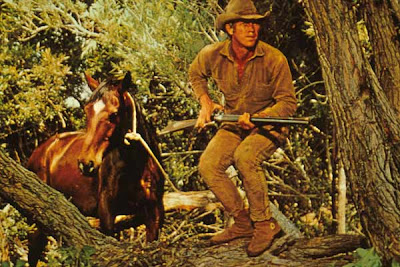 
There are two women, a Kiowa saloon gal and a dusky Louisiana maid (Janet Margolin and Suzanne Pleshette, respectively), but they are only there to help McQueen find the next villain. In the case of la Margolin, it is difficult to judge in which role she is less convincing, as Kiowa or saloon gal. Steve doesn’t seem to show much interest in the girls anyway. Raf Vallone is an Italian priest who gives McQueen an Old Testament to show him the error of vengeance and lead him to peace ‘n’ love. That's going to help. None of these people convince. At least Strother Martin and LQ Jones have (uncredited) microscopic bit parts so you can look forward to spotting them (Strother in the tub). 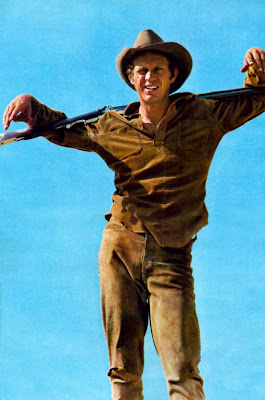 
Alan Ladd, star of The Carpetbaggers, the movie, two years before, was scheduled to have played in this prequel but his early death meant that McQueen got the part. McQueen did a better job than Ladd would probably have done because Ladd was 17 years older even than McQueen, so it is difficult to see how he would have played the ‘kid’ part. Furthermore, at least McQueen comes across as tough, which Ladd always had difficulty doing in Westerns. But the character is one-dimensional anyway and doesn’t develop beyond a cursory attempt to ‘age’ him. There’s little tension. We are never in doubt that McQueen will get the bad guys. He duly does. It’s pretty average as a Western and was certainly the worst of the three that McQueen did. (There was, by the way, a TV version directed by Gordon Douglas in 1975 with Cliff Potts as Smith and Lorne Greene as Jonas Cord.)


Lastly, at the end of McQueen’s career and very nearly at the end of his life, came Tom Horn (Warner Bros, 1980). Again, we reviewed this picture at some length when looking at Tom Horn in fact and fiction, so click the link to read more. Here, we’ll just say that in the movie poor McQueen looked terribly ill and in fact by the end of the film was coughing blood and was diagnosed with a cancer associated with asbestos removal (he had taken part in replacing asbestos-based insulation in a ship's engine room during his time in the US Marines and this may have been the cause). 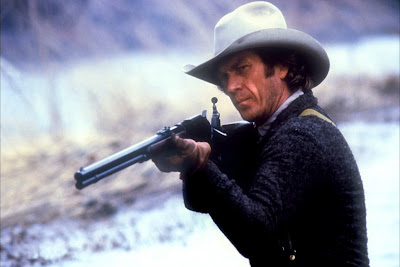 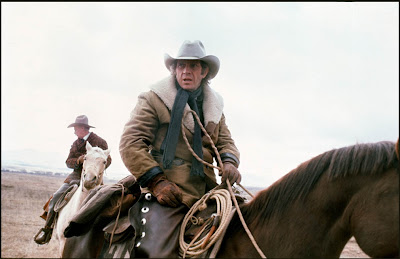 In my view, it was his best Western role. He was rather moving and more poignant and understated than before. This could be, partly, because we know now as we watch it that he was soon to die but I don’t think it’s only that. He portrays Horn’s stoic resolve very well. He refuses to justify himself: a true Western hero does not stoop to do that. He behaves as he thinks fit and if other people judge him harshly for it, so be it. There’s a nobility there. I think Tom Horn is an underrated film often panned by the critics but it is in fact a fine example of the late Western. A lot of that is down to William Wiard’s direction and John A Alsonso’s photography but much is also due to Steve McQueen’s very fine performance. 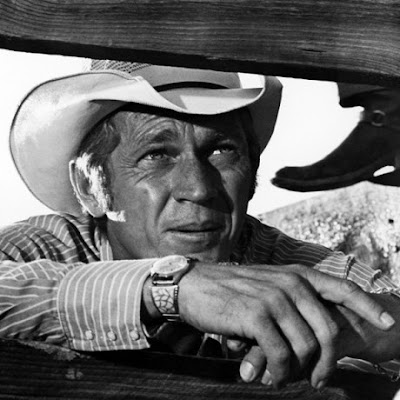 
We should certainly mention Junior Bonner (ABC/CRC, 1972), Sam Peckinpah’s film. Though some would not regard this as a Western (it’s a modern rodeo picture), for me it is Western enough to rate inclusion. Western or not, it was one of McQueen’s finest performances. He is outstanding as the ‘motel cowboy’ on the slide down from the peak of his bronc-busting career and he suits Peckinpah’s elegiac ‘end-of-the-West’ theme perfectly.

However, for many people, Steve McQueen’s Western standing is down not to any of the big-screen movies above but to his appearance in no fewer than 94 episodes of the black & white TV series Wanted: Dead or Alive. This CBS Western ran for three seasons from 1958 to 1961 and was enormously popular. McQueen was of course Josh Randall, the bounty hunter, in it. On TV, bounty hunters couldn't be ruthless exploiters; they had to be tough but fair and deep-down decent and that was how McQueen played it. The number of times he donated his bounty to worthy widows and children, it’s a wonder he made a living at all. Wanted was in fact a spin-off of an episode of Trackdown, a 1957/59 series in which McQueen appeared, twice (The Bounty Hunters and The Brothers) in 1958. Randall was famously armed with ‘the mare’s leg’ Winchester 1892 model cut-down rifle, which he could draw and fire with amazing speed. The series was actually well written, directed and acted and, if inevitably rather formulaic, is still quite good viewing today. French TV ran them all again last year in a long Wanted-athon and they were enjoyable. There is in fact now a colorized version but I haven’t seen that. 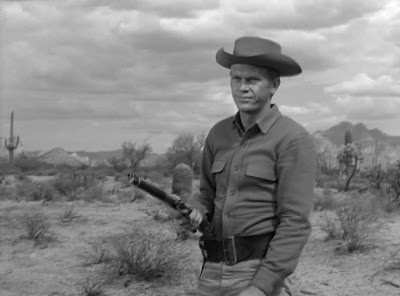 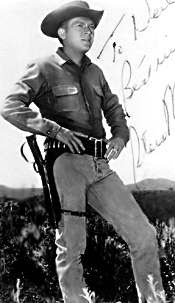 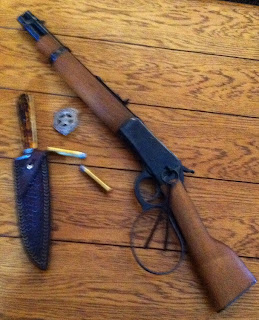 
McQueen’s first ever Western, aged 28, was also in a TV series. Earlier in 1958 he had been billed second, after Dale Robertson, as the Texas gunfighter Bill Longley in a Tales of Wells Fargo story, Bill Longley.


In the ‘what-might-have-been’ department, it’s quite interesting that Steve McQueen was considered first to play with Paul Newman in Butch Cassidy and the Sundance Kid (Fox, 1969) but withdrew, typically, because of questions of who would get the top billing. One wonders, of course, how different his Sundance would have been from Redford’s. Not that either Redford or McQueen would have made it a good Western, though, because it was weighed down too much by the poor writing and direction.

McQueen as Sundance?
Also interesting is that that very good Australian Western Quigley Down Under (MGM, 1990) was written for McQueen. Now, Tom Selleck was absolutely excellent in that but once you know that it was designed as a McQueen vehicle, you can see Steve in the outback in chaps with that Tom Horn-ish long gun. 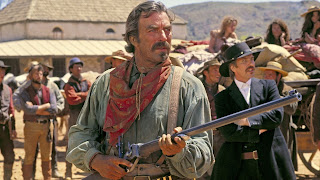 
He also turned down Marlon Brando’s role in The Missouri Breaks (United Artists, 1976). That was a great pity. He would have been steely, whereas Brando was camp. 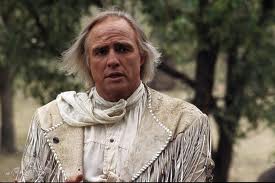 If only we'd had McQueen instead of Brando...


Before his death, McQueen optioned two Walter Hill screenplays: one was the non-Western The Driver and the other was The Last Gun, a Western which so far remains unfilmed.


Steve McQueen died in Mexico in December 1980, aged only 50. He hadn’t starred in many Westerns but he had done enough to be thought of as one of the leading Western actors of his time. 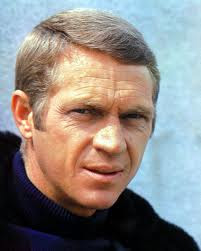