Based (loosely) on Frank Harris's My Reminiscences as a Cowboy, Glenn Ford's fourteenth Western, and Delmer Daves's eighth (depending on your definition of Western), benefits from an excellent performance by Ford as a leathery, domineering cattle baron, playing opposite Jack Lemmon as Harris, the Chicago hotel clerk who inveigles his way onto Ford’s cattle drive as a partner and has to learn the business the hard way. 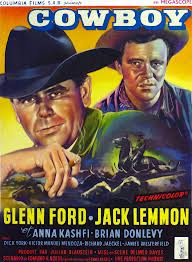 They go down to Mexico to buy cattle and then drive the herd to the railhead, presumably in Kansas.


The actual cattle drive doesn't begin until an hour of the movie has passed but after the obvious stuff about a tenderfoot in the West (sore backside and so forth) there is an interesting development of character as Lemmon in fact becomes Ford: at first Ford is too hard and lacks human feeling while Lemmon is compassionate. Gradually the positions change and Lemmon learns only too well. He becomes a heartless son of a bitch (excuse my French) and Ford is the one with the human decency. 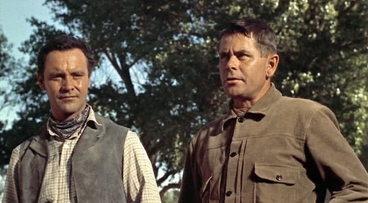 Harris has, of course, his beautiful women to woo (though he loses the rich señorita whose father disapproves of him).


There’s some nice New Mexico scenery and some very good photography (Charles Lawton Jr., who had worked with Ford the year before in black & white on 3:10 to Yuma). All Daves's Westerns, good and indifferent, are visually superb. This one is in a rich-hued Technicolor that is still brilliant today.


The supporting actors are fairly average and Brian Donlevy is out of place (he often was in Westerns, I fear) as a retired gunfighting marshal trying to get away from killing. His fate, incidentally, is interesting: he hangs himself, and Daves always had a morbid fascination with death by hanging - witness his movie with Gary Cooper later the same year, as well as grisly lynching or near-lynching scenes elsewhere.

Anna Kashfi (Mrs. Marlon Brando) as the señorita doesn’t really come across as a real person, more of a Mexican doll, but maybe that was Harris at work. Nice to see Vaughan Taylor as the Chicago hotel manager though. He's usually a pusillanimous townsman in Westerns but he's kinda got promoted here.

Richard Jaeckel (Charlie Prince the year before) has a short part as a trailhand who causes Strother Martin to be fatally bitten by a rattler during horseplay but Strother doesn't even get credited, which seems a bit harsh when you've been bitten to death by a snake. His character isn't named in the picture, either, and this underlines the callousness of the cowboys (they are an unpleasant bunch really). Trail boss Ford's eulogy is less than glowing - in fact it's heartless. "In the long run I don't think it would have made any difference," he says. Similarly, in Mexico, when Harris is trying to whip up support for a rescue mission of cowboy Charlie (he has got into deep water in a cantina by wooing a Mexican maid) the drovers can't really be bothered to go save Charlie. As well as selfish and callous, at other moments they are shown as boorish, racist and sexist. This was perhaps Daves's quest for the 'realist' Western. 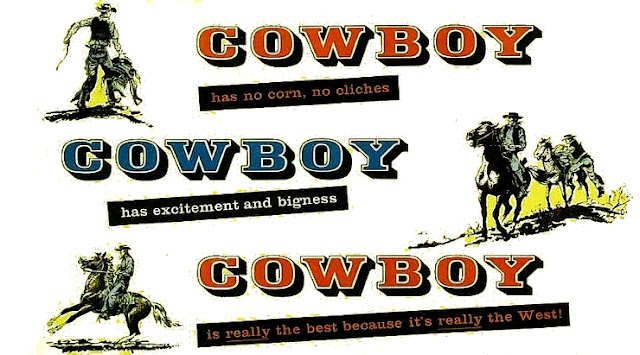 This is no Red River and there have been plenty of better cattle drive movies, even ‘small’ ones like Vengeance Valley. It’s light and it’s fun. But it’s a Delmer Daves picture again (the third Western he had done with Glenn Ford, after Jubal and 3:10 to Yuma) so it has realism and quality, if not to the same degree as the other two. It's a lightweight, essentially. It could be that there was simply not enough story to stand up to a 90-minute movie. Much of the film seems to be a series of loosely-linked sketches.

I would say that Daves did not have an overtly recognizable style in the way that John Ford or Sam Peckinpah did, or Anthony Mann. After the first three recognizably coherent 'Indian' Westerns (Broken Arrow, Drum Beat and White Feather), each movie is different, perhaps because he was always experimenting and trying out new ideas. You might not know, unless you had been told, that this movie was directed by the same guy as 3:10, although Daves certainly does have themes and ideas common to all his flicks.

We end up where we started (Daves liked symmetrical films), in a plush Chicago hotel, but this time Lemmon is in the tub next to Ford swigging whiskey and shootin' holes in the wall with a six-gun. 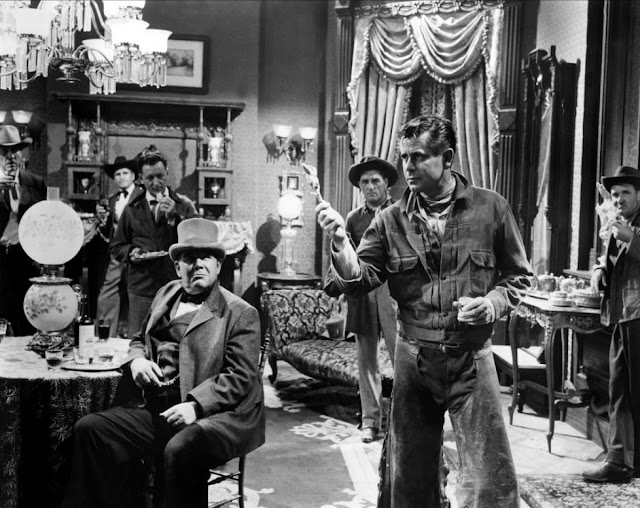 This was Delmer Daves's penultimate Western (he was to make The Hanging Tree with Gary Cooper later the same year). It's good; I wouldn't want you to think otherwise. But it's far from his best.