Branded was the Western directorial debut of cinematographer Rudolph Maté, who went on to direct competently a good number of Westerns, notably The Violent Men and The Far Horizons. In this first one he used cameraman Charles B Lang Jr. (“Ah, Charlie Lang, one of the great ones,” as James Coburn used to say) and together they produced a visually superb Western with Alan Ladd. 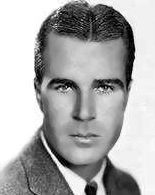 Lang
Filmed in Arizona (which has to do duty for Texas and Mexico but that’s alright) and also in Kanab, Utah, it glows. Shots are framed beautifully and there is some impressive long-focus work. There are the inevitable indoor sound-stage scenes, regrettably, especially at the beginning, but you forgive that for the truly ‘Western’ setting in most of the film. 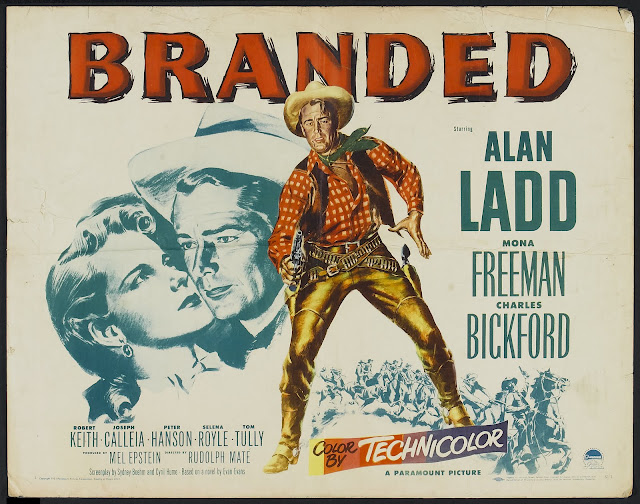 The plot is the good old one (William S Hart did it several times; Gary Cooper did it in Texas) about a man passing himself off as the son of a rich rancher, falling for his ‘sister’ and then ‘fessing up because he was decent really. This version adds a trip to Mexico to fetch back the real son, adopted by a bandit chief Rubriz (Joseph Calleia, an actor who was never less than excellent) who can’t bear to see the boy go. It’s melodramatic and intricate but it certainly carries you along. It was by pulpmeister ‘Evan Evans’ (aka Max Brand). By the way, Joseph Calleia was to be the best thing about a later Ladd Western, The Iron Mistress. 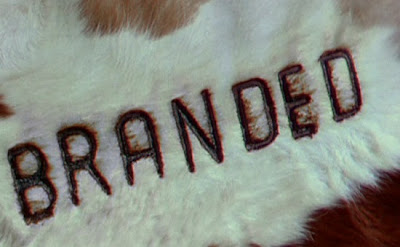 Supporting acting is solid if uninspired. Charles Bickford and Selena Royle are the parents and do it decently. Mona Freeman is the sis and is attractive and spirited. Robert Keith is the satisfactorily loathsome villain who kidnapped the real son all those years ago and who must obviously therefore come to a sticky end. Milburn Stone, Doc from Gunsmoke, is in it. The music (Roy Webb) is nice too.


So we have a great Western on our hands, right? 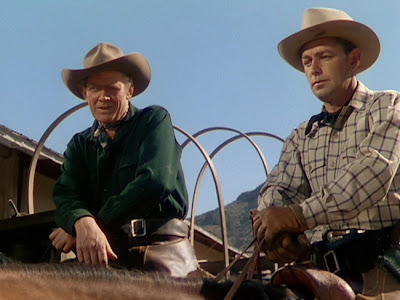 Wrong. Reason why? Alan Ladd. Ladd, with his Beverley Hills tan and coiffed locks, just doesn’t cut it as a gritty Westerner, as he was to prove three years later by being fatally miscast as Shane. Here, duded up in Two-Gun Tex rig and with his Stetson pushed back on his head to show his slicked blond hair, he just does not convince. He never did. Western heroes are not suave and silky smooth. I’m sure he was a nice fellow and I don’t want to be unkind. Doubtless he was excellent in non-Westerns. But, sorry, he lets this movie down.


Where he is good, however, is in the emotional relationships. An unconvincing gunslinger and outlaw, Choya (Ladd) becomes increasingly uncomfortable living the lie. He is benefiting from the parental love and trust that he himself obviously never had, but to which, now, he is not entitled. "All my life, I've been a snake,” he says. “I've lived by my wits. I've gotten what I've wanted any way I wanted it. Just lately I've been wondering just for once if I couldn't do something straight, do something a little decent." Ladd is extremely subtle in these scenes and as Choya’s despicable conduct looks as though it will make him inherit the whole huge ranch, his emotional struggle is palpable and very well played. 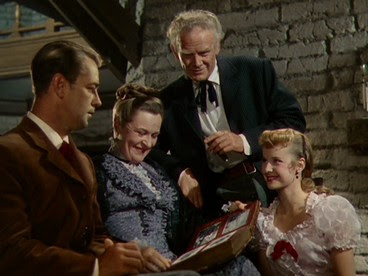 It’s the action he couldn’t do. In the very opening scene he is a gunfighter, holed up in a store he’s robbing. With the storekeeper as hostage, he breaks out and runs for the hills. It doesn’t convince one bit. 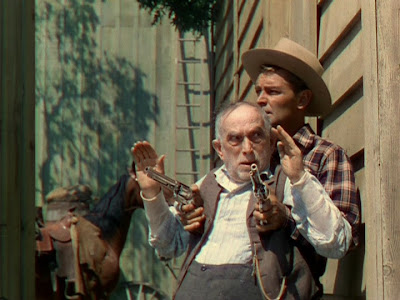 Never mind. It’s not at all bad as a Western and definitely worth a look.


The following year, after the commercial and, up to a point, critical successes of Whispering Smith and Branded, Ladd was back in the saddle in Red Mountain. 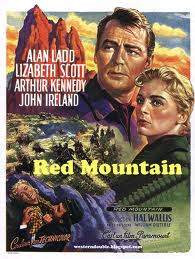 German exile William Dieterle directed and Charles Lang photographed it again. As with Maté/Lang in Branded, it was a good combination. This story is set in Colorado (shot around Gallup NM) and is very good indeed visually, as Maté pictures usually were (he had been a famed cinematographer). Stark mountains highlight the bleak wartime harshness of the tale. 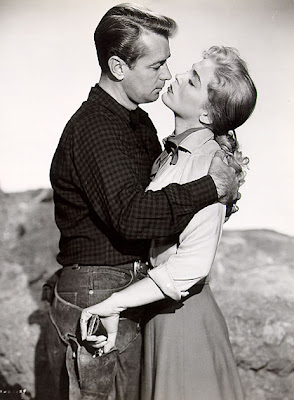 It’s quite a complex plot: at the heart of it, Ladd plays a rebel captain who joins up with Quantrill (John Ireland, very good, as usual) but, like Audie Murphy in Kansas Raiders the year before, becomes disillusioned, sees Quantrill for the psychopath he was and determines to thwart him. But the plot is complicated by Lizabeth Scott (wow, those eyes!) who is torn between Alan and Arthur Kennedy (I would have thought there would be no contest), and Quantrill having wiped out Lizabeth’s family back in Kansas. Quantrill, of course, has a devilish plan to take over the whole West for the Confederacy with the aid of renegade Indians. Clearly, the fellow is a bounder and Alan thinks he has to be thwarted (I like that word thwart, you see). 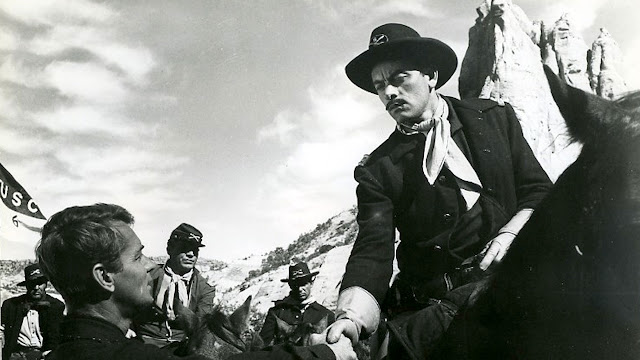 Anyway, there are many and various machinations. Once again, however, Alan Ladd looked, well, just wrong in the role. He was extremely good at the part where he is attracted to Lizabeth (well, frankly, who wouldn’t be) yet trying to deny it. And the gradual disillusionment with Quantrill (or Quantrell, it was quite a common spelling at the time: Jesse James’s mother christened her daughter Fanny Quantrell) is also well done. Alan Ladd was good at this kind of thing and the movie benefits. But what he couldn’t do was the Western action hero, the hard-bitten gunfighter or lone stranger. And that was kinda essential.


Still, Red Mountain is not a bad Western, any more than Branded was.


They both just needed Gary Cooper in them!