On the surface a melodramatic tale of range war, passion and lust, Glenn Ford’s tenth Western, The Violent Men (aka The Bandits) is saved by the very powerful performances of the principals and the visual quality of the picture. Edward G Robinson on crutches is a cattle baron and Barbara Stanwyck is his imperious wife who is two-timing Edward G with his brother, Brian Keith (excellently slimy in hair oil and thin moustache) who is himself two-timing Stanwyck with a Mexican spitfire. The daughter of Edward G & Stanwyck, Dianne Foster, has inherited a bit of the imperiousness. In fact all the women in the film are arrogant and scheming and we are tempted to cheer when they get dumped by the men or do the dumping and storm off. 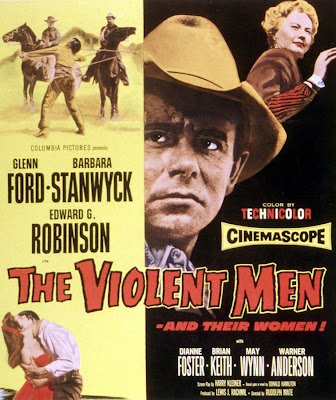 Glenn Ford, now back with Columbia for the first Western since 1949’s Lust for Gold, is a Civil War veteran recovering from wounds, a rancher willing to sell to Edward G and move east with his (scheming) fiancée until pushed too far. He is absolutely superb as the man who doesn’t want to fight but when forced to it brings military skills to the conflict.


There is a corrupt sheriff (the excellent James Westerfield) and a horrid band of murderous gunfighters who pillage the whole valley. Richard Jaeckel is very good as the homicidal young hired gun. 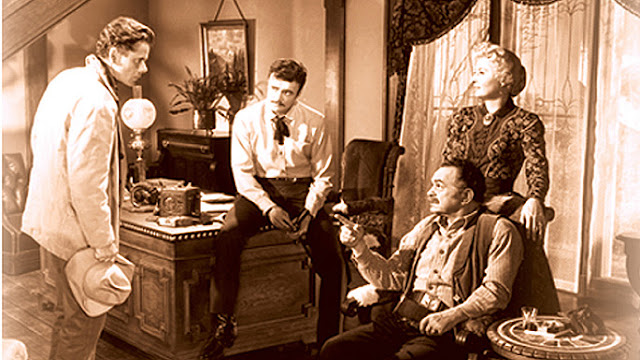 There are some spectacular shots when Glenn and his men stampede the big rancher’s horses and cattle. The film is brilliantly shot in bright color in California and around Old Tucson by W Howard Greene and Burnett Guffey. Edward G’s ranch is to die for (and he nearly does). The music is excellent too (Max Steiner). 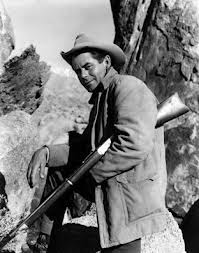 OK, the script is sensational and over-the-top and la Stanwyck is pretty awful but it’s still an exciting Western which gallops along and is well directed (Rudolph Maté, the fourth of his seven Westerns) and shot. And Glenn Ford, after the hiccup of The Americano, was back where he belonged, in the saddle in a quality, exciting, proper Western. He was at the peak of his career. In the following two years, also for Columbia, he was to produce two of his best ever Western performances, both for Delmer Daves.