The Redhead and the Cowboy (Paramount, 1951)

Rhonda's the redhead - but in black & white

After the high-quality Man from Colorado and Lust for Gold at the end of the 1940s, that superlative Western actor Glenn Ford turned in two slightly lesser Westerns, The Redhead and the Cowboy (Paramount, 1951) & The Secret of Convict Lake (Fox, 1951). One would have thought that he had built a platform with his earlier good work to go on to make some really classy oaters at the start of the 1950s. It was the time of Winchester '73 and Broken Arrow, after all, and other top-notch Westerns. But for Glenn, those came later, in the mid- and late-50s.

In this rather slight 82-minute horse opera, Glenn Ford’s sixth, he slipped back a bit into the light minor picture mode of before the War. After having done serious drama, he now appeared (free of his Columbia contract, for Paramount) in a rather silly Civil War spy/detective tale directed by Leslie Fenton, who only did four Westerns, although to be fair they did include Whispering Smith and Streets of Laredo. 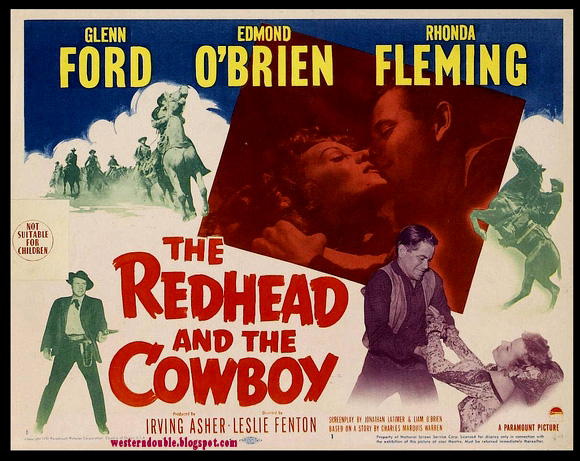 It’s a black & white picture so you’ll have to take the redhead part on trust. Glenn plays the cowboy and Rhonda the redhead, in case you’re wondering.


In the Charles Marquis Warren story, Gil Kyle (Ford) is falsely accused of murder and his only alibi is a glamorous Confederate spy, Candace Bronson (Rhonda Fleming, such a beautiful woman and a fine actress). So he has to chase her down to prove his innocence. She thinks he might be a spy too. There are mucho plot complications as they run into desperadoes, Union agents (Ray Teal is one) and guerrilla fighters, many far from scrupulous. 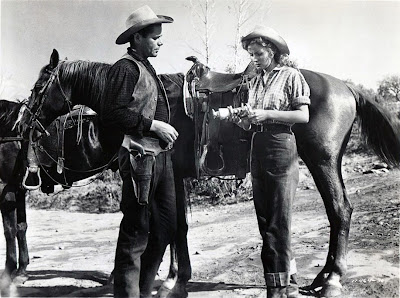 Edmond O’Brien (pretending to be a cattle buyer but obviously not) is in it and Iron Eyes Cody too. Morris Ankrum is the (rather dumb) sheriff, so there is that. And Fred Flintstone's voice (Alan Reed) is a Quantrillish Reb colonel. It has its moments. But all in all this movie and the enjoyable but hardly great The Secret of Convict Lake the same year were not really giant leaps forward in Glenn Ford’s Western career. Not that he was bad in them. He was always very good. But they weren’t quite the quality pictures he deserved. In this one Glenn, that supreme horseman, even has to 'ride' those fake horses in the studio with poor back projection. Ugh!

Greater things were to come.