The Rare Breed ought certainly to have had a parental guidance warning (to stop parents going).
Oh, James Stewart is good. He always was. And he still has his horse Pie and he’s got his proper hat back. He must have realized what a mistake it was not wearing it in Shenandoah. The trouble isn’t there. 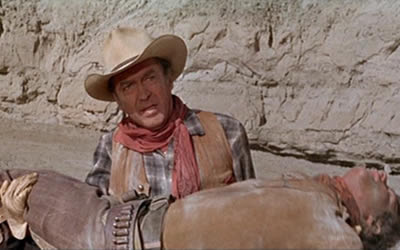 Doing the best job he could but...


It’s with the dismal acting by the very weak supporting cast, the shocking McLaglen direction, the dire screenplay by TV man Ric Hardman, and the general corniness of the whole exercise. How are the mighty fallen!
Anyone of any quality apart from Stewart is soon written out. I don’t know why Ben Johnson and Harry Carey Jr. are even credited; they only say a couple of things, then so long. What a shocking waste.
Juliet Mills is prissy. Don Galloway is bland. Maureen O’Hara tries to be an ‘English’ lady but gives herself away immediately in her very first line by saying she is from “Herefordsheer”. Actually, she was an awful Western actress. The acting is really bad. Only Jack Elam (apart from Stewart) is worth watching. For the others, you just curl up your toes and wince.


However, the whole movie is sunk, almost single-handed, by the quite dreadful Brian Keith. At least we are to assume it’s Brian Keith, under the worst fright wig ever seen. Mr. Keith was clearly an honors graduate of the Dick van Dyke School of British Accents. He is utterly appalling. Why did he do it? Why did McLaglen allow it? Why didn’t the producer veto it? Presumably they all thought it was ‘funny’.
Although the movie was another William Clothier effort, you wouldn’t know it. There is some nice California scenery and there are some good framed shots but a hell of a lot is done in the studio.
The Dodge scenes are pathetic and the 'plot' seems to be just a linking of a series of ‘comic’ fistfights.
James Stewart does his best to salvage this utter clunker but even he is fighting a losing battle. This movie is enough to give Westerns a bad name.
Like a rider thrown from his horse, it must have taken guts for Stewart to make another Western two years later. In fact he made two in 1968. First Firecreek, then Bandolero!

The Rare Breed is one of the worst Westerns I have ever seen.